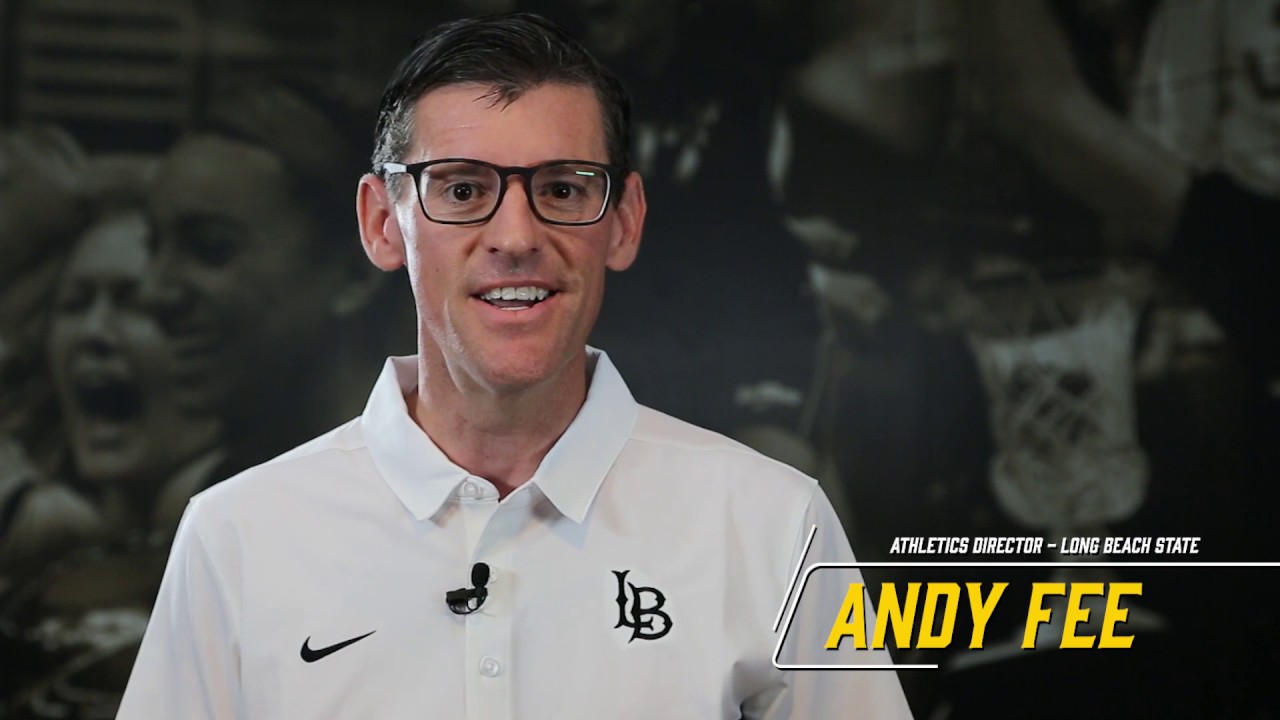 Two seasons, two national championships at the Beach under the leadership of Andy Fee, who was hired in April 2017 as the 12th Director of Athletics at Long Beach State, immediately making an impact on the fortunes of LBSU Athletics.

The eyes of the volleyball world were on Long Beach in 2019, as the Walter Pyramid and Long Beach State played host to the 50th Anniversary of the NCAA Men’s Volleyball Championship. The preseason favorites, the hosts lived up to the expectations and captured a second-straight national championship on their home floor. As a whole, the championship was a crowning achievement for the university, the City of Long Beach, and the athletics department as led by Fee.

Opening officially in October 2018, Fee oversaw the completion of one of Long Beach State’s top capital projects, the construction of the Soccer/Softball Clubhouse, giving those two programs their first dedicated locker and meeting room facilities.

Fee has paved the way for multiple other capital improvements during his time at Long Beach State. The Walter Pyramid saw some major improvements, including a brand new court design with a greater use of the school’s primary black color as well as adding the iconic interlocking LB to center court for the first time. New LED lights were installed to provide a better experience for both teams and fans while providing energy savings, and Fee was instrumental in the creation of the Courtside Sand Bar, a unique and innovative way to watch sporting events inside of the Walter Pyramid. Renovations of Bohl Diamond at Blair Field are also continuing as the project moves into phase two.

Long Beach State’s athletic programs have also found great success under Fee. In addition to the national championship claimed by Men’s Volleyball, four other teams made NCAA Tournament appearances in 2018-19 and the Beach had individuals compete in both the indoor and outdoor track and field championships as well. In all, six different programs claimed either regular season or tournament championships during conference play.

Under his watch, Fee made a change in leadership in one of Long Beach State’s flagship programs, hiring Eric Valenzuela to be the new head coach of the Dirtbags Baseball program in 2019.

Fee made his first three head coaching hires during his first year at Long Beach State, selecting Jeff Cammon to lead the Women’s Basketball program, Joy McKienzie-Fuerbringer to guide Women’s Volleyball, and Michael Wilson for Men’s Golf. In those picks, Fee was able to bring in a trio of rising coaches, including two who also had LBSU ties, as Cammon was a former assistant coach with the program while McKienzie-Fuerbringer was an All-American and National Champion as a player at LBSU.

Also significant was his decision to give Men’s Basketball head coach Dan Monson a five-year extension. The decision aligned with Fee’s goals, retaining a coach that runs a program with integrity as well as the winningest coach in LBSU history. Care was taken to refocus on the elements that have been the recipe for success at Long Beach State, as well as to refine a deliberate scheduling philosophy for the program.

Fee’s reputation among collegiate leadership continues to rise in prominence, illustrated by his appointment to the NCAA Division I Men’s Water Polo Committee, where he began service in 2018.

With an extensive background in athletics administration with an emphasis on development and operations, Fee came to the Beach after seven years at UC Santa Barbara, departing as the Deputy Athletics Director.

At UC Santa Barbara, Fee managed a staff of five responsible for the fundraising efforts for all endowments, capital projects, annual giving and planned gifts, with his personal focus directed towards major gifts. In his last year at UCSB, Fee helped raise $4.7 million. His role as deputy athletic director also meant a large role with strategic planning for the athletics department.

Prior to his move to UC Santa Barbara, Fee served as the Associate Athletics Director for Facilities and Operations at the University of San Diego. Fee oversaw all athletic operations including event management, master planning, scheduling, maintenance, and purchasing for the department’s athletics venues.

At both UC Santa Barbara and USD, Fee was tasked with sports supervision, providing general oversight of budgets, scheduling and fundraising for his assigned programs, which most recently included Men’s Soccer at UCSB.

Before his move to San Diego, Fee worked at Arizona State University in operations while he completed his B.A. from ASU and an M.A. in Education from the University of Phoenix. A native of Laguna Niguel, Calif., Andy and his wife, Nicole, reside in Long Beach along with their dog Sparky.

April 20, 2020 Adam Grossman the Chief Executive Officer is B6A’s founder and recognized industry leader. He co-authored The Sports Strategist: Developing Leaders For A High-Performance Industry. His work has been featured in Forbes, SportsBusiness Journal, The Washington Post, The Chicago Tribune, and SportTechie. He also teaches at Northwestern University’s Masters of Sports Administration program. B6A’s tools and […]

March 17, 2020 The publisher of the site is David J. Halberstam, a 40-year industry veteran who himself served as play-by-play announcer for St. John’s University basketball  in New York and as radio play-by-play voice of the Miami Heat in South Florida. He is also a respected sports broadcast historian, often quoted by the daily […]

March 11, 2020 Steve Moniaci was named HBU’s fourth Director of Athletics on Feb. 1, 2010, after serving as interim director since May 2009.  In his role, he oversees the day-to-day operations of the athletic department and its 17 NCAA Division I sport programs. He came to HBU in January of 2007 as the associate director […]