The NBA Remix Collection consists of eight mashups between NBA teams and hip-hop artists who are from the same cities as the teams, including the Detroit Pistons with Big Sean, the Miami Heat with DJ Khaled and the Atlanta Hawks with Future.

Each mashup has its own capsule collections of four to five items, including t-shirts, jerseys, sweatshirts, and hats. The clothes will be available to purchase on Bleacher Report’s website and at the team stories in the NBA arenas.

Blue Wire, a new sports podcast company, has raised $1.2 million in a seed round. Blue Wire is looking to build out long-form sports narrative podcasts. The company believes that while sports highlights will continue to be mostly viewed via short video clips, more long-form sports media consumption will eventually shift to podcasts from traditional radio and print.

The seed round comes from Dot Capital, 500 Startups and some individual investors, including Prakash Janakiraman, co-founder and Chief Architect at NextDoor, and professional football player Deion Jones through his venture fund Forty5 Ventures.

Global esports revenues will surpass $1 billion in 2020 for the first time without counting broadcasting platform revenues, according to market researcher Newzoo.

The International Olympic Committee has an $897 million reserve fund to help finance sports around the world should the 2020 Summer Olympic Games in Tokyo have to be canceled as a result of the rapidly-spreading coronavirus, according to Bloomberg.

The massive fund was established in 2001 with $105 million and was set to serve as a funding stream for international sports federations that rely on the IOC to balance their budgets. In addition to the Olympics, the IOC also helps national and international governing bodies fund athletes globally.

NFL owners thought they were moving forward with a new collective bargaining agreement that would extend the regular season to 17 games. But the NFL Players Association still isn’t sold on the idea of lengthening the already grueling 16-game season, according to the New York Times.

The union’s 11-person executive committee voted 6-5 last week against recommending the deal to the 32 players representatives, according to the Times. Among those voting against it were two influential voices on the committee: Richard Sherman of the San Francisco 49ers and Russell Okung of the Los Angeles Chargers.

“While the NFL is laughably trying to sell 17 games for a profit, how about we discuss how 16 and less games played out for a generation of players,” tweeted Okung.

In 2021, Seattle will have a new hockey team. And when hockey fans head to a game at the new arena where the team will play, they could choose to sit in some traffic on the freeway and pay for parking downtown, or they could hop on a bus or light rai completely free of charge. NHL Seattle (the team doesn’t have a name yet) will be the third sports franchise in the country to offer free public transit to those going to games, as a way to ease traffic congestion in the city, increase access for fans, and do something good for the environment.

Serena Williams, Usain Bolt, Michael Jordan and Leo Messi are just some of the big names gracing the international marketing push for the sports drink as it looks to “reinforce the brand and its history” of supporting top athletes.

Gatorade has just funneled big budgets into a start-studded campaign designed to take it through to the second-half of the year. PepsiCo detailed how in 2019 it has upped marketing spend across its brands to the tune of 12%. This year, however, its chief financial officer said it would be making cuts and investment would go into its “classic brands”.

NFL owners and the NFL Players Association are nearing a collective bargaining agreement. Media companies and the NFL have been waiting for the CBA’s approval before negotiating new broadcast rights for NFL games, which are locked up until 2022.

The results will have a major impact on traditional media as millions of Americans cut the cord on pay-TV each year. Owning live football games is crucial for networks like ESPN to charge expensive affiliate fees to pay-TV distributors, and for Fox and CBS to remain viable against deeper-pocketed competitors like Disney and Comcast. 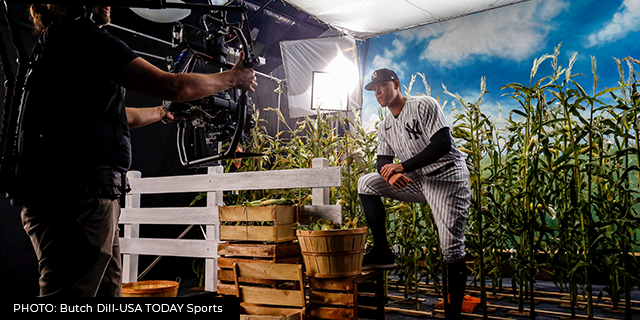 There’s life beyond the New York Yankees and Chicago White Sox for the stadium at the “Field of Dreams” movie site in Dyersville, Iowa. The field, surrounded by corn, will host the two ball clubs on August 13 and the Des Moines Register reported the organizers, Go The Distance, expect to make a bid for more baseball.

While the 8,000-seat stadium is being built next to the movie site specifically for the MLB game, Weinberg said the company hopes to use it for fantasy camps and youth baseball and softball.

The Iowa High School state baseball tournament is currently held at Principal Park, the Triple-A Iowa Cubs stadium in Des Moines. That agreement is in its last year, and Weinberg said there have been discussions to host the tournament at the site.

Beyond baseball, community fairs and concerts have been discussed for the site that already hosts baseball fans from across the U.S.

After 50 tackles and three more INTs during the 2011 season which helped propel the University of Virginia Cavaliers to their first bowl game in four years, Bleacher Report published a story that spring entitled: “Chase Minnifield: 6 Traits That Make NFL Draft Prospect an Ideal Pro.”

After talks to sell 80 percent of the New York Mets for $2.6 billion to hedge-fund billionaire Steve Cohen fizzled last month, new potential buyers have emerged including the likes of Alex Rodriguez and James Dolan, according to the New York Post.

For Dolan, the interest lies more in the Wilpons’ ownership stake in the SNY cable-TV network than owning the team itself, according to the Post. Dolan, who made his money in the TV industry with Cablevision, sees MSG as a more valuable acquisition target if he is able to merge MSG Network with another local sports channel.

Seeing the Mets on MSG wouldn’t be an unfamiliar sight as the network aired some Mets games from 2002 to 2005. Since SNY launched in 2006, MSG has not aired a big-league baseball game.

DuBoef told ESPN that the bout, which saw a sell-out crowd of 15,816 pack into the MGM Grand Garden Arena in Las Vegas, generated just north of US$16.9 million in ticket revenue, dwarfing the reported US$3.5 million gate receipts from the first fight.

More than half of NFL teams will by next year be located in or near jurisdictions that have legalized betting. While the league’s rule change doesn’t allow teams to place betting kiosks inside their stadiums, it could be a step in that direction as the league opens its doors to the industry.

The NFL is expected to begin negotiating new licensing agreements with media broadcast partners early in 2020. However, CBS finds itself in a precarious position, according to The Observer.

The network was able to raise ad rates by 7.4% for the 2019 season, benefiting from NFL TV viewership’s improvement of 4% overall during the year.

However, with licensing fees expected to double from $1.1. billion, CBS Viacom may not have the funds to outbid larger rivals like Disney and Comcast, the publication says – citing the media giant’s smaller market cap.

Sports That Matters Powered By  INTERTOPS Sign-Up | Make a Deposit | Get Bonuses December 19, 2019 One Big Thing: Patriots coach Bill Belichick had little to add to what he’s already said about the NFL’s investigation into New England’s production team filming the Cincinnati Bengals’ sideline in Week 14. (READ MORE) by Henry McKenna […]

Sports That Matters Powered By  INTERTOPS Sign-Up | Make a Deposit | Get Bonuses November 19, 2019 1932 Joe Kershalla scores 71 points in a college football game 1953 US Supreme Court rules (7-2) baseball is a sport not a business 1978 “The Miracle at the Meadowlands”, Eagles Herman Edwards returns a fumble for a touchdown with 31 […]