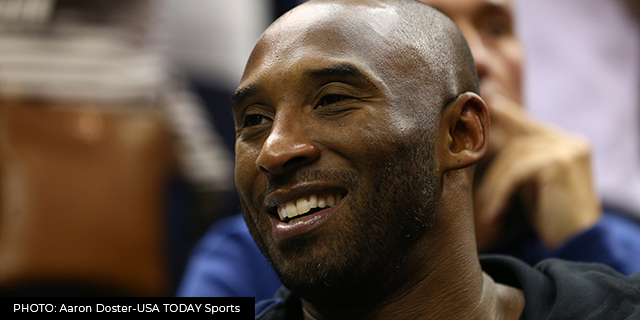 “For 20 seasons, Kobe showed us what is possible when remarkable talent blends with an absolute devotion to winning.  He was one of the most extraordinary players in the history of our game with accomplishments that are legendary:  five NBA championships, an NBA MVP award, 18 NBA All-Star selections, and two Olympic gold medals.  But he will be remembered most for inspiring people around the world to pick up a basketball and compete to the very best of their ability.  He was generous with the wisdom he acquired and saw it as his mission to share it with future generations of players, taking special delight in passing down his love of the game to Gianna.

“We send our heartfelt condolences to his wife, Vanessa, and their family, the Lakers organization and the entire sports world.”

In the country where he grew up, Kobe Bryant will be mourned for an entire week. The Italian basketball federation said Monday it has ordered a minute’s silence to be observed for all games “in every category for the entire week.”

Italian Basketball Federation’s president Giovanni Petrucci said, “We are shocked and saddened by what happened to him and his daughter Gianna and we hold his family close to our hearts in this moment of sorrow.”

“As I try to write this post, my mind is racing,” Johnson wrote on Twitter. “I’m in disbelief and have been crying all morning over this devastating news that Kobe and his young daughter, Gigi have passed away in a helicopter crash. Cookie and I are heartbroken.”

“Words can’t describe the pain I am feeling. I loved Kobe, he was like a little brother to me. We used to talk often, and I will miss those conversations very much. He was a fierce competitor, one of the greats of the game and a creative force. Kobe was also an amazing dad who loved his family deeply and took great pride in his daughter’s love for the game of basketball.” Basketball Hall of Famer Michael Jordan in a statement.

“The crash was a tragedy for multiple families. My heart goes out to Vanessa and the families that lost loved ones. Kobe was a chosen one- special in many ways to many people. Our relationship as coach/player transcended the norm. He went beyond the veil.” A statement from former Laker coach Phil Jackson

Shaquille O’Neal mourned the death of his former Lakers teammate today on Twitter. There’s no words to express the pain I’m going through with this tragedy of losing my neice Gigi & my brother @kobebryant I love u and u will be missed. My condolences go out to the Bryant family and the families of the other passengers on board. IM SICK RIGHT NOW.

“He was in constant pursuit of doing something special and there will never be a greater warrior in our sport,” said Mike Krzyzewski, who coached Bryant on those teams after trying to recruit him to Duke.

Tiger Woods was told of Kobe Bryant’s passing by his caddie Joey LaCava coming off the 18th green at Torrey Pines on Sunday at the Farmers Insurance Open. “Joey just told me coming off 18th green,” Woods told CBS. “I didn’t understand why the people in the gallery were saying, ‘Do it for Mamba.’ But now I understand. It’s a shocker to everyone. Unbelievably sad and one of the more tragic days.”

“Kobe was a legend on the court and just getting started in what would have been just as meaningful a second act,” former President Barack Obama tweeted. “To lose Gianna is even more heartbreaking to us as parents. Michelle and I send love and prayers to Vanessa and the entire Bryant family on an unthinkable day.”

Former Lakers star Kareem Abdul-Jabbar tweeted that “Most people will remember Kobe as the magnificent athlete who inspired a whole generation of basketball players. But I will always remember him as a man who was much more than an athlete.”

“Jeannine & I are absolutely shocked to hear of the loss of one of my favorite people & one of the best basketball minds in the history of the game! Our hearts and prayers to Vanessa & his girls. @kobebryant you were my biggest fan, but I was yours. #RIPMAMBA” Basketball Hall of Famer Bill Russell via Twitter

“We laughed and joked about the Mamba mentality. We’re all going to need it right now,” Clippers coach Doc Rivers said through tears before his team played in Orlando.

Madison Square Garden was lit up in the Lakers’ gold and purple colors for the game between the New York Knicks and Brooklyn Nets. Nets star Kyrie Irving didn’t play, leaving the arena after hearing of Bryant’s death.

Players around the NBA honored Bryant by holding the ball for 24 seconds one of his jersey numbers for a 24-second shot clock violation at the start of games.

Atlanta Hawks All-Star guard Trae Young, who usually wears No. 11, wore Bryant’s other number Sunday night, No. 8, before Atlanta’s game against the Wizards. He changed back to his own number for the game.

Philadelphia 76ers center Joe Embiid said that he started playing basketball after watching Bryant in the 2010 NBA Finals. “I had never watched ball before that and that finals were the turning point of my life,” Embiid wrote on Twitter. “I WANTED TO BE LIKE KOBE. I’m so FREAKING SAD right now!!!!”

Nike statement, “Kobe was one of the greatest athletes of his generation and has had an immeasurable impact on the world of sport and the community of basketball. He was a beloved member of the Nike family. We will miss him greatly. Mamba forever.”

BodyArmor statement, “Kobe Bryant was more than a legend to us.”

Gavin Newsom, the governor of California, and First Partner Jennifer Siebel Newsom issued a statement regarding about Bryant that read: “We mourn the tragic and untimely death of a California icon and basketball legend, Kobe Bryant. In his 20-year career with the Los Angeles Lakers, he made history with raw talent and unparalleled dedication that raised the bar and paved the way for a newer generation of players.”

Syracuse University men’s basketball coach Jim Boeheim previously worked with Bryant with Team USA. “He was not only one of the greatest basketball players ever, he was also the hardest working player I’ve ever been around,” Boeheim tweeted. “I was so fortunate to have known him and coached him with Team USA. Our thoughts and our prayers are with his wife, Vanessa, and the Bryant family.”

Nick Kyrgios wore a Lakers No. 8 jersey to honor Kobe Bryant ahead of his Australian Open match against Rafael Nadal.

Fifteen-year-old Coco Gauff had Bryant’s numbers 8 and 24, along with the inscription “Mamba Mentality,” on her shoes in a doubles match at Melbourne Park.

“We laughed and joked about the Mamba mentality. We’re all going to need it right now,” Clippers coach Doc Rivers said through tears before his team played in Orlando.

Pau Gasol, a former teammate of Bryant’s during those series, tweeted, “Beyond devastated… my big brother… I can’t, I just can’t believe it.”

“A true gladiator in our lifetime. You will be forever in our memories, our children’s memories, and generations to come.” — rapper Wyclef Jean via Twitter

Sports That Matters July 29, 2019 Welcome back! NEWS Los Angeles Lakers superstar Anthony Davis says if he doesn’t win a championship during his NBA career, it will be one of his “biggest failures” in life. The Anthony and LeBron James will try and lead the purple-and-gold to a title in 2019-20. “I don’t think I have […]

Sports That Matters POWERED BY Intertops Sign Up, Make a Deposit, Redeem your Bonus August 12, 2019 Team USA is looking to pull off a FIBA World Cup three-peat, which has never been done in the 69-year history of the event. Head coach Gregg Popovich with assistants Steve Kerr, Lloyd Pierce, and Jay Wright will […]