1990 “The Body Bag Game” – after Eagles coach Buddy Ryan threatens beating Redskins so badly “they’ll have to be carted off in body bags” the Eagles defense score 3 touchdowns winning 28–14, knocking 8 Redskins out of the game 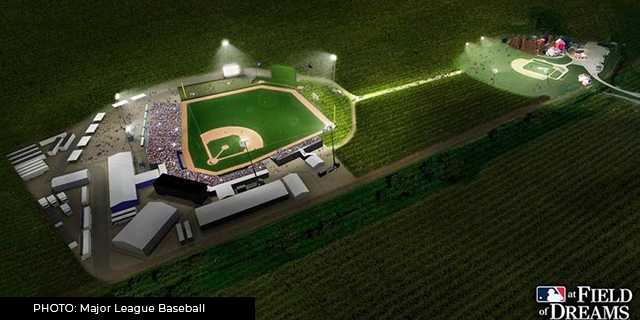 MLB will host the first major league baseball game at the Field of Dreams site in Iowa in August between the Chicago White Sox and New York Yankees.

However, the game won’t be played on specifically on the iconic diamond from the 1989 movie – rather, it will be on a temporary 8,000-seat stadium just a short walk from that site.

That is raising hopes that when they build the temporary stadium, more baseball will come to the area. (READ)

Almost nobody loves statistics like NFL fans, and the league and NBC have one for you today straight outta Sunday Night Football. (READ)

Bleacher Report’s soccer property B/R Football will debut an interactive show on its YouTube channel on Nov. 12. The series is part of the WarnerMedia-owned sports publisher’s recent shift to produce more mid- and long-form programming for platforms like YouTube rather than shorter fare made for social platforms like Instagram, said Travis Rettke, gm of B/R Football. (READ)

The United States women’s national team (USWNT) have been given a boost in their ongoing equal pay lawsuit against US Soccer after being granted class certification by a California district court. (READ)

We have reached a point in the season where there are a lot of games available for college football betting before Saturday. There are two games every day between now and Saturday, giving us eight games to bet on before the other 42 games on Saturday.

Just like me, you guys don’t want to wait until Saturday, right? Especially when we can make some money on college football betting before the weekend. (READ)

The National Hockey League (NHL) has teamed up with digital sports agency Seven League to grow its presence in Europe.

Sports That Matters POWERED BY Intertops Sign Up, Make a Deposit, Redeem your Bonus August 12, 2019 What’s New Throughout much of the summer, we have heard that the Cowboys have not made much progress in contract talks with their top extension-eligible players. However, a report from earlier this week suggested that Dallas had a decent shot […]