The NFL told Odell Beckham and Jarvis Landry to change their shoes at halftime or they won’t be allowed to play. 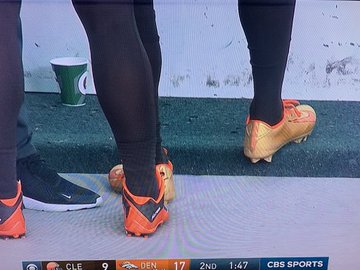 Odell Beckham Jr. and Jarvis Landry wore cleats during the first half of Sunday’s game against the Denver Broncos that were a violation of the NFL’s uniform policy, and the two receivers were told to change the footwear at halftime.

The NFL allows players to wear custom footwear during the week that is designated the “My Cause My Cleats” movement, which is meant to help players raise money for charities of their choice. Players must otherwise stick to the uniform policy or be subject to fines and/or in this case being forced to sit.

Sports That Matters Powered By  INTERTOPS Sign-Up | Make a Deposit | Get Bonuses August 29, 2019 The Houston Texans appear to have alienated Jadeveon Clowney with their recent actions, and it may mean he misses some regular-season action. According to Mike Garafolo of NFL Network, Clowney is not happy that the Texans have put him out […]

Sports That Matters Powered By  INTERTOPS Sign-Up | Make a Deposit | Get Bonuses September 9, 2019 Making history in season opener, Lamar Jackson becames the first Baltimore Ravens QB to finish a game with a perfect passer rating (158.3). Jackson was 17 of 20 for 324 yards passing, with 5 TDs and no interceptions. […]