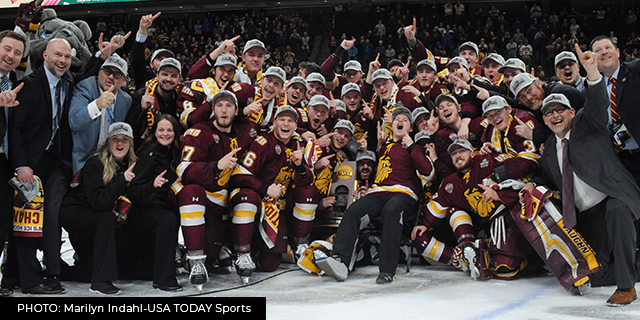 College Hockey news wrote in May that a Vegas bid was coming, and Las Vegas Convention and Visitors Authority representatives told FOS the city would push for NCAA events now that states with legalized gambling can host championships.

There’s a strong push for hockey of all levels by the Vegas Golden Knights organization, as Nevada youth hockey participation has skyrocketed and owner Bill Foley has broken ground on a second ice facility and already planning for a third.

Expected bids is a lengthy list of expected bids in its article announcing the bid process. Among them were plenty of traditional hockey cities like Chicago and New York.

The next three tournaments are in traditional hockey markets: Detroit, Pittsburgh and Boston. Buffalo, New York hosted this year.

Way-too-early preseason rankings have been out since before the national championship game between Villanova and Michigan, but there’s still much to sort out with the national landscape of the 2018-19 season. We’re still about two weeks away from the early-entry deadline, although the NBA draft combine will help sort out some of the guys who […]