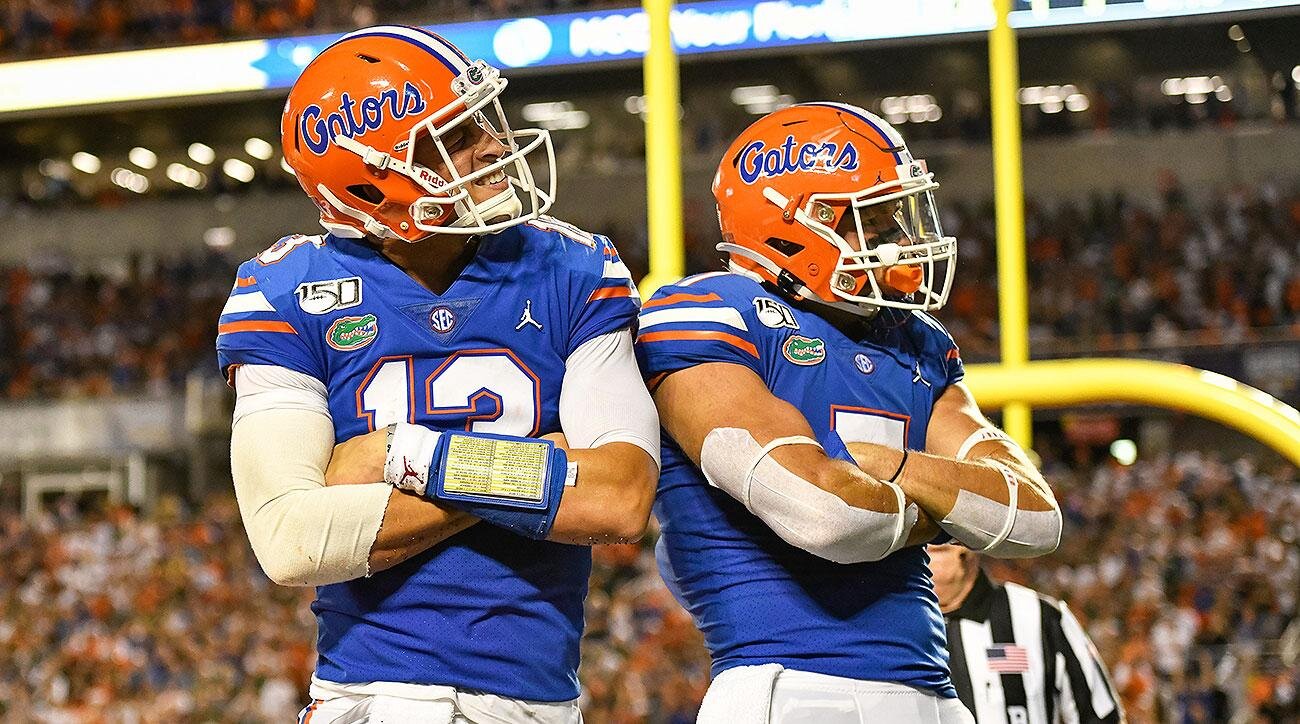 After surviving against Miami (Fla.) in an ugly start to the 2019 season, Florida falls out of the Top 25 in the post-Week 0 update of the USA TODAY Sports’ college football re-rank. (READ MORE) by Paul Myerberg

A University of Miami Hurricanes fan allegedly attacked the University of Florida marching band director Saturday night after the teams played in their college football regular-season opener, according to the Orlando Police Department. (READ MORE) by Lorenzo Reyes

No surprise here: Shea Patterson is Michigan’s starting quarterback. But backup Dylan McCaffrey also seems to be in coach Jim Harbaugh’s plans.”All options are open that way, in terms of that,” Harbaugh said Monday. “Would like to definitely play both.” (READ MORE) by Associated Press

New Liberty coach Hugh Freeze still doesn’t know if he will be on the sidelines for his debut with the Flames against No. 22 Syracuse Saturday night. Right now, he’s not even on the field. He is helping to run practices from a hotel room.

Freeze had back surgery on Aug. 16 and has been staying in a hotel near campus because he’s not allowed to climb steps, including at his home. The school’s IT department set him up with video monitors from numerous camera angles that enable him to watch practice from his room. He’s also able to speak with coaches and players during the practices via an audio hook-up and has even called plays to be run during some of the workouts. (READ MORE) by ESPN

A former Penn State team doctor is suing the school, football coach James Franklin and athletic director Sandy Barbour, claiming he was ousted after complaining to school officials about being pressured to clear players to return from injuries. (READ MORE) by Sports Illustrated

Washington State football coach Mike Leach hasn’t forgotten about what he says Texas Tech owes him. The 58-year-old discussed the situation on Twitter Monday in response to a mention of his firing in 2009. (READ MORE) by Rob Goldberg

It looked like a janitor’s closet. The inconspicuous gray door on the court level of Indiana University’s Assembly Hall easily concealed the office where the titan of college basketball watched game film and did some of his deepest thinking. By Heather Dinich, ESPN Senior Writer “The Last Days of Knight,” the latest installment in ESPN’s 30 […]

Sports That Matters July 28, 2019 Thanks for stopping by! NCAA COLLEGE FOOTBALL NEWS The LSU Tigers added an ESPN 300 defensive tackle Jaquelin Roy to its 2020 class for a second time. Roy had de-committed and now is a Tiger. Roy, a 6-foot-4, 290-pound defensive tackle from University Laboratory School in Baton Rouge, Louisiana, Roy is […]

Grinnell College Cancels The Rest Of The Football Season

Sports That Matters Powered By  INTERTOPS Sign-Up | Make a Deposit | Get Bonuses October 4, 2019 Division III Grinnell College’s football team has cancelled the remainder of the season, forfeiting its final seven games in the process. The team has a number of injuries this season. The small-school program has lost 11 of its […]