“It is with great pride that we welcome St. Louis to Major League Soccer,” Commissioner Don Garber said in a ceremony that included members of the new ownership group. “St. Louis is a city with a rich soccer tradition, and it is a market we have considered since the league’s inception.”

Soccer fans began lining up outside the Urban Chestnut Brewery in The Grove more than an hour before the party was scheduled to start. Alison Cowell is a soccer fan, she said, “I’ve been playing since I was five, I played in college this is a dream come true.”

It fulfills MLS’s long-standing pursuit of landing a team in the city, which is viewed by many as one of the historical hubs of soccer in America. While the city has produced several well-known past and present soccer players such as Taylor Twellman and Tim Ream, St. Louis has not have a top-tier pro soccer team since the now-defunct NASL’s St. Louis Stars left the city in 1977.

St. Louis’ ownership group includes Enterprise Holdings Foundation president Carolyn Kindle Betz and other female members of the Taylor family, making it the first female-majority-owned team in MLS history. The investor group is rounded out by World Wide Technology CEO Jim Kavanaugh and Enterprise Holdings executive chairman Andy Taylor. The team will begin play in 2022, and the process for selecting the team name, badge and colors will begin immediately.

Jim Kavanaugh, CEO of local tech giant World Wide Technology, also has an ownership stake in the new team. He said the league’s $200 million expansion fee as well as stadium costs, which he said could total over $200 million, will be paid by the ownership group. “Basically it’s all money raised between the Taylor family and the Kavanaugh family,” he said. 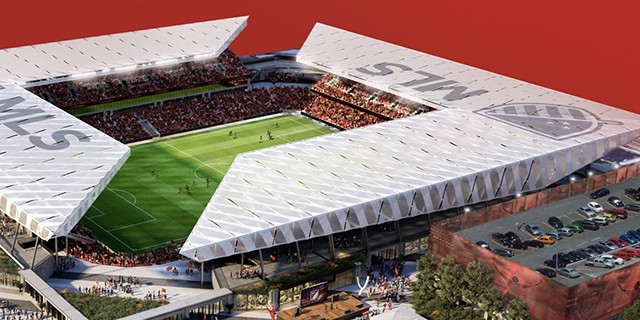 The group unveiled designs for a proposed 22,500-seat stadium in April, and Kindle Betz said updated drawings and corporate sponsorships could be released in weeks ahead. The stadium is expected to be built on state land currently used by Missouri Department of Transportation ramps connecting I-64/40 with the Downtown West neighborhood.

Patrick Rishe, director of the sports business program at Washington University, said if the team can bring in 10 to 20 percent of its fans from outside the region, the economic impact could be up to $2 million per game.

Sports That Matters July 18th, 2019 Welcome Back! 1. Major League Baseball Pete Alonso nearly crushes a home run out of Target Field in the Mets’ 14-4 win over the Minnesota Twins. Cody Bellinger has picked it back up as June and July move on. He’s up to 34 home runs to lead MLB and […]