Will Smith has packed an extraordinary number of incredible achievements into his 14 games with the Los Angeles Dodgers. A curtain call in front of a sellout Dodger Stadium crowd after his grand slam might not even top the list.

Clayton Kershaw has done a whole lot more for a whole lot longer than his rookie catcher, and he made more Dodgers history during another blowout win for the major league leaders.

Major League Baseball on Thursday suspended six players and both managers for their roles in the benches-clearing brawl between the Pittsburgh Pirates and Cincinnati Reds on Tuesday night.

Reds manager David Bell (six games) and pitchers Amir Garrett (eight games) and Jared Hughes (three games) were disciplined. Yasiel Puig, who acknowledged after Tuesday’s game that he had been traded to the Cleveland Indians before Wednesday’s official announcement, was suspended for three games.

Pirates pitcher Keone Kela got the longest ban at 10 games for “intentionally” throwing a pitch near the head of the Reds’ Derek Dietrich and later instigating the brawl. Teammates Jose Osuna (five games) and Kyle Crick (three games) and manager Clint Hurdle (two games) also were disciplined by MLB.

Just in case you missed it, here is the Reds-Pirates brawl. J.P.Morosi and Nick Swisher discuss their thoughts on the suspensions doled out on the players involved in the Pittsburgh Pirates – Cincinnati Reds Brawl, and what the MLB should do moving forward with pitchers throwing at hitters.

The Atlanta Braves were eager to show off their new relievers. They weren’t needed, thanks to Max Fried and a line of severe thunderstorms.

Fried pitched six strong innings before the rain hit, giving the Braves a weather-shortened 4-1 victory over the Cincinnati Reds on Thursday night.

Freddie Freeman hit a three-run homer in the first and Adam Duvall went deep again — his fifth homer in six games since being recalled from Triple-A Gwinnett.

Gerrit Cole didn’t lose a game in June or July and continued his remarkable run on the first day of August.

Cole pitched one-run ball over seven innings and extended his winning streak to a career-best nine games as the Houston Astros beat the Indians 7-1 on Thursday, spoiling the Cleveland debut of Yasiel Puig and the return of Danny Salazar.

The right-hander gave up four hits, all in the first four innings, and struck out four for Houston, which has the best record in the American League at 70-40. Cole (13-5) leads the majors with 216 strikeouts and has not lost since May 22.

“We just kept making pitches and trying to mix up spots,” said Cole, who has a 1.91 ERA in 13 starts since his last loss. “Although they were putting them in play for the most part, their hitters were off-balance outside of maybe four-five. It was a good night.”

Zack Wheeler is still a Met, which makes him part of a suddenly dominant starting rotation. A day after the trade deadline passed, the hard-throwing right-hander kept his club on a second-half roll.

Wheeler tossed seven innings of four-hit ball, Robinson Cano drove in two runs with a homer and double, and New York beat the Chicago White Sox 4-0 on Thursday for its seventh straight win.

The Red Sox stood pat during Wednesday’s trade deadline, and then the Tampa Bay Rays gave Boston perhaps its most crushing loss yet during a disappointing World Series defense.

Jack Flaherty didn’t panic. Instead, the St. Louis Cardinals’ right-hander simply stayed the course during a lengthy stretch without a victory.

Flaherty struck out nine in seven strong innings and catcher Matt Wieters hit a three-run homer as the Cardinals beat the Chicago Cubs 8-0 in a matchup of NL Central leaders.

The Cardinals won two games in the three-game set and claimed first in the division, a game ahead of Chicago. The Cubs have lost four of six overall and 11 of their last 16 on the road.

Flaherty (5-6) allowed just one hit and walked two in recording his first win since May 14, a span of 79 days and 12 starts.

Jake Arrieta pitched two-hit ball into the fifth but was pulled after 71 pitches because of a bone spur in his right elbow. He allowed two runs — one earned — and four hits, striking out five in four-plus innings. Jose Alvarez (2-2) and three relievers tossed five scoreless innings. 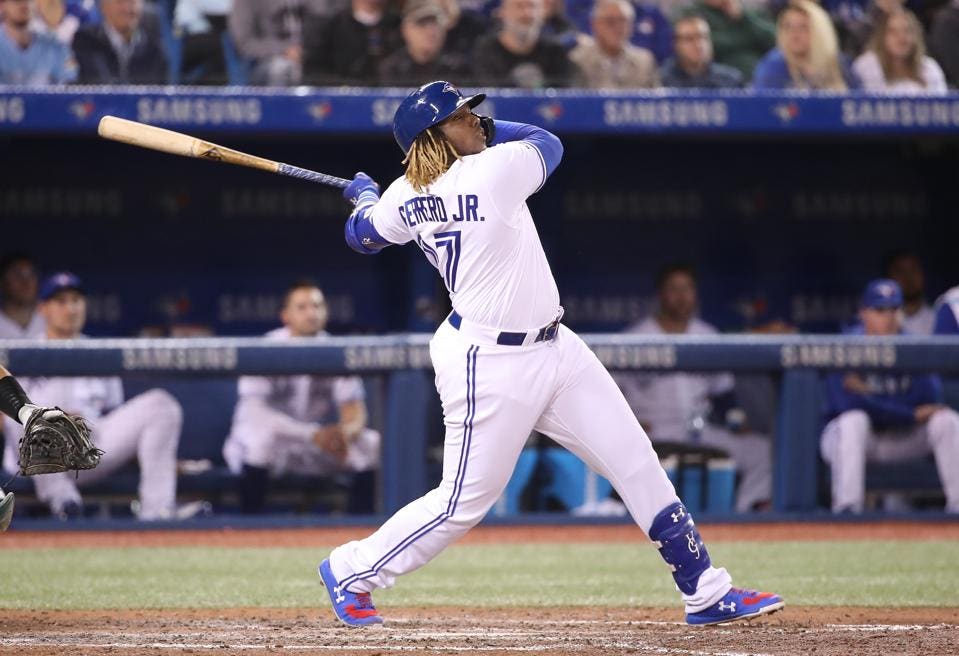 The Toronto Blue Jays have a young, dynamic team that could make a playoff run in the next couple of years.

They provided a glimpse of that potential against the Baltimore Orioles.

“That guy’s pretty good. He’s driving in runs,” Baltimore manager Brandon Hyde said about Guerrero. “They got a nice little core. They’re going to be fun players to watch here going forward, really athletic. They have a young core group of position players that are going to do damage.”

Newly acquired Twins reliever Sam Dyson caught a flight Thursday morning in Philadelphia, arrived at Marlins Park an hour into the game and found himself pitching in the ninth inning on three hours’ sleep.

Dyson blew a three-run lead without retiring a batter, and Harold Ramirez hit a leadoff homer in the 12th to send the Miami Marlins past Minnesota 5-4.

The AL Central-leading Twins revamped their bullpen after watching a whopping lead over Cleveland dwindle in the last month. Minnesota obtained reliever Sergio Romo in a trade with Miami over the weekend and acquired Dyson from San Francisco in a deadline-beating deal Wednesday.

Chapman homered off Hader in the eighth inning to break out of a long slump and Oakland beat the Milwaukee 5-3 Thursday.

“Opportune times against a tough pitcher,” said A’s third base coach Matt Williams, who filled in for manager Bob Melvin postgame. “It was a good series for us.”

Yasiel Puig was so eager to make his Indians debut, he forgot to check out his footwear before walking around the clubhouse.

The slugger was wearing Reds flip-flops with his Cleveland workout gear on Thursday, two days after being acquired from Cincinnati in a three-team trade that also included the San Diego Padres.

The Joc Pederson Experiment is essentially over. The Los Angeles Dodgers will no longer deploy Pederson as a regular option at first base, a move initially intended to get him into the same lineup with Max Muncy and Alex Verdugo.

Instead, Cody Bellinger, who has played Gold Glove-caliber defense in right field, will man first base on the days when Muncy is needed at second, manager Dave Roberts said Thursday.

Robbie Ray is still a member of the Arizona Diamondbacks, and he will get the team’s first start after the trade deadline against the Washington Nationals on Friday night in Phoenix.

Ray (9-7, 3.91 ERA) was mentioned in plenty of trade discussions before Wednesday’s deadline, but the D-backs held on to the 27-year-old left-hander and instead dealt ace Zack Greinke to the Houston Astros. That makes Ray, under team control through the 2020 season, the new ace.

Mark Sweeney and JP Morosi discuss pitcher Zack Greinke being traded to the Houston Astros from the Arizona Diamondbacks.

Sports That Matters Powered By  INTERTOPS Sign-Up | Make a Deposit | Get Bonuses December 19, 2019 The Los Angeles Angels continue with what has been a busy winter for the team. Fresh off making the splash of the offseason in signing NL MVP finalist Anthony Rendon, the Angels have added another All-Star from the NL […]

Sports That Matters Powered By  INTERTOPS Sign-Up | Make a Deposit | Get Bonuses October 10, 2019 Dodgers fans were not happy with manager Dave Roberts and they let him hear it. The Los Angeles faithful booed Roberts excessively in Game 5 of the Nationals League Championship Series after a string of pitching decisions came […]