Welcome back, thanks for stopping by!

Major League Baseball is back at full strength after All-Star break!

1949 Baseball owners agree to erect warning paths before each fence

1979 “Disco Demolition Night” at Comiskey Park: fans go wild destroying disco records and cause the White Sox to forfeit second game of a doubleheader to the Detroit Tigers

2. Major League Baseball behind the National Football in global revenue. 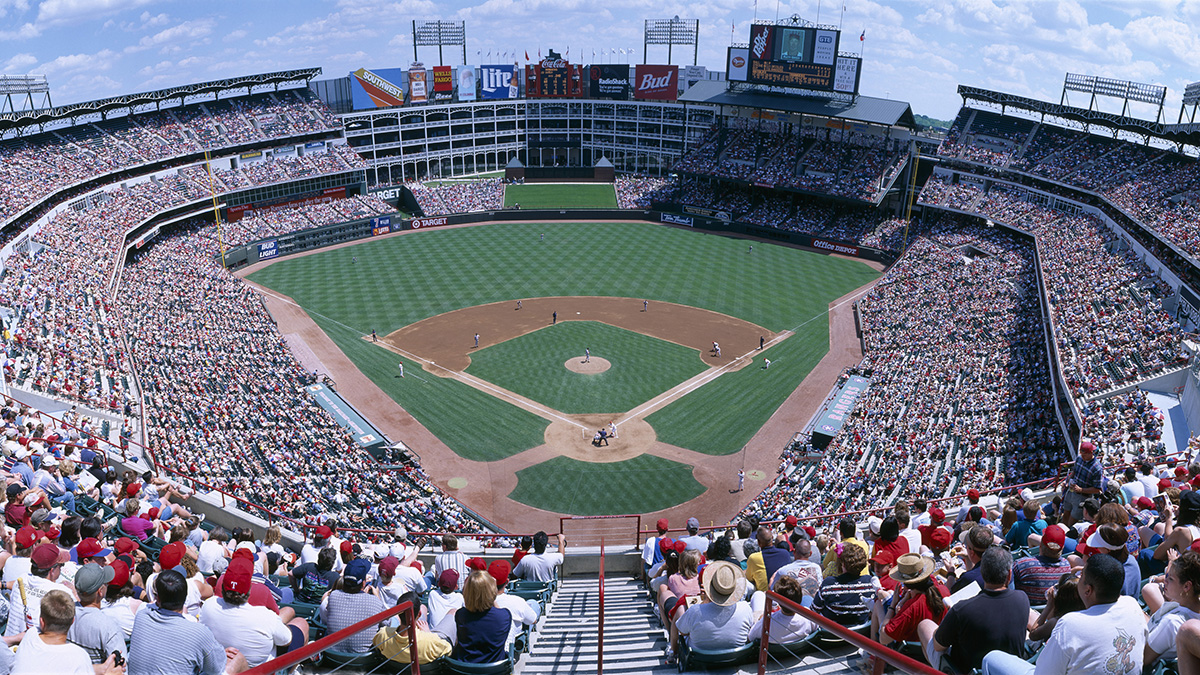 Globe Life Park, home of the Texas Rangers. (Photo by Visions of America/UIG via Getty Images)

Last time we looked at the NFL when it comes to bringing in revenue globally. The league generated $13 billion and has 29 of the top 50 most valuable sports franchises in the world.

The second-highest grossing league in the world is Major League Baseball, which grossed a little more than $10 billion in 2017. The league became the second sports league to exceed that threshold.

A big difference between the NFL and MLB is the use of regional sports networks. Baseball teams collect millions of dollars each year from regional TV networks. However, not all teams are big winners in their regional TV deals. One franchise sets the example of how to profit big off of the deals.

After signing a new television deal in 2014 with Spectrum Sportsnet LA worth $8.35 billion over 25 years, the Los Angeles Dodgers, who are the majority owner of the regional sports network, made $204 million in revenue off of TV money alone in 2016.

Only one other team, the Los Angeles Angels, collected more than $100 million ($118) in TV revenue in 2016. The after-effects of these types of contracts are massive.

The Angels signed their deal in 2012, tripling the TV revenue they received from their 10-year, $500 million contract that expired in 2011. Since more TV revenue tends to lead to a bigger payroll, the Angels shelled out a combined $331.5 million to top free agents Albert Pujols and C.J. Wilson. Five of the top 10 TV revenue teams also rank in the top 10 in payroll.

Attendance is a major revenue stream for Major League Baseball. Attendance dropped four percent in the 2018, creating the lowest overall league attendance since 2003. Seventeen of 30 teams had an attendance decrease, leading to $93.7 million in lost ticket revenue.

The average MLB ticket price has risen every season since 2006 and the average price was $32.44 in 2018. It is unclear how much the cost of attending a game is affecting the attendance numbers. The decrease in attendance also affects concessions sales. Based on the attendance decline, the league estimated almost $50 million in concession sales was lost. Excerpt from Global Sports Matters by TJ Mathewson

MUST READ ARTICLE OF THE DAY

This offseason, three of the biggest deals in baseball history were signed. Manny Machado signed with the San Diego Padres. Bryce Harper signed with the Philadelphia Phillies. Mike Trout signed an extension with the Los Angeles Angels.

Trout’s deal is for 12 years and $430 million, topping Harper’s deal by $100 million and making him the game’s highest-paid player. (READ) Global Sports Matters by Lamar Smith

There’s a growing movement among current and former Puerto Rican-born Major League Baseball players to retire the No. 21 throughout the sport. The digits were once worn by the late Roberto Clemente. (READ) Global Sports Matters by Barry M. Bloom

As discussions between the Houston Rockets and the Oklahoma City Thunder on a blockbuster deal for Russell Westbrook grew serious Thursday, Daryl Morey, Houston’s general manager, called James Harden to discuss how both stars might work together. Harden gently cut Morey off and reminded him: “I know how to play with Russ and he knows how to play with me,” Morey recounted to ESPN.com late Thursday in Las Vegas. (READ) ESPN by Zach Lowe

It’s been a busy few weeks in the NBA, as big names have been on the move ever since free agency began on June 30. The Golden State Warriors have been right in the middle of all that action, as they lost Kevin Durant to the Brooklyn Nets and then parted ways with mainstays Andre Iguodala (via trade) and Shaun Livingston (waived). (READ) For The Win, Andy Nesbitt

Where does the Heat stand in the Eastern Conference hierarchy after a flurry of trades and free agent transactions around the league? A glimpse at how the East looks after significant moves involving every team. (READ) Miami Herald by Barry Jackson

As perhaps the wildest free agency period in NBA history draws to a close, a whole new set of circumstances for a number of teams takes shape, with the latest huge domino to fall being the Oklahoma City Thunder trading Russell Westbrook (who was previously the No. 1 player on this list) to the Houston Rockets for Chris Paul (who was not on this list). In addition to the major shake-up in OKC, the NBA champion Toronto Raptors are in a starkly different situation after the departure of Kawhi Leonard. How aggressive will Toronto be about completely hitting the rest button? Will the Cleveland Cavaliers deal Kevin Love? Is D’Angelo Russell with Golden State Warriors for the long haul? (READ) CBS Sports by Brad Botkin

The NBA announced today that Jason Phillips, a top-rated referee with 19 seasons of officiating experience in the league, has been named Replay Center Operations Principal.

In his new role, Phillips will be responsible for the day-to-day operations of the NBA Replay Center in Secaucus, N.J.  His Referee Operations duties will include creating training videos and interpreting the rules of the game for officials, teams, broadcasters and media. By NBA.com

With the game tied at 2, Rizzo launched the first pitch from Matt Albers 410 feet into the right-field bleachers for his 11th home run. He now has driven in a run in each of his last eight games and has 23 RBIs in his last 22 games. This was his fourth career extra-inning home run. The […]

Atlanta Braves Postseason Just Started, And They Are Already in Trouble

Sports That Matters Powered By  INTERTOPS Sign-Up | Make a Deposit | Get Bonuses October 3, 2019 The Atlanta Braves entered the 2019 postseason full of hope and high on potential. In the regular season, the club posted its highest win total—97—since 2003. Its den of young stars, led by downballot MVP candidate Ronald Acuña Jr. in the […]

ARIZONA DIAMONDBACKS WILL HAVE A NEW STADIUM BY 2022

The team has been playing in downtown Phoenix since 1998, but Chase Field has become a contentious ballpark as of late considering the Diamondbacks sued Maricopa County in 2017, looking to break its lease based on the argument that the county hadn’t set aside enough money for stadium upkeep. By KYLE NEWMAN, The Denver Post After the Maricopa […]