1. What’s new around the world of sports. 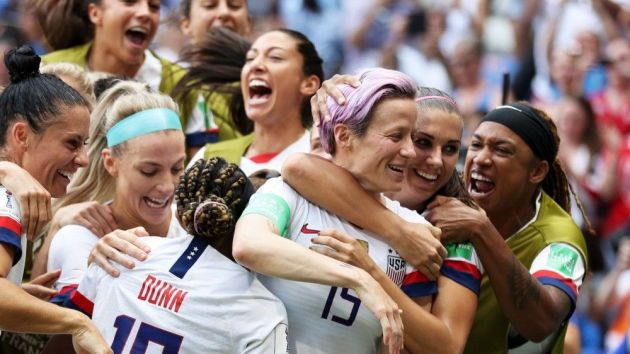 US insurance company Allstate has been named as the presenting partner for the US women’s national soccer team’s (USWNT) Fifa Women’s World Cup victory tour. (READ) by Steven Impey

The technology was originally developed to track missiles. Now, SportVU systems hang from the catwalks of 10 NBA arenas, tiny webcams that silently track each player as they shoot, pass, and run across the court, recording each and every move 25 times a second. (READ) by Mark Wilson

After a year spent hovering around Scotiabank Arena in a transparent recruiting process that likely didn’t matter to Leonard until the Clippers were able to pull off the stunning trade for Paul George to give him his preferred running mate in his preferred place of work, the Clippers thought it had all gone for naught. (READ) by Michael Grange

Kevin Durant used to be the most hated player in the NBA. A superstar jumping ship to the best team in the league will do that. According to a recent study of over 100,000 tweets, Lebron James is now the league’s leader. King James is hated in 25 states, followed by Durant in 17, Kyrie Irving in five, Anthony Davis in two and James Harden in one. (READ) by Jerry Bembry

The rookie campaigns of many newspapers’ digital sports subscriptions are over. Now comes the work of developing the standalone subscription products into long-lasting sources of revenue. (READ) by Max Willens

A California bill that would make it possible for a college athlete to profit from the use of his or her name, images and likeness passed another subcommittee hurdle in the legislative process Tuesday afternoon. (READ) by Dan Murphy

The D.C. Council approved a sole source contract Tuesday for the Greek gaming company Intralot to manage a lucrative online sports betting and lottery program in the nation’s capital. (READ) by Fenit Nirappil

Social media has become a new avenue for brands to market their athletes to obtain more value out of a deal. Using the Zoomph social measurement tools, we tracked the social media performances of the top sportswear brands over the last year. Dwayne “The Rock” Johnson comes in on top for the brand with the highest individual impression value from the brands we studied at $6.9 million. (READ) by Rob Lindner

Major League Soccer is on a roll. Last season, the league set new highs in TV viewership, average ticket price and social audience. Prospective team owners are clamoring for a share of the league even at a $200 million expansion fee, and brands have been shelling out to associate with the ascending league. (READ) by Chris Smith

For one night, the pitchers took back the power. Justin Verlander blazed 97 mph heat, Shane Bieber and Aroldis Chapman each struck out the side and the American League slowed a loaded NL lineup 4-3 for its seventh straight win in the All-Star Game. (READ) by Associated Press

2. Television is the driving force for the sports franchises.

The professional sports market produces a lot of money. In 2018 one-hundred and six sports franchises worldwide are valued at more than $1 billion each and profit millions of dollars every year.

Much of the revenue for the NFL is generated by its TV contracts. The massive viewership and ad revenue allow the networks to pay for the NFL TV rights.

The NFL brings in the most revenue globally. The league generated $13 billion and has 29 of the top 50 most valuable sports franchises in the world.

The networks pay the NFL so much money for the TV rights because people, in an era of declining TV ratings,  still watch football in the United States.

The Super Bowl is the most-watched TV program annually in America. According to Nielsen, the top-eight most watched programs in history were Super Bowls, led by Super Bowl XLIX between the Seattle Seahawks and New England Patriots on Feb. 1, 2015. The Super Bowl is 18 of the top 20 programs.

Fantasy football is another factor that contributes to the NFL’s position above other pro leagues in terms of revenue. Fantasy football creates interest in games that wouldn’t normally attract the casual fan, prompting them to tune in out-of-market games and prime time games every week. That is a big reason DirecTV pays the NFL $1.5 billion a year to stream NFL Sunday Ticket. By TJ Mathewson

3. Wimbledon gets down to the final four.

During her time at Wimbledon, Meghan Markle had security with her, with one guard warning tennis fans that they couldn’t take her picture because she was there “in a private capacity.” Among the many people who weighed in on the matter was O’Neal, who said she was disappointed by Markle’s move, noting she hoped the duchess would be the “next Princess Diana.” (READ) by Wendy Michaels

As soon as the draw was made for the men’s singles at Wimbledon, the presumption was that the final four would be Novak Djokovic, Roger Federer, Rafael Nadal and one other. (READ) by ESPN.com

When Roger Federer and Rafael Nadal meet in the semifinals at the All England Club on Friday, both will have a good reason to pause and reflect, maybe grow a little teary, as they contemplate the passage of time. (READ) by Peter Bodo

Novak Djokovic only has to look back a few months to remind himself that he shouldn’t underestimate his next opponent at Wimbledon. The top-ranked Serb will be facing Roberto Bautista Agut, a player who beat him in both of their meetings in 2019 on hard courts in Doha and Miami. (READ) by Mattias Karen

MANNY MACHADO HAS MANY SUITORS AS THE TRADE DEADLINE NEARS

The Baltimore Orioles are expected to have a busy month leading into the July 31 trade deadline. Their main item of business? Finding the best possible deal in exchange for shortstop and impending free agent Manny Machado. Predictably, the Orioles have already drummed up a bidding war for their franchise player — a busy one, […]

The NFL has warned teams that 11-on-11 training camp drills were largely responsible for last year’s spike in preseason concussions, an important data point as coaches finalize practice schedules for this summer’s practices. The league has stopped short of banning full-squad drills, which coaches consider essential to preparing for the contact that occurs during regular-season […]

THE Cincinnati Bengals’ Ki-Jana Carter No.1 In The 1995 NFL Drfat

April 22, 2020 The 1995 NFL Draft was held on April 22-23, 1995. A total of 249 players were chosen over 7 rounds. The Cincinnati Bengals chose Running Back Ki-Jana Carter from Penn State as the first pick in the draft. Future Hall of Famers Warren Sapp, Ty Law, Derrick Brooks, Curtis Martin and Terrell Davis were […]