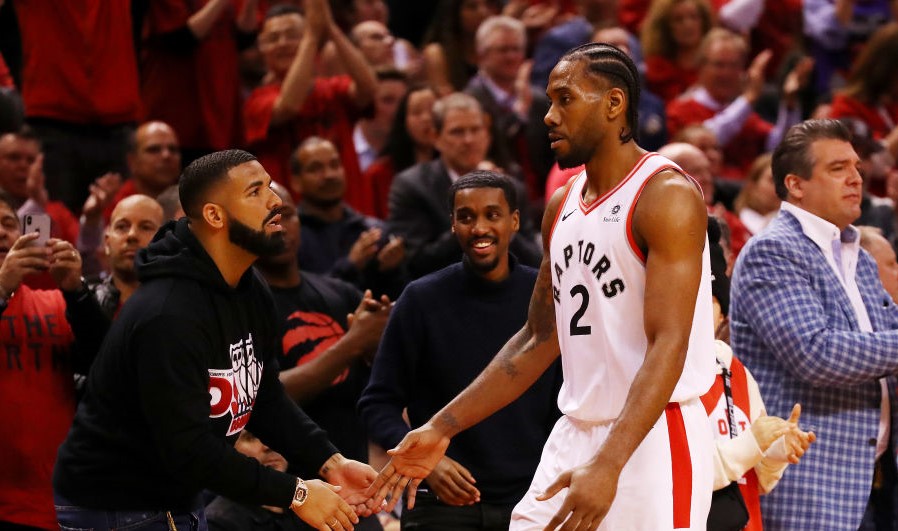 The Toronto Raptors haven’t backed off one centimeter and Drake is said to be mounting his own recruiting campaign on top of whatever the freshly minted champions are doing to convince Kahwi Leonard to stay.

This past season Leonard dropped $13.3 million on a beautiful mansion in Rancho Santa Fe, California where he is spending his offseason and hosting his suitors. Google “Kawhi Leonard house” and you will find multiple articles with pictures of the place.

Philadelphia 76ers All-Star point guard Ben Simmons and the 76ers are negotiating a $170 million, five-year extension. Simmons will make about $8.1 million this season, the last of his four-year rookie deal. Assuming the sides agree on what will be a full max, Simmons’ salary for the following season would jump to about $29.3 million and eventually rise to nearly $39 million in 2024-25.

Free-agent forward Jared Dudley has agreed to a one-year, $2.6 million contract with the Los Angeles Lakers.

According to Adam Schefter, during the first hours of free agency,
Adrian Wojnarowski was adding about 175 followers per minute on Instagram.

If Los Angeles Lakers were able to acquire Andre Iguodala on a veteran minimum deal following a buyout with Memphis that would be among the biggest steals of the offseason.

Klay Thompson is celebrating his new max deal with a special edition sneaker drop this weekend, highlighting his pre-game locker ritual of reading the newspaper.

Free-agent center Willie Cauley-Stein will sign with the Golden State Warriors.The 7-foot Cauley-Stein had played all four of his seasons in Sacramento since the Kings took him sixth overall in the 2015 draft.

The Warriors have also signed small forward Glenn Robinson has agreed to a two-year deal. Also, Kevon Looney is returning to the Golden State on a three-year, $15 million deal.

According to Bloomberg, shares of MSG Networks fell more than 6% during Monday’s trading,largely because of the fact that the team missed on marquee free agents like Durant and Irving.

Massive television and digital audiences have tuned in to watch the first three weeks of live coverage, prompting organizer FIFA to forecast a total global audience of 1 billion viewers across all platforms by the time the final whistle blows.

With Alex Morgan’s cheeky tea-sipping celebration and a postgame mobbing of goalkeeper Alyssa Naeher, the United States has moved a step closer to successfully defending its latest Women’s World Cup title with a 2-1 win over England.

The reigning WNBA rookie of the year A’ja Wilson trailed Elena Delle Donne of the Washington Mystics by less than 5,000 votes in the returns which were released Tuesday. Delle Donne was one of the two captains in last year’s All-Star Game, and her team lost to Candace Parker’s team. She received 20,337 votes, and Wilson had 15,379.

With the memory of Tyler Skaggs weighing heavy on their hearts, the Los Angeles Angels took the field for their first game since the death of the much-loved 27-year-old pitcher who got to play for his favorite childhood team.

Christian Yelich hit his major league-leading 31st homer Tuesday night, but Yasiel Puig homered to start Cincinnati’s comeback and scored the winning run in the 11th inning, rallying the Reds to a 5-4 victory over the Milwaukee Brewers.

John Sterling has called all but two New York Yankees games since taking over as the team’s radio play-by-play announcer in 1989. That streak, which began after he missed two games that first season, is about to end.

Slugger Manny Machado of the San Diego Padres sat out against the San Francisco Giants on Tuesday night after Major League Baseball upheld his one-game suspension for a confrontation with an umpire.

Major League Baseball is expanding its international outreach by opening a regional office in New Delhi, India. It is MLB’s sixth overseas office. To help engage with local fans, convert cricket players to baseball, and grow overall participation in the sport.

Major League Baseball teams are spending big bucks in the international free agent market, reportedly the New York Yankees are signing 16-year-old center fielder Jasson Dominguez. According to ESPN and MLB PipeLine he is the most highly regarded international prospect from Latin America in a decade.

Dallas Cowboys running back Ezekiel Elliott issued a statement about his meeting with commissioner Roger Goodell on Tuesday, saying he had made a poor decision in Las Vegas and needs to work harder to not put himself in such situations.

Nike struck down a plan to release a shoe featuring the original version of the U.S. flag this week at the request of Colin Kaepernick, according to a report by The Wall Street Journal.

Add Cal to the list of pro teams/college programs who are looking to ticket passes to try and help solve attendance issues. Called the “March to Victory Pass”, it will cost either $149 or $299 per person depending on location for the six home games.

Kentucky‘s Brad Calipari, son of coach John Calipari, is transferring to Detroit Mercy, where he will be able to play immediately as a graduate transfer.

Serena Williams is teaming up with Andy Murray for mixed doubles at Wimbledon. Murray’s agent, Matt Gentry, said Tuesday night that the two Grand Slam champions and former No. 1-ranked players will be partners at the All England Club.

NBC kicks off its Nascar Cup season coverage this Sunday with a race from Chicagoland Speedway on NBC Sports Network. It comes on the heels of Fox Sports posting a 2% ratings increase compared to 2018 for its first-half race schedule. The gain was a welcome change for the race series where ratings are off nearly 50% over the past decade.

A social media campaign on Adidas’ U.K. Twitter account backfires. The company was using artificial intelligence to respond to users. The retailer’s U.K. Twitter account sending out anti-Semitic messages and other inappropriate slurs to its more than 800,000 followers.

Sports That Matters Powered By  INTERTOPS Sign-Up | Make a Deposit | Get Bonuses October 15, 2019 Matt Patricia has a reputation for being conservative, but in Monday’s game against the Green Bay Packers, the Detroit Lions were anything but. The Lions burned the Packers for two big pass plays early in the first quarter, including […]

Rob Gray puts Houston on the map taking over the game with 39 points and leading the Cougars to a 67-65 win over San Diego State.  Scott Polacek of the Bleacher Report writes Tom Crean is returning to the sidelines as the new head coach of the Georgia Bulldogs, the school announced. Adrian Wojnarowski of ESPN first reported the former Marquette […]

MICHAEL BARI SPORTS SHOW April 23rd, 2019 Welcome Back! WHAT’S NEW: Kelly Stafford, the wife of Detroit Lions quarterback Matthew Stafford, says she is home after surgery to remove a brain tumor. She says the surgery lasted 12 hours and shared other details Sunday on her Instagram account. Earlier this month, she shared that an […]