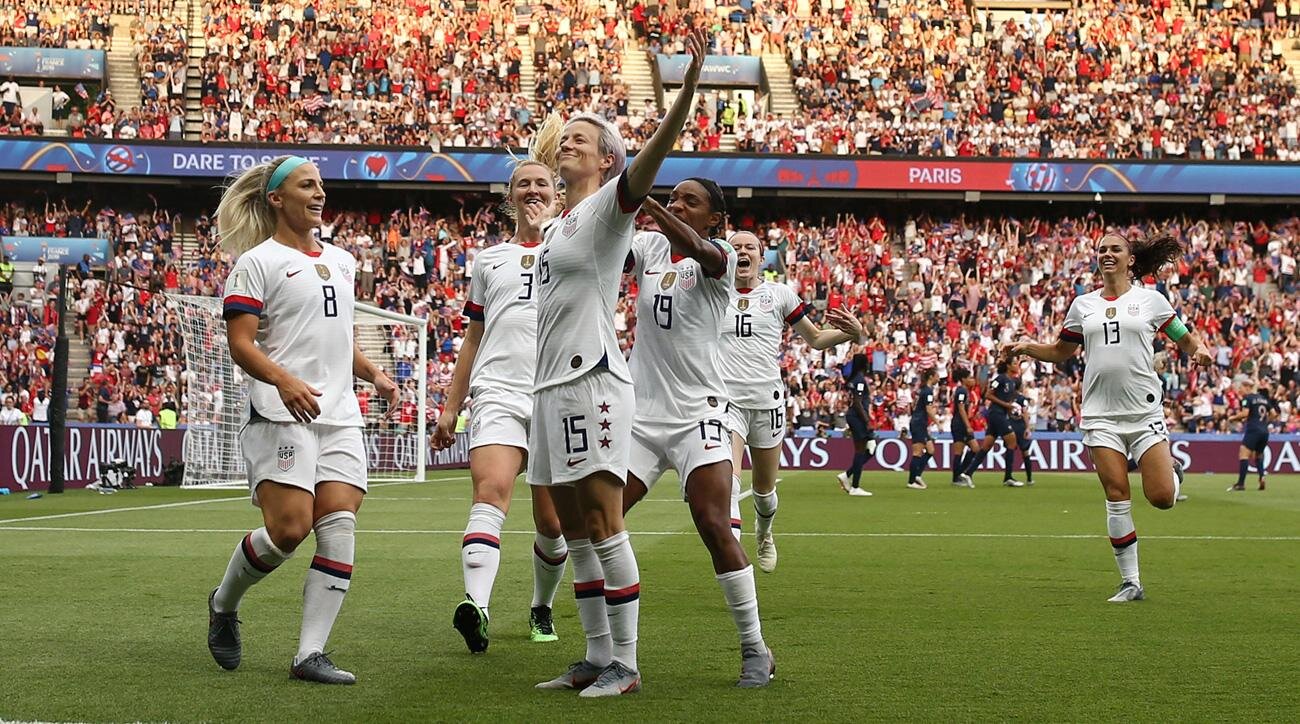 Megan Rapinoe scored twice in a 2-1 quarterfinal win over France in Paris.

U.S. manager Jill Ellis started Sam Mewis ahead of Lindsey Horan, with Alex Morgan, Rapinoe and Tobin Heath up top, and Mewis, Rose Lavelle and Julie Ertz in the midfield.

Rapinoe got the U.S. off to a perfect start inside of five minutes with a free kick from the left edge of the penalty area that beat France goalkeeper Sarah Bouhaddi.

The early goal was a good omen for the U.S. women, who had never lost a World Cup match after scoring first.

The U.S., which had scored in the opening 12 minutes in each of its four matches in the tournament.

Lindsey Horan came on for Lavelle just past the hour mark and soon after the U.S. doubled its lead on the counter-attack when Morgan played Heath in behind the French defensive line and she squared for Rapinoe to finish first time for her second goal of the match.

The goal was Rapinoe’s fifth at the World Cup.

Horan, the reigning NWSL MVP who has experience playing in France after her time at PSG, was carrying a yellow card–which doesn’t get wiped out until the next round–but the call was a big one considering her stature, no matter how influential and well Mewis has played thus far in the tournament. In the end, it didn’t work as a detriment.

The USA could have made it 3-0 about 10 minutes later, but Heath had a goal taken off the board. Crystal Dunn, surging forward from her left back spot after spending the day trying to corral Kadidiatou Diani, was ruled offside in the buildup, but replays showed she was even with the last defender, and VAR was not consulted in the aftermath.

France put up a fight in the final 20 minutes and clawed one back through Wendie Renard, who deftly redirected a header following a set piece past Alyssa Naeher in the 81st minute to cut the U.S. lead in half.

The US women’s team will face England in Lyon, France on Tuesday.

Sports That Matters Brought to you by Site Ground June 14th, 2019 Welcome back have a great weekend! Congratulations to the Toronto Raptors for winning the NBA Championship for the first time! 1. What’s New Photo: Frank Gunn/The Canadian Press via AP Kawhi Leonard and the Toronto Raptors captured the country’s first major title in […]

Sports That Matter Brought to you by Site Ground June 12th, 2019 Welcome back, NHL Stanley Cup Game 7, doesn’t get much better then that! 1. What’s new in sports media… The Athletic, the media company raised a total of $22 million more from their current investors earlier this year. What impact Stephen A. Smith’s increased […]