Once free agency starts on Sunday, the Rockets are planning to recruit Jimmy Butler to push the Philadelphia 76ers for a sign-and-trade deal that would allow the All-Star forward to join James Harden and Chris Paul in Houston. 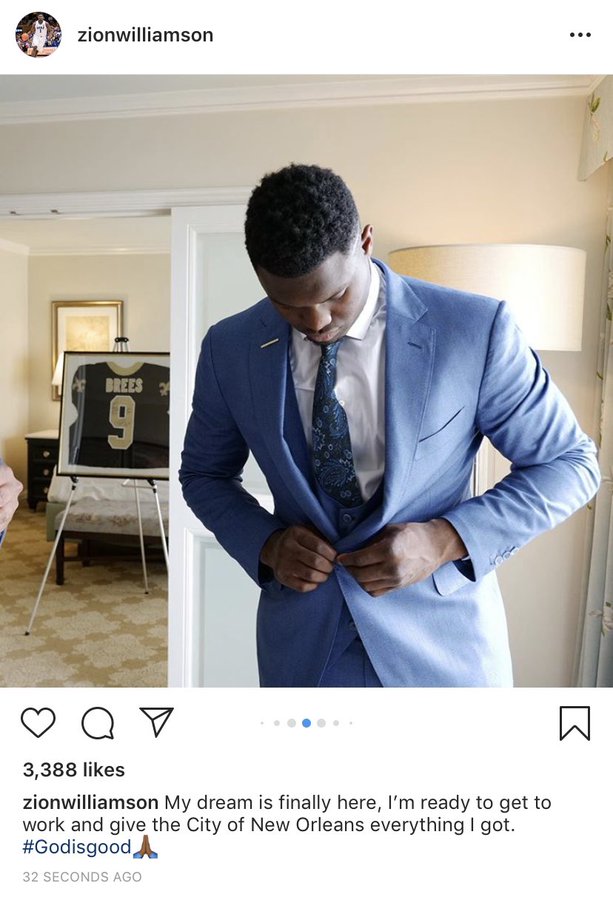 Drew Brees welcomed Zion Williamson to New Orleans with a framed jersey from the quarterback on which he wrote, “Passing the torch to you!”

Kumar Rocker struck out 11 while pitching 6 1/3 innings of three-hit ball, and Vanderbilt got to Michigan’s shaky bullpen in a 4-1 win in Game 2 of the College World Series finals Tuesday night.

Dodgers team president and CEO Stan Kasten said discussions have been ongoing since last year when the netting was extended to the far ends of the dugouts and plans will be announced “in the next couple weeks” to extend the netting even farther.

The principal owner of the Tampa Bay Rays says it’s unrealistic for his team to play full time in the Tampa Bay area, and a shared season with Montreal is the best option.

The St. Louis Blues made official Tuesday what everyone had expected the moment Craig Berube led St. Louis to a remarkable turnaround capped by the first Stanley Cup championship in franchise history.

Hayley Wickenheiser was a lock to make the Hockey Hall of Fame in her first year of eligibility and is the headliner of the induction class of 2019.

In 2018, Tom Brady and Dak Prescott were the only players in the NFL to break $2 million in royalties.

While the prospect has been on investors’ radar for sometime now, Microsoft Corp. (MSFT) is now aggressively positioning itself to be the “Netflix for Games,” a move which puts the +$1 trillion tech giant squarely within investors’ crosshairs.

Budweiser’s sponsorship of the US Women’s National Team has already earned over $180,000 in social impression value for the brand.

The organizers of the Olympic Games have signed a sponsorship deal with Coca-Cola and China Mengniu Dairy worth a combined $3 billion The two brands will jointly sponsor the event between 2021 and 2032, covering six summer and winter games.

UCLA softball player junior pitcher from Palmdale, California, Rachel Garcia has earned the Collegiate Woman Athlete of the Year award. Garcia was presented with the Honda Cup on Monday night in a ceremony at Galen Center on the USC campus.

Gino Gigante opened the Lower East Side’s Waypoint Café, which has become the hub of New York’s community of video-gamers.

NCAA president Mark Emmert recently lobbied two California State Assembly committees to postpone a bill that would allow college athletes to profit off of their names, images and likenesses (NIL). The bill, voted out of the committee Tuesday with five in favor, one not voting and one absent, would be implemented in 2023 if passed.

DJ LeMahieu and Aaron Judge hit back-to-back homers to begin the bottom of the first inning, giving the Yankees a major league-record 28 straight games with a long ball, and New York held off the Toronto Blue Jays 4-3 Tuesday night.

New York Yankees outfielder Giancarlo Stanton left Tuesday night’s 4-3 win against the Toronto Blue Jays with a right knee contusion and will have an MRI.

Manny Machado turned his butterflies into a big fly. He finished the night 2-for-4 with a walk in San Diego’s 8-3 win. The San Diego Padres star received a roaring, 40-second ovation from the crowd of 21,644, nearly double the average Tuesday night draw at Camden Yards this season.

Daniel Vogelbach hit a two-run homer to lift the Seattle Mariners to an 8-3 win over the Milwaukee Brewers on Tuesday night for their first interleague win in five tries this season.

Houston’s Gerrit Cole tried not to think too much about what it would be like to face his former team leading up to Tuesday night’s meeting with the Pittsburgh Pirates, as the Astros won 5-1.

Max Scherzer had his worst outing of the season the last time he visited Marlins Park. Scherzer struck out 10 in eight innings and won his fifth straight start, leading the Washington Nationals over the Miami Marlins 6-1 on Tuesday night.

Maikel Franco hit a go-ahead two-run homer for the second straight game, and the Phillies beat the New York Mets 7-5 on Tuesday night.

Jesse Chavez pitched into the seventh in his longest outing in over two years, and the Rangers became the latest visiting team to win in Detroit, beating the Tigers 5-3 on Tuesday night.

Madison Bumgarner struck out 11 batters in six innings and also drove in a run with an RBI single that helped lead the San Francisco Giants to a 4-2 victory over the Colorado Rockies on Tuesday night.

Shohei Ohtani will throw off a mound Wednesday for the first time since Tommy John surgery. The Los Angeles Angels announced the latest big step in their two-way star’s comeback Tuesday night.

Tampa Bay Rays starter Tyler Glasnow will be shut down for three weeks after a setback in his attempt to return from a forearm strain.

The Washington Nationals added Fernando Rodney and Jonny Venters to their 25-man roster Tuesday, hoping that the veteran relievers will help their beleaguered bullpen.

Star outfielder George Springer is returning to the Houston Astros after missing the past 27 games while on the injured list with a left hamstring strain.

The Baltimore Orioles interrupted their miserable 2019 season to introduce a sliver of hope for the future. Adley Rutschman, the top overall pick in the Major League Baseball draft.

Reigning American League Cy Young winner Blake Snell was knocked out in the fourth inning of the Tampa Bay Rays‘ 9-4 loss to the Minnesota Twins on Tuesday, the third straight outing in which the ace lefty has failed to get past the third inning.

Sunday Column: One Big Thing, On This Day, What’s New In Sports

February 23, 2020 One Big Thing: Tyson Fury became a world champion once again Saturday, and he did it by outslugging the knockout artist. In one of boxing’s most anticipated rematches in years, Fury defeated Deontay Wilder via seventh-round TKO at the MGM Grand Garden Arena in Las Vegas, capturing the WBC world heavyweight title in the […]

Sports That Matters Powered By  INTERTOPS Sign-Up | Make a Deposit | Get Bonuses November 11, 2019 Pete Alonso began the 2019 season fighting just to make the New York Mets’ Opening Day roster. He ends it as the National League Rookie of the Year after slugging a rookie record 53 home runs, driving in 120 runs […]

The Warriors are set to become only the sixth team in league history to win a championship three times within four years. That’s fantastic and dynastic. But where do the Warriors, led by Steph Curry, Kevin Durant, Draymond Green and Klay Thompson, rank among NBA dynasties? Would they be tough enough to beat Michael Jordan […]