Starved for fans despite success on the field, the Tampa Bay Rays have been given the go-ahead by Major League Baseball to look into playing a split season in Montreal.

Washington Nationals will extend their protective netting during the All-Star break after recent injuries in baseball increased the focus on fan safety.

When Texas Tech’s Taylor Floyd struck out Reese Albert to end the game and Mike Martin’s career the Florida State coach walked up the dugout steps, took off his glasses and strode across the field to shake hands with the opposing coach one more time.

The man in custody in the Dominican Republic on suspicion of shooting former baseball star David Ortiz was indicted Thursday on drugs and weapons charges unrelated to the shooting. 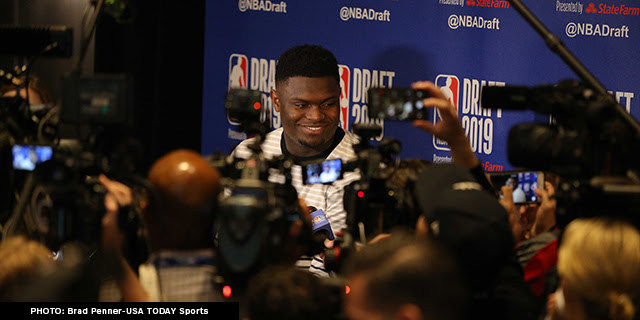 Each player that gets drafted in tonight’s NBA draft will become an overnight millionaire. Here’s a look at what each of the Top 10 players picked can expect to make in the first year of their contract based on the NBA Rookie Scale, according to RealGM.

In one of his more candid moments this past season, NBA commissioner Adam Silver confessed that he was concerned about the mental health of NBA players. “A lot of players are unhappy,” Silver told Bill Simmons at the MIT Sloan Sports Analytics Conference, attributing much of the anxiety to social media.

For an event that will cause multiple meltdowns on social media, put the reputation and job security of several executives on the line and set the table for all kinds of trades and free agent signings over the next several weeks, there is nothing in sports more overrated than the NBA draft.

LeBron James has built his business and brand portfolio. His new ad for luxury luggage brand Rimowa isn’t about craft, design, quality, and durability but rather a monologue on the road of life experiences.

The Detroit Pistons and Milwaukee Bucks have agreed to a trade that would send Jon Leuer to the Bucks in exchange for Tony Snell and the 30th pick in Thursday night’s draft.

Cavaliers owner Dan Gilbert was released from a Detroit-area hospital nearly a month after suffering a stroke and will recover at an in-patient rehabilitation center.

Clifton McNeely, the first-ever NBA Draft pick in 1947, never played one game of professional basketball. After being chosen by the Pittsburgh Ironmen with the first pick that year.

Julie Ertz was not in the lineup for the U.S. national team’s match against Sweden on Thursday night because of a hip contusion. The defensive midfielder started and scored her first World Cup goal in the team’s 3-0 victory over Chile on Sunday. U.S. Soccer did not reveal how or when she was injured.

Nikita Kucherov gratefully accepted the Hart Trophy and the Ted Lindsay Award on Wednesday night in recognition of his spectacular 128-point regular season in Tampa Bay.

Roger Federer survived a scare in his bid for a record-extending 10th Halle Open title with a 7-6 (5), 4-6, 7-5 win over Jo-Wilfried Tsonga on Thursday.

A virtual sports betting game featuring NBA highlights and footage will debut next season in U.S. and European gaming and lottery markets.

Want tickets for next year’s Tokyo Olympics? Prepare to be let down. Millions were disappointed starting Thursday when applicants in a ticket lottery for Japan residents, only began learning if they landed tickets. The answer is going to be overwhelmingly no.

Sports That Matters POWERED BY Intertops Sign Up, Make a Deposit, Redeem your Bonus August 20, 2019 Aaron Nola pitched seven innings of four-hit ball to win for the sixth time in his last seven decisions, getting three runs of support in the first inning and cruising to lift the Philadelphia Phillies over the Boston Red Sox 3-2 Tuesday night. […]

March 6, 2020 The Texas Rangers say their new stadium is 98% complete. The first public event is set for Saturday, March 14, a concert featuring Chris Stapleton and Willie Nelson. The Rangers will play the St. Louis Cardinals in an exhibition game on March 23. The regular season home opener is scheduled on March […]

February 5, 2020 LeBron James absorbed contact and tumbled to the court while his fifth 3-pointer in a three-minute span dropped. The Los Angeles Lakers’ entire roster left the bench and crossed the court, gleefully picking up their leader while a sellout crowd cheered. James scored 19 of his 36 points in the fourth quarter […]