Los Angeles Dodgers rallied to beat Chicago Cubs 3-2 Sunday night. Russell Martin singled in the go-ahead run in the eighth inning and Alex Verdugo made a game-saving catch for the final out to help the NL West-leading Dodgers take three of four.

The Padres and Rockies set a modern-era record by combining for 92 runs in a four-game series, with San Diego pitcher Matt Strahm drawing a pinch-hit, bases-loaded walk in the ninth inning to rally past Colorado 14-13 Sunday.

Thursday: A relatively pedestrian 9-6 win for the Rockies.

Friday: A stunning rally and three homers by Hunter Renfroe led to a 16-12 Padres win.

Sunday: Another huge San Diego comeback for a 14-13 win, with Jon Gray walking in the go-ahead run in his first career relief appearance.

The 92 total runs were the most ever in a four-game series in the modern era (since 1900), surpassing the 88 scored by the Phillies and Brooklyn Dodgers in May 1929, according to Elias Sports Bureau research. The final tally for the series split: Rockies 48, Padres 44.

Matt Albers allowed just one inherited runner to score in a key spot, and Eric Thames and Jesus Aguilar homered to help the Milwaukee Brewers avoid a three-game sweep with a 5-3 victory over the San Francisco Giants.

Mike Leake matched his season high with seven strikeouts in seven innings — his fourth consecutive start of seven innings or more — and Seattle rallied with four runs in the eighth inning to beat the Oakland Athletics 6-3 on Sunday.

The Royals catcher Martin Maldonado celebrated Father’s Day by wearing a blue necktie on his chest protector and had three hits to lift Kansas City over the Minnesota Twins 8-6 Sunday.

Josh Bell padded his NL-leading RBI total and helped the Pittsburgh Pirates to a series-clinching victory. Bell’s go-ahead double in the seventh lifted the Pirates over the Miami Marlins 5-4 on Sunday.

Josh Donaldson homered for the third straight game , Mike Foltynewiczallowed only one run in six innings and Atlanta beat Philadelphia 15-1 on Sunday to win the three-game series and solidify their NL East lead.

Matt Adams homered twice and drove in a career-high seven runs, Anibal Sanchez got his 100th career victory, and the Washington Nationals beat the Arizona Diamondbacks 15-5 on Sunday to split their four-game series.

Trevor Bauer pitched his first shutout as a pro, ending the longest winless streak of his career as the Cleveland Indians beat the Tigers 8-0 Sunday for a three-game sweep.

Rafael Devers led off the 10th inning with a home run after Marco Hernandez tied it with a solo shot in ninth, and the Boston Red Sox beat the Baltimore Orioles 8-6 Sunday to move a season-high five games over .500.

The Tampa Bay Rays dodged a scare from Mike Trout, and now they’re headed to the Bronx for a most crucial division showdown. Yandy Diaz hit an RBI single during Tampa Bay’s two-run eighth inning, and the Rays held off Los Angeles’ late rally to beat the Angels 6-5 Sunday.

2. Gary Woodland wins the 2019 U.S. Open as he watched Brooks Koepka on the leaderboard on the back nine.

Gary Woodland won the 2019 U.S. Open at Pebble Beach in impressive fashion, as his 3-wood on the 14th, his chip on 17, and his birdie on the final hole was the stuff of absolute legend. (READ) by Andy Nesbitt

Prior to Sunday’s win at Pebble Beach, Woodland a three-time winner on the PGA Tour — was actually 0 for 7 attempting to convert 54-hole leads into wins. He also held the 36-hole lead at the PGA Championship in 2018 at Bellerive en route to Brooks Koepka’s win and played his final round that year with Tiger Woods as he thrilled the crowd with a 64 on Sunday. Those experiences allowed Woodland to grow more familiar with championship-level golf in pressure situations, and it no doubt helped him deliver when it was needed on Sunday at Pebble Beach. (READ) by Chip Patterson, Kyle Porter

3. US Women’s soccer dominate pool play as they get set to play Sweden. 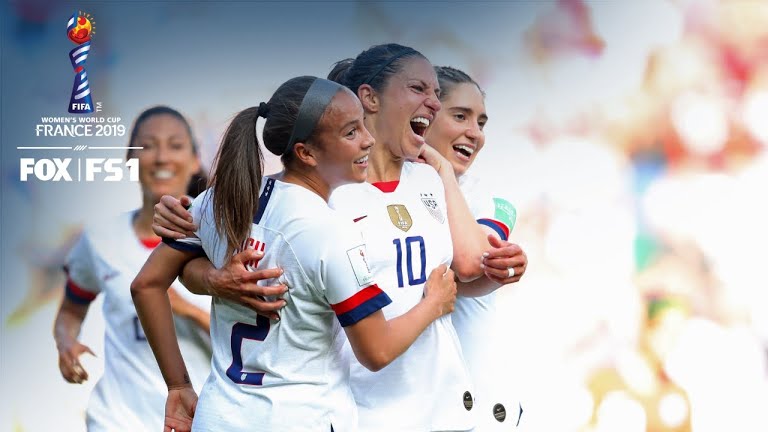 Despite wholesale changes to the starting lineup that routed Thailand, the U.S. beat Chile 3-0 to remain on top of Group F and advance to the knockout round. Both the U.S. and Sweden enter the final round of group play with six points from two wins, but the Americans possess a vastly superior goal differential.

The United States women’s national team played its second game of the 2019 World Cup this afternoon. The Americans had little trouble with Chile, winning 3-0, to increase their points total to six, locking up a knockout round push.

Jill Ellis’ team got the win with star players Alex Morgan, Megan Rapinoe and Tobin Heath, among others, on the bench. Carli Lloyd started in Morgan’s place, scoring two goals.

4. Nick Nurse confirmed Sunday that he plans to coach the Canadian national team, starting with the World Cup this summer.

Nick Nurse, 51, said his experience as an assistant coach with Great Britain in the 2012 Olympics was an impetus for wanting to coach Team Canada.

5. The Los Angeles Lakers may have enough to give LeBron James and Anthony Davis a third star in the line-up next season.

If the Lakers complete their reported deal with the New Orleans Pelicans for Anthony Davis on July 6 and Davis opts not to waive his $4 million trade bonus, the Lakers project to have a maximum of $23.7 million in cap space, according to reporting by ESPN’s Bobby Marks. That wouldn’t be enough for the Lakers to realistically target a third star to go with Davis and LeBron James.

If Davis waives his $4.7 million trade kicker, the Lakers will be able to add another star in free agency on a max contract which could be Kemba Walker.

One name that’s come up multiple times in the aftermath of the deal, is none other than Kyrie Irving, who of course partnered with LeBron James to win the 2016 NBA championship with the Cleveland Cavaliers.

Multiple reports, the team still has big plans for free agency, plans that could include names like Kawhi Leonard or Jimmy Butler.

The Washington Capitals and John Carlson agreed to a new eight-year, $64 million contract, the team announced Sunday. Carlson set career highs with 15 goals and 53 assists in 2017-18 as part of the Capitals’ first Stanley Cup Final in 20 years. He added five goals and 15 assists in the playoff run to Washington’s […]

Sports That Matters Powered By  INTERTOPS Sign-Up | Make a Deposit | Get Bonuses November 29, 2019 Hall of Fame catcher Mike Piazza is returning to the international baseball stage. Piazza will manage Team Italy in the 2021 World Baseball Classic, the Italian Baseball and Softball Federation announced Wednesday. The 51-year-old, who also announced the news via […]

Sports That Matters Powered By  INTERTOPS Sign-Up | Make a Deposit | Get Bonuses September 9, 2019 The Boston Red Sox announced that they have parted ways with president of baseball operations Dave Dombrowski. Assistant GMs Eddie Romero, Zak Scott, and Brian O’Halloran will take over as the heads of the baseball ops department for […]