Welcome back, hope your Saturday was enjoyable and you have a wonderful Sunday!

1. Lakers Land Davis From The Pelicans… 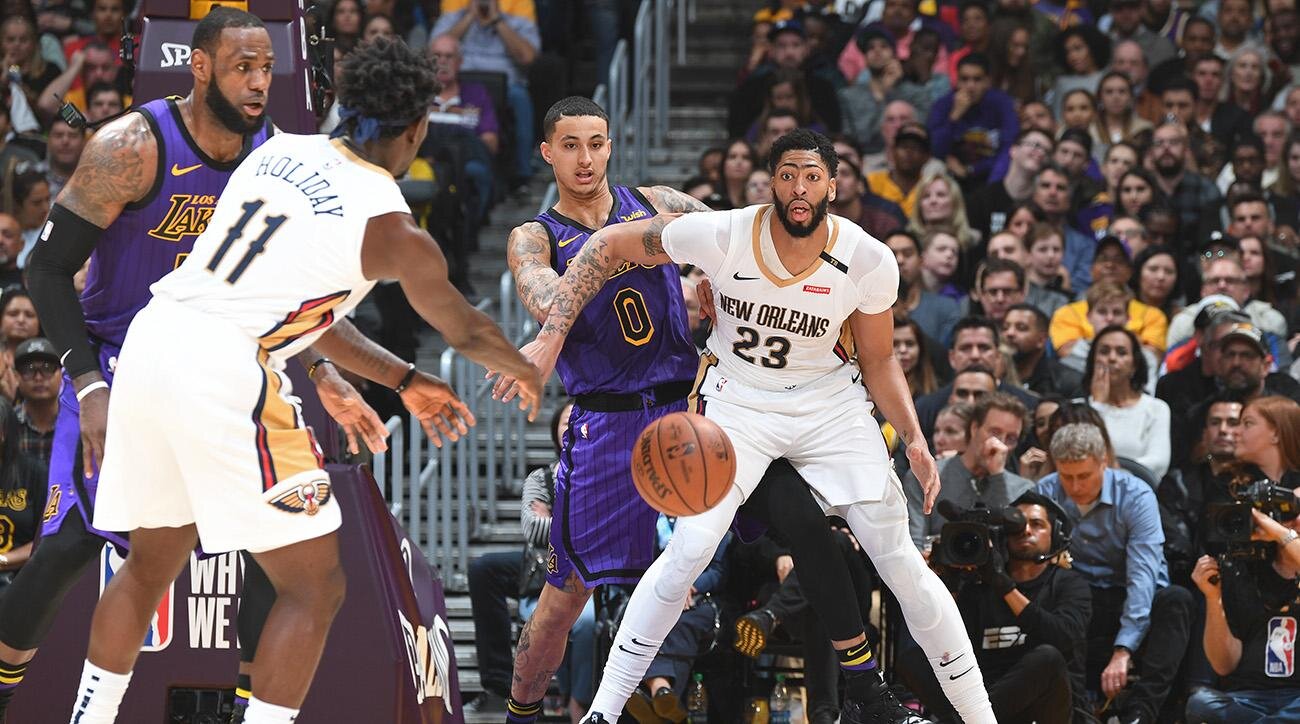 The Lakers paid a steep price to partner Davis with LeBron James: sending Lonzo Ball, Brandon Ingram, Josh Hart and the picks — including the No. 4 overall selection in Thursday’s NBA draft — to the Pelicans, sources said. The Lakers were able to hold on to forward Kyle Kuzma in the trade, which cannot be finalized until July 6.

The Lakers could afford to trade for Davis because he wants to be there, which mitigates the risk of his free agency a year from now.

There is a certain method to the opportunity the Lakers have created (as evidenced by the one-year deals given to Rajon Rondo, Kentavious Caldwell-Pope and JaVale McGee, among others, last summer), and it worked, more or less.

Part of the appeal in trading for Davis is that it preserves the bulk of the Lakers’ cap space, allowing the pursuit of yet another star. Kemba Walker is their priority, per Marc Stein of the New York Times.

New Orleans’ trade package from the Lakers represents one of the most substantial returns on a single star player in modern league history.

The final numbers are in, and the NBA Finals were a smashing success for Canada all the way around.

The NBA said Friday that 56% percent of the Canadian population watched at least some part of the NBA Finals, with an average viewership of about 8 million for the Toronto Raptors’ title-winning victory over the Golden State Warriors in Game 6.

Prosecutors will decide whether to charge Toronto Raptors President Masai Ujiri with misdemeanor battery after he was accused of shoving and hitting a sheriff’s deputy in the face while trying to join his team on the court to celebrate their first NBA championship.

Steve Kerr still considers Golden State an ideal fit for Kevin Durant. Whether Durant sees it that way going into free agency next month, Kerr isn’t about to guess. Especially now that the two-time NBA Finals MVP is headed for what could be a yearlong recovery from surgery for a ruptured right Achilles tendon.

When DeMarcus Cousins signed a one-year deal with the Golden State Warriors, it was with the intention of rehabbing from his torn Achilles and then eventually having the opportunity to compete for a championship.

Shaun Livingston Warriors guard acknowledged that injuries certainly played a major factor in the Finals, telling The Undefeated it felt like Golden State was “dying” on the court.

The New York Knicks plan on waiving Lance Thomas’ partially-guaranteed contract before his June 30 guarantee date, according to Ian Begley of SNY. However, the Knicks are open to bringing him back afterward. Should the Knicks not waive Thomas before that date, he would earn $1 million of his $7.6 million salary for next season.

Looking back at the 2018 NBA Draft, there were a few NCAA Basketball players whose stocks were considered controversial. Depending on where they were projected to be selected at, there were concerns about whether that pick would be worth it for some teams. The Arizona Diamondbacks jumped all over three-time All-Star Stephen Strasburg from the opening pitch. Ketel Marte hit two of Arizona’s four solo homers off Strasburg and the Diamondbacks beat the Washington Nationals 10-3 on Saturday.

Adam Jones also homered in the first inning, his 13th, Christian Walker hit his 12th homer of the season in the second. Kevin Cron hit a pinch-hit homer in the eighth for Arizona.

After getting off to a miserable start, Chris Sale and the Boston Red Sox are beginning to perform to their usual high standard.

Sale struck out 10 over six sharp innings, J.D. Martinez homered in a third straight game and the surging Red Sox beat the Baltimore Orioles 7-2 on Saturday.

Charlie Morton‘s luck finally ran out. He suffered his first loss in 22 starts on Saturday when the Angels hit three homers in a 5-3 victory over Tampa Bay. It was his first loss since Aug. 11, when he pitched for the Houston Astros.

The grandson of Hall of Famer Carl Yastrzemski, Mike Yastrzemski made a diving catch for the final out and catcher Steven Vogt hit two triples as the San Francisco Giants beat the Milwaukee Brewers 8-7 on Saturday.

Shane Bieber pitched impressively into the eighth inning, and Leonys Martin stole home to lift the Cleveland Indians to a 4-2 victory over the Detroit Tigers on Saturday.

C.J. Cron drove in the go-ahead run with a sixth-inning double , making Jake Odorizzi the second 10-game winner in the majors this season and capping a 5-4 comeback victory by the Minnesota Twins over the Kansas City Royals on Saturday night.

Charlie Blackmon finished with four hits for the third straight game, Ian Desmond hit a grand slam and drove in five runs, and the Colorado Rockies beat the San Diego Padres 14-8 on Saturday night in another wild Coors Field game.

Cesar Hernandez singled in two runs off Luke Jackson in the ninth inning, and Philadelphia rallied from a one-run deficit to snap the Atlanta Braves‘ eight-game winning streak with a 6-5 victory on Saturday night.

Gleyber Torres hit a two-run homer and the New York Yankees stayed perfect when they use an opener, cooling off the Chicago White Sox with an 8-4 win Saturday night.

Jeff McNeil took it upon himself and made a perfect throw from right field to home plate for the final out, and the New York Mets held off the St. Louis Cardinals 8-7 on Saturday night after starter Noah Syndergaard exited with a strained right hamstring.

Desperate for help in a failing bullpen, the New York Mets acquired reliever Brooks Pounders from the Cleveland Indians for cash on Saturday.

Frankie Montas struck out nine in six innings for his team-leading ninth win, and the Oakland Athletics beat Seattle Mariners 11-2 on Saturday night. After the game ended, the Mariners announced they had traded AL home run leader Edwin Encarnacion to the New York Yankees.

Reds rookie Nick Senzel fouled a pitch off his left eye and came out of a game against the Texas Rangers on Saturday night.

The Chicago Cubs placed right-hander Kyle Hendricks on the 10-day injured list Saturday due to right shoulder soreness after he struggled in his start the night before. 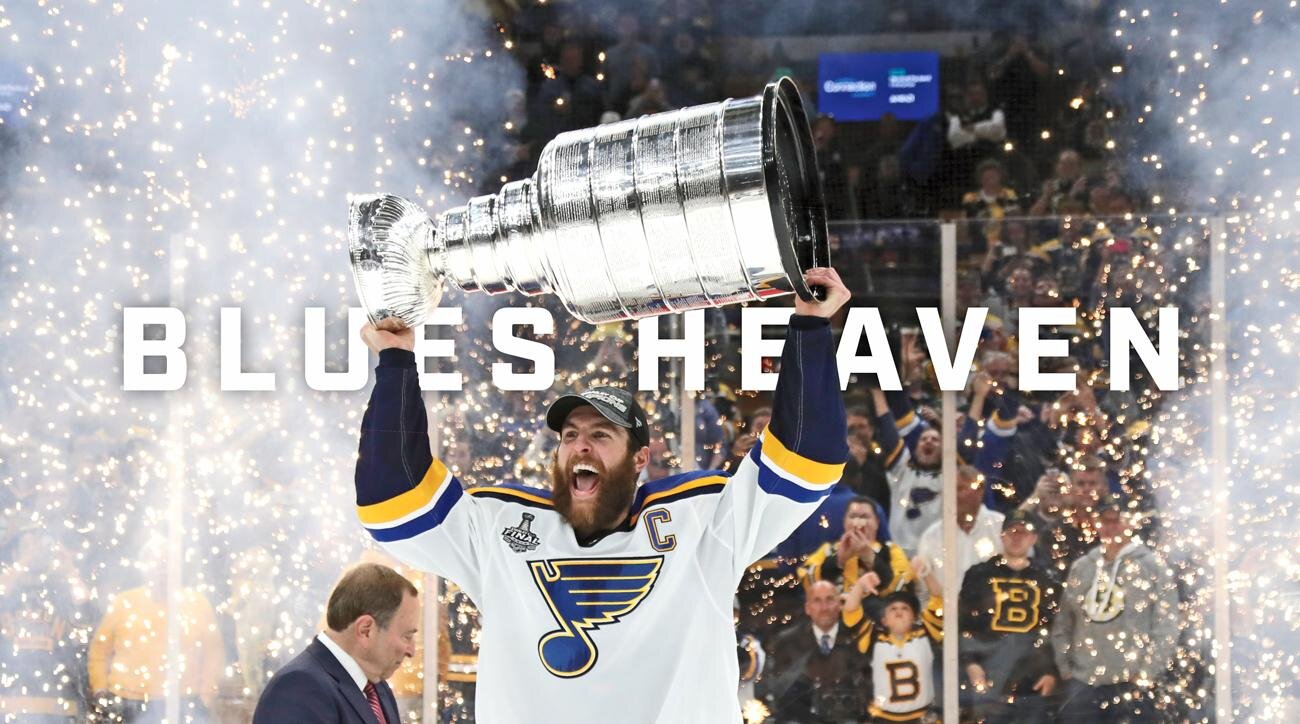 It was raining on the Blues’ parade, but nobody seems to mind. Throngs of people lined the streets of downtown St. Louis in a rainstorm on Saturday to cheer on the Stanley Cup-winning Blues. The parade will be followed by a rally beneath the Gateway Arch.

Patrice Bergeron, Brad Marchand and David Pastrnak each was dealing with an injury while completing the Stanley Cup Final for the Boston Bruins.

The St. Louis Blues lifted their first Stanley Cup trophy on Wednesday — and clinched a record for the NBC Sports Group’s NHL coverage.

St. Louis’ 4-1 defeat of the Boston Bruins in Game 7 of the Stanley Cup Final averaged a total audience of nearly 9 million viewers across TV and digital platforms to rank as the most-watched NHL game on record, according to data released this week by media-tracking firms Nielsen and Adobe Analytics.

Dion Phaneuf‘s contract was bought out by the Los Angeles Kings on Saturday. The 34-year-old defenseman had two seasons remaining on a seven-year contract he signed with the Toronto Maple Leafs on Dec. 31, 2013.

Andrew MacDonald was placed on unconditional waivers by the Philadelphia Flyers on Saturday for the purpose of terminating his contract. The 32-year-old defenseman signed a multiyear contract with the Flyers on April 15, 2014. Philadelphia acquired him in a trade with the New York Islanders on March 4, 2014.

One day after trading third-year tight end Michael Roberts to the New England Patriots for a conditional 2020 seventh-round pick, the Detroit Lions announced Friday that the deal was rescinded because conditions weren’t met. The Lions then waived Roberts, per the club.

California prosecutors will retry Kellen Winslow II on eight charges left undecided by the jury that convicted the former NFL player of rape.

The NCAA is exploring allowing its athletes to be compensated for their name, image and likeness. Ray Tanner is worried about that.

“This is personal opinion but when I see name, image, likeness it makes me feel like it is pay for play,” South Carolina’s athletics director said. “I’m like, ‘This gives me angst.’ ”

Arkansas was so close to winning its first national championship in baseball last year that Casey Martin, from his position at third base, started seeing the celebratory dogpile in his mind’s eye.

Earlier this week Stan Wilcox, NCAA vice president for regulatory affairs. announced that six Division I college basketball programs would be receiving notice of allegations for Level I violations from the NCAA by the end of the summer. Two of those programs, which Wilcox described as “high-profile,” would be receiving their notices by early July.

The NCAA expects at least six Division I men’s basketball programs will receive notices of allegations for Level I violations, the most serious infractions under NCAA rules, as a result of the federal government’s investigation into corruption in the sport.

O.J. Simpson launched a Twitter account with a video post in which the former football star said he’s got a “little gettin’ even to do.” @TheRealOJ32 ‏

Musical artist Aubrey Graham–better known as Drake–does not have an ownership stake in the Toronto Raptors , but he has been a longtime ambassador of the team and a courtside fixture at Raptors home games.

The Green Bay Packers are world famous for the fact that they are publicly owned. The Packers have another insanely famous name to add to their ranks. According to Kendra Meinert of the Green Bay Press Gazette, Paul McCartney is now a shareholder.

Did anyone actually believe this was a real possibility? No offense to Barstool, but the higher-ups in New England were not about to leak a major trade to some Boston fan-boy bloggers. That’s not how things work in Foxborough. Nonetheless, what this fake trade rumor did expose is that trading ​Rob Gronkowski-–however unlikely it appeared just […]