Austin Riley tied the game with a solo homer in the ninth inning and scored the winning run on Ozzie Albies‘ double off Michael Feliz in the 11th inning.

The Atlanta Braves past the Pittsburgh Pirates 8-7 for their sixth straight victory Wednesday night.

The Braves (39-29) took over sole possession of first place in the NL East and moved 10 games over .500 for the first time this season.

The San Francisco Giants activated catcher Buster Posey off the 10-day injured list on Wednesday before their game against the San Diego Padres.

Evan Longoria drove in the go-ahead run with an infield single in the fifth inning after San Diego made two errors, and the San Francisco Giants held off the Padres 4-2 on Wednesday night to complete a two-game sweep.

Kevin Pillar homered for the first time in more than a month and Donovan Solano had two hits and two RBI for the Giants. Buster Posey went 1 for 4 after coming off the injured list earlier in the day.

Mike Moustakas hit a two-run homer during Milwaukee’s three-run 14th inning, and the Brewers struck out 15 times against Houston ace Justin Verlander before rallying for a 6-3 victory over the Astros on Wednesday night. 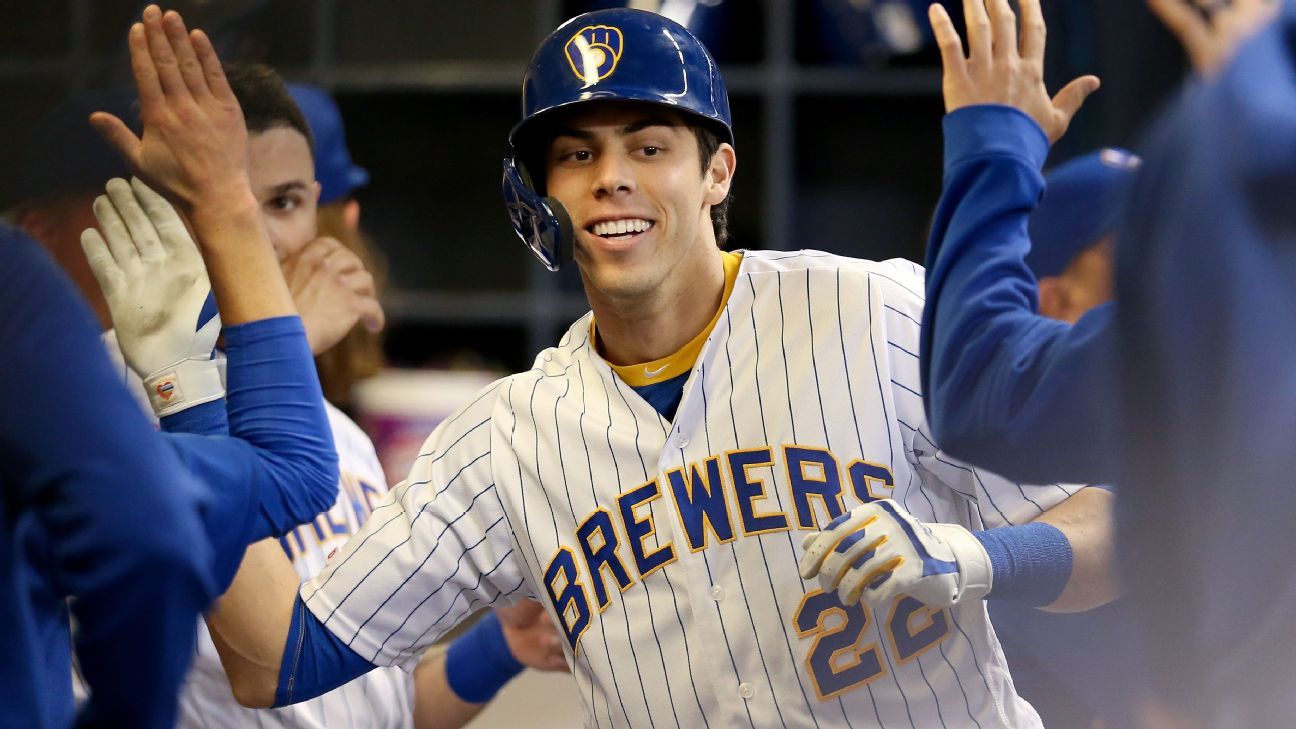 Christian Yelich started the 14th with a single against rookie Cionel Perez (1-1) for Milwaukee’s first hit since the ninth. After Ryan Braun lined out, Moustakas hit a drive to right for his 21st homer.

After loading the bases with nobody out in the eighth inning, the Detroit Tigers mustered only one run. Brandon Dixon hit a tiebreaking sacrifice fly off reliever Jake Diekman that sent Detroit past the Kansas City Royals 3-2 on Wednesday night.

Miguel Cabrera also had a sacrifice fly for the Tigers, and Ronny Rodriguez hit an RBI double. Jorge Soler drove in both Royals runs but flied out with a runner on to end the game.

Seattle got another chance in the 10th inning, and Dee Gordon ran his way to the win for the Mariners. Gordon scored on one of Minnesota’s five errors, helping the Mariners beat the Twins 9-6 on Wednesday night. Seattle went 1 for 17 with runners in scoring position and left 11 on base.

The game pitted the two worst teams in the AL East, lasted more than four hours and ended in the rain before a smattering of fans.

After 12 pitchers combined to throw 374 pitches and issue 13 walks on a soggy Wednesday night.

The Toronto Blue Jays retreated to the clubhouse at Camden Yards to savor the end of a five-game losing streak.

Miami Marlins pitcher Jordan Yamamoto had just dropped down a successful suicide squeeze bunt and was on his way back to the dugout when he stopped at the plate to pick up his bat and return it to the rack, beating the batboy to the task.

Yamamoto did it all Wednesday, earning an RBI and pitching seven innings to win his major league debut, and the Marlins broke a six-game losing streak by beating the St. Louis Cardinals 9-0. Merrill Kelly is pitching more like an ace than a 30-year-old rookie. Kelly tossed three-hit ball over 7 2/3 innings, and the Arizona Diamondbacks beat the Philadelphia Phillies 2-0 on Wednesday night.

Kelly (7-6) struck out five before departing when Bryce Harper entered the game as a pinch-hitter. Andrew Chafin retired Harper on two pitches and Greg Holland finished the three-hitter, earning his 10th save in 11 tries.

Despite the bumps and bruises after four players, two on each side got hit by pitches both teams played it cool afterward.

Cole Hamels was sharp all afternoon striking out nine in seven scoreless innings, singled twice and drove in two runs to lead the Chicago Cubs past the Colorado Rockies 10-1 in a testy game on Wednesday.

Betts drew a bases-loaded walk from reliever Jesse Chavez in the ninth, giving the Red Sox a 4-3 win over the Texas Rangers on Wednesday and halting Boston’s three-game skid.

Rookie Nick Senzel and Joey Votto hit back-to-back home runs to open the game before Senzel and Jose Peraza walked away unhurt following a violent collision in the outfield as the Reds beat the Cleveland Indians 7-2 on Wednesday.

Ramon Laureano helped the Oakland Athletics end a long stay away from home in grand fashion.

Laureano hit his first career grand slam to break an eighth-inning tie and finished with five RBI and the Athletics beat the Tampa Bay Rays 6-2 on Wednesday.

Los Angeles Dodgers shortstop Corey Seager is likely to be sidelined for up to six weeks after injuring his hamstring in Tuesday’s night game against the Los Angeles Angels.

The Cleveland Indians righthander Trevor Bauer‘s future in Cleveland is uncertain. Its possible that he could sent to the Minnesota Twins.

The Tigers are the most intriguing sellers in baseball right now. They are looking at offers for starter Matthew Boyd, closer Shane Greene and right fielder Nicholas Castellanos, among others.

Michael Shapiro from Sports Illustrated writes the No. 3 prospect in baseball in 2016 per MLB Pipeline, Lucas Giolito made just seven starts in 2017, then allowed the most earned runs and most walks in all of baseball in 2018.

A 6.13 ERA in 32 starts didn’t bury Giolito in the White Sox rotation, but he entered this season desperate for a turnaround. He’s more than delivered in 2019.

Other suspects also were being pursued in the shooting, which witnesses said was carried out by two men on a motorcycle and two other groups of people in cars.

Nunez, who is friends with Ortiz and shares an agent with the former Red Sox star, told ESPN’s Marly Rivera that he spoke with Ortiz on the phone Tuesday, less than two days after the shooting at a club in Santo Domingo.

May 17th, 2019 Welcome Back! What’s New: Brooks Koepka had a record-setting start to his title defense in the PGA Championship. Koepka shot a 7-under 63 to break the course record and become the first player to shoot 63 in the same major twice. From the time the New Orleans Pelicans won the NBA Draft […]

MLB Trade Deadline Has Come And Gone What Was The Fall Out, News, Notes, Results

Sports That Matters August 1, 2019 Welcome back! The Yankees will head into the final months of the season with what they have, faltering pitchers, injured starters and all. After Masahiro Tanaka failed to hold a two-run lead in a 7-5, rain-interrupted win over Arizona on Wednesday in what became Zack Greinke’s final start for the Diamondbacks, […]