Check out the “My Take” page for the latest contest on the world of sports.

1. How can David Ortiz get shot in the Dominican Republic? 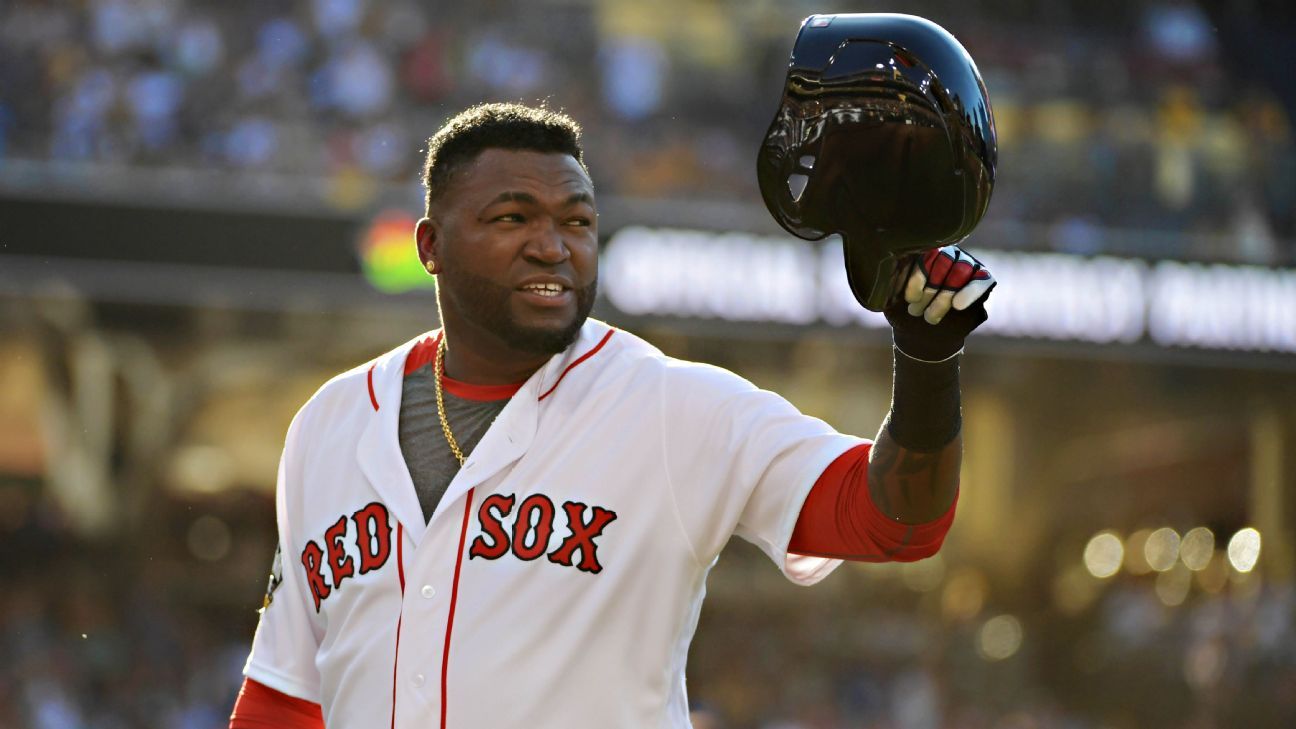 Doctors removed David Ortiz’s gallbladder and part of his intestine after the beloved former Boston Red Sox slugger known as Big Papi was ambushed by a gunman at a bar in his native Dominican Republic.

The Boston Red Sox sent a plane to the Dominican Republic on Monday to transport David Ortiz to Boston. Doctors have approved Ortiz’s transfer for further treatment once the plane is ready, Dr. Abel Gonzalez told ESPN.

The Pelicans’ top brass loved basically everything they’ve learned about Zion Williamson on background, & raved about meeting with him & family in Chicago.

Did Nike release a Kevin Durant shirt hinting at where the Golden State Warriors star small forward is going to play next season? Looks like back with the Warriors.

Four-time NBA champion Tony Parker’s impressive career is over. Parker announced Monday he’s retiring from basketball after 18 seasons in the NBA. The 37-year-old guard said on Twitter it was an emotional decision.

The Celtics have reportedly made inquiries into the availability of Houston Rockets center Clint Capela, according to Steve Kyler of Basketball Insiders.

In Game One of the NBA Finals the Raptors hit 13 threes, McDonalds gave away a record 80,000 free orders to Toronto fans.

MLB and the NBA are chasing their cut of the sports betting revenue pie, hoping to leverage their data to cash in on deals outside of just purely marketing spends from companies like FanDuel.

YES Network could soon include YES Radio. The new push is part of the expansion of the Network on the back of the re-acquisition by the Yankees and the new support of Sinclair and Amazon.

$67,505 is the top price paid for a pair of courtside seats in Toronto Monday night on StubHub, including fees, in US dollars.

The Golden State Warriors have hit on a number of recent business ventures, its jersey sponsorship agreement with Japanese e-commerce giant Rakuten have become synonymous with winning.

It’s been a year since the Supreme Court struck down the federal ban on sports betting, allowing states to legalize it if they wish. Twenty eight percent of the US has now legalized sports gambling.

Chinese conglomerate Wanda Group has filed for a US initial public offering of its sports unit. The Wanda Sports Group holdings include the Infront agency and World Triathlon Corporation, owner of the Ironman brand.

The English Football Association (FA) signed a five-year deal with telecoms firm BT to become the exclusive lead partner for all England soccer teams and its Wembley Stadium home.

Nike and Virgil Abloh teamed up to create the new NikeLab Chicago Re-Creation Center. The space is meant to celebrate the idea of re-creation through sustainability and experiences–two of the biggest trends in retail today.

South Carolina’s athletics department will have a budget of $125,411,845 and expenses of only $113,010,805. If the Gamecocks were to stay true to their spending this fiscal year, the department would be one of only a handful in the country that turn a profit.

Here are the schools that make the most revenue off of college sports, with additional data collected by USA Today.

There is a myth that collegiate athletics programs are cash cows for major universities, that’s just not the case.

Whenever the national conversation shifts to further compensating student-athletes or the fiscal health of college sports at large, a familiar talking point gets trotted out. Here’s an example, from a New York Times post by a former college athlete.

5. The WNBA popularity is growing in a world of women’s athletics trying to find an identity…

The Aces-Mercury WNBA game drew 14,090 fans which was more than the Marlins and the Rays have averaged so far this season.

The Connecticut Sun was the first team to break the original
model of the WNBA when it moved from Orlando in 2003. They are not
owned by an NBA franchise, and they don’t play in an NBA city.

WNBA players have exercised their right to terminate their collective bargaining agreement after the 2019 season, cutting the deal short by two years.

6. Soccer is having its 15 minute of fame on the national stage…

Find the latest from the 2019 Women’s World Cup right (HERE).

While the U.S. women’s national team is just hours away from playing Thailand in its first Women’s World Cup game, the most talked about player might not even be on the team.

The tournament will air in the United States English on Fox and FS1, while the Spanish broadcast rights are with Telemundo, with games also airing on Universo. You can watch the tournament on fuboTV (Try for free).

Brazilian soccer star Neymar’s agents said on Friday that he and some of his sponsors had agreed to suspend some advertising campaigns following an allegation that he raped a woman in Paris last month.

Sixty-four teams opened the 2019 NCAA Division I Baseball Tournament, and only nine remain.

Oregon State, last year’s national champion, was among the 32 teams eliminated in the regionals last weekend.

This past weekend six of the eight College World Series spots were finalized during the super regionals.

Auburn used a 13-run first inning to blow out North Carolina to solidify the seventh spot in the CWS.

Vanderbilt’s Kumar Rocker threw maybe the best pitched game in college baseball history. The freshman right-hander saved his team’s season with a 19-strikeout no-hitter against Duke. It was the first no-hitter in super regionals history. Rocker and Vanderbilt won Game 2 on Saturday night, then finished the series comeback with a Game 3 win Sunday.

UCLA, the top-ranked team in the nation, was upset by Michigan in Game 3. This is Michigan’s first trip to the College World Series since 1984.

The Bruins are the seventh No. 1 seed to fail to reach the College World Series since the national seeding format was put in place in 1999.

Florida State’s Mike Martin, the winningest head coach in Division I history, has a chance to go out with a championship. The 75-year-old Martin announced last June that he will retire following the 2019 season.

The Seminoles swept LSU in Baton Rouge in their super regional matchup over the weekend.

Martin has coached Florida State since 1979 and this will be his 17th trip to the College World Series.

Hard to believe Martin has not won a national championship!

The best of the rest…

Team USA won the World League Super Finals and will compete in the 2020 Olympics in women’s water polo.

Brooks Koepka and Dustin Johnson are both listed at 8/1 according to the Westgate Las Vegas SuperBook, putting them atop the wager board for Pebble Beach.

Tyreek Hill’s three-year-old son broken arm happened accidentally. Some will believe that this development marks the end of Hill’s potential troubles with the league. It does not.

James “Buddy” McGirt struggled repeatedly with his emotions on a sun-splashed afternoon, at times barely managing to keep it together as he was inducted into the International Boxing Hall of Fame on Sunday.

After being an alternate at both London and Rio, French BMX world champion Sylvain André is ready to finally make his Olympic debut at Tokyo 2020.

Sports That Matters July 24th, 2019 Welcome back folks, glad you stopped by! Los Angeles Clippers president of basketball operations Lawrence Frank says acquiring Kawhi Leonard and Paul George is a “landmark moment” for the franchise. With Leonard and George on the roster, the Clippers are title contenders for the first time in franchise history. Paul George and Kawhi Leonard […]

With Florida State’s 10-1 win over Miami Saturday, FSU baseball coach Mike Martin has tied the late Augie Garrido with 1,975 career wins, the most in college baseball history. Martin reached the mark in 248 fewer games than it took Garrido and has a career winning percentage of .735 to Garrido’s .673. By Curt Weiler, Tallahassee Democrat […]

PGA DRAWS INTEREST WITH TIGER IN THE HUNT

Tiger Woods Sunday Birdies at the Honda New York Yankees have been looking for rotation depth all off season. Aaron Boone was asked about the chances of pitchers like Alex Cobb or Lance Lynn joining the rotation. “At this point I don’t see those guys as realistic options … it’s my understanding that those guys aren’t […]