Welcome back hope your holiday was wonderful. Now back to the grind!

The Boston Bruins took the opening game of the 2019 Stanley Cup Final, defeating the St. Louis Blues 4-2 on Monday at TD Garden in Boston.

Everyone wondered how long it would take for the Boston Bruins to shake off the rust after 10 days of not playing prior to Game 1 of the Stanley Cup Final.

Sean Kuraly scored the go-ahead goal for the Bruins in the third period, pouncing on a rebound from a shot by Zdeno Chara.

The Bruins scored twice in the second period while out-shooting the Blues 18-3.

Brad Marchand tacked on an empty-netter with 1:49 left in the game to seal the victory.

Tuukka Rask, who had averaged 1.84 goals against through 17 postseason games, stymied the Blues attack and made 18 saves between the pipes for his eighth consecutive victory in the Stanley Cup Playoffs.

The Bruins fell behind early but were able to flip the switch down 2-0 in the second, however, Boston took complete control of the proceedings in a thoroughly dominant final two frames and racked up four unanswered goals to secure Game 1.

Big hits from both teams. Torey Krug skated the length of the ice and demolished Blues winger Robert Thomas. He did this without a helmet. But that didn’t deter Krug from providing the biggest hit of the NHL playoffs.

Jordan Binnington was solid for St. Louis, making 34 stops in the loss.

2. National Basketball Association gearing up for epic finals between the Golden State Warriors and the Toronto Raptors. 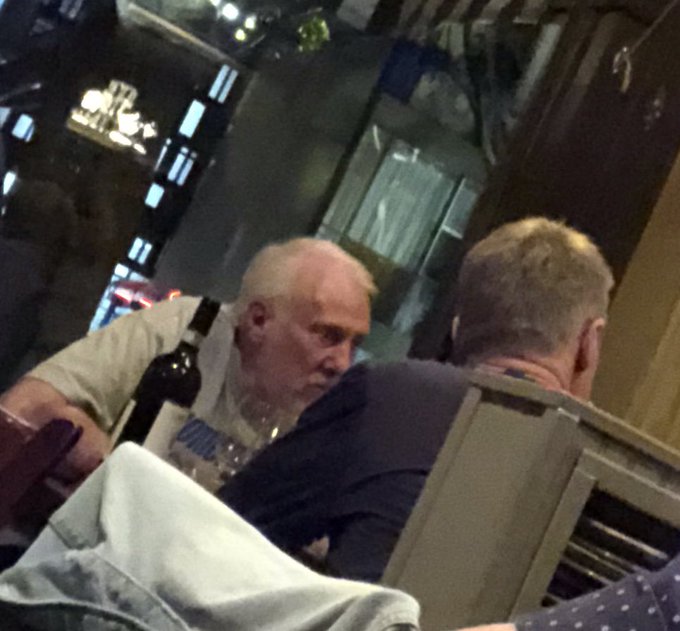 It may be just friends having wine with dinner or Steve Kerr is out with Gregg Popovich showing the Warrior head coach how to stop Kwahi Leonard! Leonard is currently averaging 31.2 points per game in these playoffs as he has lead the Toronto Raptors to their first ever NBA Finals appearance.

The Toronto Raptors headed to their first NBA finals, ticket prices are topping out at thousands of dollars. Mark McAllister looks at just how much it might cost you to get into the Scotiabank Arena.

The Golden State Warriors face a new NBA Finals opponent for the first time during this dynastic run.

The Warriors are eyeing its fourth title in five years!

The Warriors, who are 5-0 in the playoffs without Kevin Durant, likely will be without the injured superstar in Game 1.

The Raptors are a 1-point home favorite, with the over-under for total points scored set at 215.

The Raptors are 5-2-1 against the spread in their last four meetings, and come in on a sizzling four-game cover streak.

In their 16 playoff games so far, the Warriors have scored 116.4 points per 100 possessions 8.0 points above the NBA average. This is still the best offense in basketball.

Bart Starr died Sunday at age 85 in Birmingham, Alabama. Starr had been in failing health since suffering two strokes and a heart attack in 2014.

Bart Starr was an ordinary quarterback until teaming with Vince Lombardi on the powerhouse Green Bay Packers teams that ruled the 1960s and ushered in the NFL as America’s most popular sport.

“Bart Starr was one of the most genuine, sincere people I knew,” NFL Commissioner Roger Godell said in a statement. “He personified the values of our league as a football player, a family man, and a tireless philanthropist who cared deeply about helping at-risk kids. Above all, he was a wonderful human being who will be remembered for his kindness and compassion.”

After losing the 1960 NFL title game in his first playoff appearance, the Packers never lost another playoff game under Starr, going 9-0, including wins over the Kansas City Chiefs and Oakland Raiders in the first two Super Bowls.

When Starr retired following the 1971 season, his career completion rate of 57.4 percent was tops in the run-heavy NFL, and his passer rating of 80.5 was second-best ever, behind only Otto Graham.

After five world championships, he his all-time high salary of $100,000. That was Dan Devine’s first season as the Packers coach and Starr’s last as a player.

4. Bill Buckner passes away at age 69. Buckner’s career was one of grit and full of pain, physical and mental pain.

Bill Buckner, who made one of the biggest blunders in baseball history when he let Mookie Wilson’s trickler roll through his legs in the 1986 World Series. That little grounder forever changed his legacy.

Buckner died after a long battle with Lewy body dementia, his family said in a statement. The disease causes Alzheimer’s-like symptoms along with movement and other problems.

Buckner lived in Boise, Idaho, after he finished playing. He was the hitting coach for the Chicago Cubs’ minor league affiliate in Boise in 2012-13 and owned three car dealerships and several commercial properties in Idaho.

Buckner made his major league debut as a teenager, played until he was 40 and amassed 2,715 hits in between.

Hall of Fame manager Tom Lasorda of the Dodgers called Buckner “one of the best competitors I have ever seen.”

I Know You Want More!

Cavaliers owner Dan Gilbert remains hospitalized and is “resting comfortably” after suffering a stroke. The 57-year-old was taken to a Detroit-area hospital Sunday by a friend after not feeling well, and he had the stroke while getting medical care.

Serena Williams overcame a slow start for a 2-6, 6-1, 6-0 win over 83rd-ranked Vitalia Diatchenko of Russia in her opener at the French Open.

The owner of Santa Anita is investigating whether new rules were followed before the 26th horse death at the Southern California racetrack. Kochees, a 9-year-old gelding, was euthanized Sunday after injuring his left front leg in a race a day earlier.

Sportswear giant Nike will waive performance-based targets for 12 months for any of their pregnant athletes after several runners revealed they had their payments frozen.

Game 1 of the NBA Finals is still days away, but Drake is already getting much of the headlines. Smash mouth is trying to change that right now. The California based rock band took to Twitter over the weekend and sent a stern warning to Drake for him to not repeat his antics during the NBA Finals as he did during the Eastern Conference Finals.

Should The Washington Nationals Keep Stephen Strasburg or Anthony Rendon?

Sports That Matters Powered By  INTERTOPS Sign-Up | Make a Deposit | Get Bonuses December 6, 2019 Which player should the Washington Nationals keep Stephen Strasburg or Anthony Rendon? Nationals owner Mark Lerner commented on his two top free agent World Series players. “We really can only afford to have one of those two guys,” […]

Sports That Matters Powered By  INTERTOPS Sign-Up | Make a Deposit | Get Bonuses October 20, 2019 And in an eyeblink, it was gone, all of it: the hard-to-believe comeback, half an inch from the brink of extinction; the dream season stuffed with 108 victories of all make and model, all variance and variety; a […]

Are The Astros In Trouble Down 2-0 To The Nationals

Sports That Matters Powered By  INTERTOPS Sign-Up | Make a Deposit | Get Bonuses October 24, 2019 After stealing Game 1 of the World Series, the Washington Nationals came back and won Game 2 in convincing fashion with a 12-3 victory over the Houston Astros. Houston has a serious problem. A night after Gerrit Cole threw an unexpected disaster to […]