Budenholzer said, “He twisted his ankle in the backcourt. He just looked like he was in a lot of pain and couldn’t move.”

The No. 2 seed Toronto Raptors beat the No. 1 Milwaukee Bucks 105-99 in Game 5 of the Eastern Conference Final.

They’re also on the brink of their first NBA Finals appearance.

Fred VanVleet posted a plus-28 and added 21 points on seven three-pointers, including one with 2:19 remaining to give the Raps a 96-93 edge.

Giannis Antetokounmpo had 24 points, six rebounds and six assists for the host Bucks.

2. The NFL Draft in Nashville outperformed even our lofty expectations and set the bar for future NFL events. 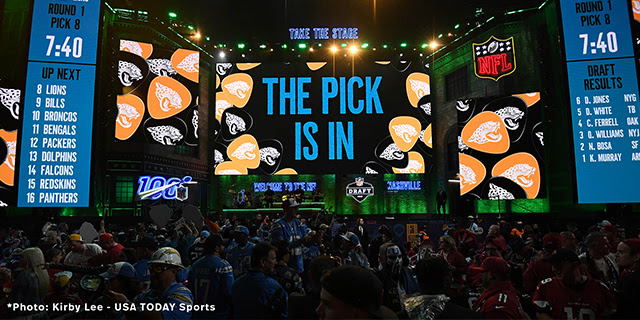 Nashville had record spending, record attendance over 600,000 attendees, record viewership and a record number of credentialed media the biggest and best NFL Draft ever.

The NFL Draft generated a record $133 million in direct spending and $224 million in economic impact.

The NFL Draft was broadcast around the world in a record 115 countries.

The three-day event drew a record crowd of 600,000 and a record 47.5 million in television viewership.

Titans controlling owner Amy Adams Strunk said. “By any measure, it was the NFL’s most successful draft in their history and I am so proud that our organization played a role in that achievement.

The event generated $10.6 million in taxes and fees for Davidson County.

97% of attendees said they were likely to recommend the event.

54 percent of attendees surveyed were visitors, and 46 percent were local.

Average visitor party size was 3.2 people with an average length of stay of 2.8 nights.

16 percent of parties brought children to the event.

75 percent of visitors attended multiple days of the NFL Draft, compared with 50 percent of locals.

21% of visitors surveyed stayed at Airbnb and VRBO rentals, 51.1% stayed in hotels, 16.6% with friends/family and 11.3% had other accommodations or took a day trip.

3.  Really, a team is being kicked out of a league for being to good!

Officials at Division III powerhouse the University of St. Thomas said they feel after the school was “involuntarily” removed from the Minnesota Intercollegiate Athletic Conference (MIAC) on Wednesday because of its “competitive” advantages.

St. Thomas has been the conference’s dominant football program in recent years and that’s rubbed fellow conference members the wrong way enough that a push to get rid of St. Thomas had started.

Under coach Glenn Caruso, St. Thomas has won six MIAC football titles since 2010. The Tommies also reached the national title game in 2012 and 2015.

St. Thomas has won 118 games in coach Glenn Caruso’s 11-year tenure, many of them by absurd margins.

The Learfield Directors’ Cup is a measurement of an athletic program’s overall success.

St. Thomas was told the league would be disbanded if the school remained a member.

“After extensive membership discussions, the University of St. Thomas will be involuntarily removed from membership in the Minnesota Intercollegiate Athletic Conference,” the league said in a statement. “The MIAC Presidents’ Council cites athletic competitive parity in the conference as a primary concern.

They stated that St. Thomas has not violated any MIAC or NCAA rules and leaves the conference in good standing.

Any vote to get rid of St. Thomas needed support from nine of the 13 schools in the conference.

Supporters of St. Thomas, publicly and privately have said they believe they’re being punished for winning at a high level.

The school spends $1.1 million on football each year, per U.S. Department of Education data, and its 6,000-plus enrollment trumps the enrollment of the other programs in the private-school league.

4. 2018 MLB Draft pick stubbed the Braves, went to junior college and now has a contract for $7 million, but it isn’t in the USA.

Carter Stewart is in agreement on a six-year contract worth more than $7 million with the Fukuoka SoftBank Hawks of Japan’s Pacific League.

The Fukuoka SoftBank Hawks, who have won four of the past five Japan Series

Stewart, 19, could potentially return to the United States as a 25-year-old free agent, and he would be allowed to sign a long-term contract with any of MLB’s 30 teams.

Stewart, who is represented by Scott Boras.

Stewart was the No. 8 overall pick in last year’s MLB draft but didn’t sign after the Atlanta Braves, who believed he was injured.

Stewart rejected Atlanta’s below-slot signing bonus of around $2 million, the offer was well under the $4.98 million slot value of the pick.

Stewart enrolled at Eastern Florida State College, which made him eligible for this year’s draft. He is currently ranked No. 59 among draft prospects by MLB Pipeline.

The NFL Combine is staying in Indianapolis until at least 2021. In a deal that was announced yesterday, the city and the NFL agreed to terms that include annual reviews of the event after these next two years.

Juwan Howard is coming back to Michigan. The former member of the Fab Five agreed to a five-year deal, which will pay him $2 million in his first year.

Stadium deals in the Premier League would be worth $180 million per year across all the clubs.

NASCAR has committed to acquire International Speedway Corp for $2 billion, in a transaction that will see the company take over the 12 tracks owned by ISC, all of which already host NASCAR races.

Paris Saint-Germain president Nasser Al-Khelaifi is under investigation for corruption related to Qatar’s bids to host the 2017 and 2019 track world championships.

In 1999, Ted Leonsis acquired the Washington Capitals for $85 million. In 2016, Leonsis co-founded aXiomatic, his esports and gaming-focused investment group that now holds majority ownership in Team Liquid, which Leonsis says was worth more than the Capitals when he bought them.

A woman will stand trial on allegations she beat her mother and shaved her head because she thought the older woman was listening to the Pittsburgh Steelers’ game too loudly on the radio.

The death of Owen Hart at WWF/WWE Over The Edgeon May 23, 1999. It has been 20 years since he fell from high above the ring and hit the ropes, which led to his death.

March 14, 2020 The Arizona Diamondbacks have been a competitive team over the last three seasons, but they missed the playoffs in 2018 (82-80) and 2019 (85-77). In the team’s 22-year history, Arizona has one World Series title and six trips to the postseason. After adding starter Madison Bumgarner along with outfielders Starling Marté and Kole […]