1. Can the City of Seattle get the renovation of KeyArena done in time for thier new NHL hockey team, WNBA team and possible NBA team?!

KeyArena’s grand reopening has been delayed yet again, threatening the start of the Seattle Storm’s 2021 basketball season.

A recently-renewed lease agreement between the City and the Storm calls for the City to assume the cost of relocation due to redevelopment, up to $260,000 per game.

The first price tag originally had renovations coming in around $600 million.

That was initially delayed 12 months by the NHL, when it became clear that it wasn’t a feasible date for the end of construction. After that, eyes were trained on the 2021 season for the debut of Seattle’s new hockey team.

One fact was made clear, that the ever-inflating costs will not fall to Seattle’s taxpayers.

On the hook instead would be the developers and private investors involved in the renovation project.

The original KeyArena in 1962 was build on level ground.

The newest renovation will have the arena’s back-of-house area sitting a full 53 feet below ground level, with significantly expanded floor space to boot.

The rebuild is set to include a 360-foot-long glass atrium, dedicated locker rooms for Seattle’s new NHL team, a potential NBA team, and the WNBA Storm, 50,000 square feet of storage, and a 750,000 square foot interior.

Capacity for hockey games will seat up around 17,400 people, while basketball will house 18,600.

The proposed would take the decision on whether to review in the final two minutes of each half out of the hands of officials.

Reviews in the final two minutes would instead require a coach’s challenge.

A final decision on the change will come after the committee discusses the subject with the league’s coaches next month.

Owners voted in March to allow interference calls or non-calls to be challenged by coaches and reviewed via replay as a one-year experiment.

A proposed rule change requiring each team to have one possession in overtime was tabled for lack of support.

The competition committee may also exempt Hail Mary passes so they’re not reviewable. That change would require coming up with a formal definition of a Hail Mary. “We really don’t want our games to end on a review,” said Atlanta Falcons president and CEO Rich McKay, a member of the committee.

Owners voted to hold the NFL draft in Cleveland in 2021, the 75th anniversary of the Browns, and in Kansas City in 2023. The league said it delayed choosing a site for 2022 because about 20 cities are interested in hosting that year.

“It’s a big, big deal for our area, one of the founding areas of the NFL,” Browns owner Jimmy Haslam said. 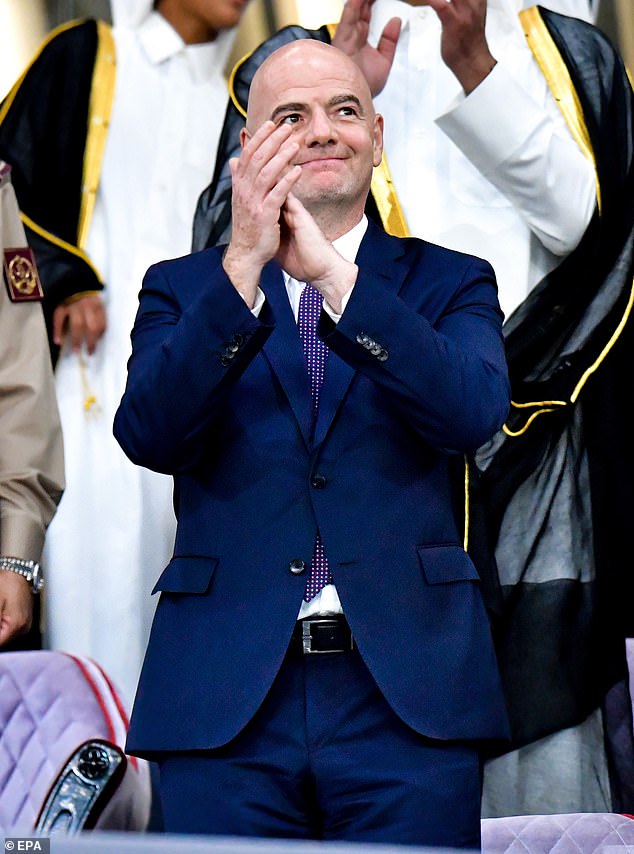 FIFA scrapped plans to expand the 2022 Qatar World Cup to 48 nations, deciding Wednesday to stick with 32 countries due to the political and logistical complexities of using another Persian Gulf nation.

They have been exploring the possibility of using one more host nation, but logistical and political complexities proved too much to overcome.

That means the World Cup will not be expanded until 2026, with FIFA already having approved a format with 48 teams for that tournament in the United States, Canada and Mexico.

A FIFA internal report in March concluded that the United Arab Emirates, Bahrain and Saudi Arabia cannot join as co-hosts unless they restore the economic and travel ties with Qatar that were severed two years ago.

The regional diplomatic crisis left neutral Kuwait and Oman as the viable options. Oman has said it isn’t keen on hosting games at the FIFA showpiece.

In Kuwait, Jaber Al-Ahmad International Stadium has 60,000 seats and the capacity at Sabah Al-Salem Stadium is only 26,000. Both venues would require upgrades to be used at the World Cup, putting the spotlight on working conditions and labor rights.

FIFA has already had to adapt to cope with taking its showpiece tournament to the Middle East for the first time. While Qatar won a vote in 2010 on the basis of staging a June-July World Cup, FIFA shifted the tournament to from its usual slot because of the fierce summer heat to Nov. 21-Dec 18, 2022.

4. Could Twitch have another competitor in the U.S.? Huya, a Chinese live streaming platform focused on gaming, is looking to enter the market. (Photo: Seeking Alpha)

Huya, a Chinese live streaming platform focused on gaming, is looking to expand into the U.S. in the next couple of years.

Huya is growing quickly and is now focusing on launching internationally first in Latin America and other parts of Asia.

The company is also investing in its own e-sports teams, something that experts say could open new revenue streams.

NYSE-listed Huya streams some of those tournaments and hosts other user-generated content.

It makes money mainly by selling virtual gifts to users who then send those to streamers on the platform, a model that helped the firm see 93.4% year-on-year revenue growth for the first quarter, when it reported earnings last week.

It has a product called Nimo TV which it has launched in some markets in Latin America and Asia.

Rongjie Dong, CEO of Huya. “We are longing for the U.S. market. We know in the U.S., users have high value and there is a large pool of users.”

Sports That Matters Powered By  INTERTOPS Sign-Up | Make a Deposit | Get Bonuses September 8, 2019 Jared Goff threw for 186 yards and a touchdown, Malcolm Brown ran for a pair of scores, and the defending NFC champion Los Angeles Rams spoiled Cam Newton’s return with a 30-27 win over the Carolina Panthers on Sunday. Todd Gurley started and ran for 97 […]

Sports That Matters Powered By  INTERTOPS Sign-Up | Make a Deposit | Get Bonuses October 14, 2019 It looks like Jason Garrett’s time as Dallas Cowboys HC is running out. Jerry Jones gave his latest public endorsement of Jason Garrett earlier this week when he said it would be a losing proposition to bet on the head […]

Sports That Matters Powered By  INTERTOPS Sign-Up | Make a Deposit | Get Bonuses September 3, 2019 Esports is more lucrative than ever, with players earning more in a single tournament than some of the most successful sports athletes earn in the most profitable sporting events. Tournament prize money is directly reflecting the exponential growth and […]