John Havlicek’s legacy was built over 16 years with the Boston Celtics, eight of them as NBA champions, making him among the best to ever play the game. He passed away at the age of 79. The cause of death wasn’t immediately available. The Boston Globe said he had Parkinson’s disease. 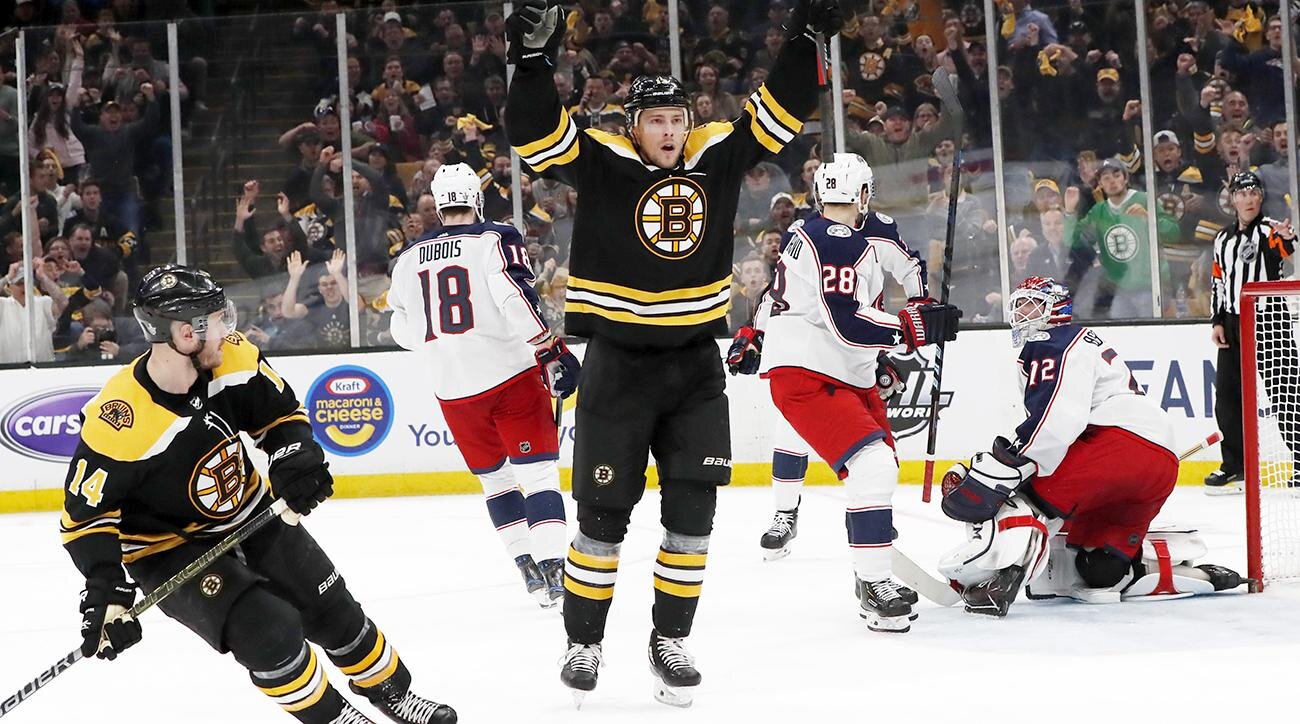 Charlie Coyle tied it in the final five minutes of regulation and scored again with 5:15 gone in overtime on Thursday night to lead the Boston Bruins to a 3-2 victory over the Columbus Blue Jackets in Game 1 of their Eastern Conference semifinal series. (Read) by Jimmy Golen

Zack Greinke seven shutout innings against the Pittsburgh Pirates helped the Arizona Diamondbacks in a 5-0 win at PNC Park, completing a four-game road sweep, Greinke also made some baseball history with his fifth-inning triple off Bucs starter Jameson Taillon. It’s the first time since 1930 that a pitcher has hit at least five extra-base hits through the team’s first 26 games (Wes Farrell). The only pitcher with more than five since 1908? Just the greatest dual threat in baseball history: Babe Ruth (8, in 1918).

Clint Frazier became the Yankees’ 15th player to go on the injured list, sidelined because of a sprained left ankle, and New York Yankees acquired Cameron Maybin from the Cleveland Indians for $25,000 to gain outfield depth.

Miguel Cabrera, the 36-year-old reached the 2,700-hit milestone against the Red Sox, inching closer to the illustrious 3,000 club. Only 32 players have achieved that feat.

Vladimir Guerrero Jr. is set to make his big league debut with the Toronto Blue Jays against the Oakland Athletics.

Rick Porcello earned his first win and quality start of 2019, leading the Red Sox to a 7-3 victory over the Tigers. Over six innings, Porcello scattered six hits and three runs while walking two and striking out five.

Trevor Bauer and Gerrit Cole, former UCLA teammates, both of whom brought their “A” games. But it was Bauer who prevailed, helping lift the Cleveland Indians to a 2-1 victory over the Houston Astros.

Former batterymates as Miami Marlins, Caleb Smith faced J.T. Realmuto in an epic first-inning at-bat during the Marlins’ 3-1, 10-inning victory at Citizens Bank Park on Thursday. Smith ended up winning a 16-pitch battle by striking out Realmuto swinging, but not until after the All-Star catcher fouled off 10 consecutive full-count pitches.

Washington Nationals will promote middle infield prospect Carter Kieboom to the majors ahead of Friday’s game against the Padres. The Nationals are currently dealing with injuries to shortstop Trea Turner and third baseman Anthony Rendon, so the club hopes Kieboom can help the team tread water at the very least.

The Arizona Cardinals have selected quarterback Kyler Murray with the first pick in the 2019 draft.The Heisman Trophy winner, linked for months to the Cardinals, become the second straight Oklahoma quarterback to be taken first overall in the draft, joining Cleveland Browns quarterback Baker Mayfield.

The Washington Redskins stayed put at No. 15 and used the pick on former Ohio State quarterback Dwayne Haskins, who slipped out of the top 10 picks and became the third quarterback selected in the draft.

The New York Giants have their franchise quarterback of the future. Daniel Jones of Duke has been selected by the Giants with the sixth overall pick.

The Pittsburgh Steelers made a big move into the top 10 on Thursday night to get their inside linebacker of the future. The Steelers acquired the 10th pick from the Denver Broncos and chose Michigan linebacker Devin Bush. In exchange for the 10th selection, Denver received Pittsburgh’s 2019 first- and second-round picks (Nos. 20 and 52) and a 2020 third-round pick.

The Green Bay Packers used the first of their two first-round picks to bolster the defense with a pass-rusher with big upside. The club took linebacker Rashan Gary with the No. 12 overall pick Thursday night. The Packers weren’t done there, however, as they traded up to the No. 21 pick to select Maryland safety Darnell Savage. In the trade the Seattle Seahawks receive Green Bay’s second first (No. 30) and two fourth-round picks (No. 114 and No. 118).

The Jacksonville Jaguars chose Kentucky edge rusher Josh Allen with the seventh overall pick of the 2019 NFL Draft. Allen was highly regarded as one of the draft’s top pass rushers and was thought at one point to go as high as No. 3 to the New York Jets.

The Buffalo Bills selected Houston defensive tackle with the No. 9 overall pick in the 2019 NFL Draft on Thursday night. Enamored with Oliver, the team’s brass spent the day exploring the option of trading up for Oliver, NFL Network Insider Ian Rapoport reported while the Bills were on the clock

Montez Sweat’s wait has ended thanks to the Washington Redskins trading up with Indianapolis Colts to grab the Mississippi State pass rusher at No. 26.

The Detroit Lions used the No. 8 overall pick in the 2019 NFL Draft to upgrade an offense that could use a spark through the air. General Manager Bob Quinn hopes to have checked that box by landing highly touted tight end T.J. Hockenson out of Iowa.

Baltimore Ravens used the No. 25 overall pick on wideout Marquise “Hollywood” Brown, the first receiver selected in the 2019 NFL Draft on Thursday. The Ravens traded the No. 22 selection to the Philadelphia Eagles for the 25th pick, a fourth-rounder and sixth-rounder.

Former Arizona State wide receiver N’Keal Harry said Thursday that he didn’t see himself getting past the 33rd overall pick and it turns out he was right. The New England Patriots selected Harry with the 32nd overall pick Thursday night to close out the first round of the 2019 NFL Draft.

Alabama’s Josh Jacobs ended the drought at the running back position in the first round of the draft. The Oakland Raiders selected Jacobs with the 24th pick of the 2019 NFL Draft on Thursday night. Jacobs ranked as NFL Network draft analyst Daniel Jeremiah’s eighth-best draft prospect of the league’s annual selection process, easily topping the 2019 class of running backs.

The Seattle Seahawks needed help at defensive end even before trading Frank Clark to the Kansas City Chiefs earlier this week. With the 29th overall pick in the draft, the Seahawks grabbed TCU defensive end L.J. Collier to help boost their pass rush.

The Tennessee Titans used the No. 19 pick in the 2019 NFL Draft to pad their evolving defensive front with Jeffery Simmons. The Mississippi State tackle was widely viewed as zooming toward a potential top-10 selection were it not for the torn ACL he suffered during a January training session. It’s unclear if Simmons will be ready to play before 2020. Simmons was also found guilty of malicious mischief and pled no contest to simple assault for his role in a March 2016 fight, in which he was seen on video repeatedly punching a woman.

A television station aired audio Thursday it says shows Kansas City Chiefs wide receiver Tyreek Hill telling his fiancee about punching and using a belt to discipline their son one day after prosecutors reluctantly declined to file charges in a domestic incident.

The Philadelphia Eagles traded up to grab one of the top offensive lineman on the board. Philly acquired the 22nd pick from the Baltimore Ravens and drafted Washington State tackle Andre Dillard in the first round of the 2019 NFL Draft.

Why the Oakland Raiders draft picks should ask for deferred money in their rookie deals, and why in some cases slipping down the draft board might pay off. (Read) by Michael McCann and Robert Raiola

The first round of the 2019 NFL draft is in the books. As many expected, Kyler Murray and Nick Bosa went No. 1 and No. 2 overall, but then things got weird from there. How did your team’s pick(s) grade? (Read) by Andy Benoit

Day 2 of the draft, begins at 7 p.m. ET on Friday, here’s a look at the top draft prospects still available. (Read) by Gil Brandt

Sports That Matters Powered By  INTERTOPS Sign-Up | Make a Deposit | Get Bonuses September 8, 2019 In a 59-10 season-opening rout of the Miami Dolphins, Lamar Jackson produced the best passer rating (158.3) in Baltimore Ravens history and Marquise Brown became the first player in NFL history with multiple 40-yard touchdowns in his career […]

What Are The Brewers Without Christian Yelich?

Sports That Matters Powered By  INTERTOPS Sign-Up | Make a Deposit | Get Bonuses September 11, 2019 Just in case you’ve been living under a rock, Christian Yelich broke his knee cap when fouling a ball off in an at-bat against the Miami Marlins. The ball took an unfortunate and unlikely bounce off his bat […]