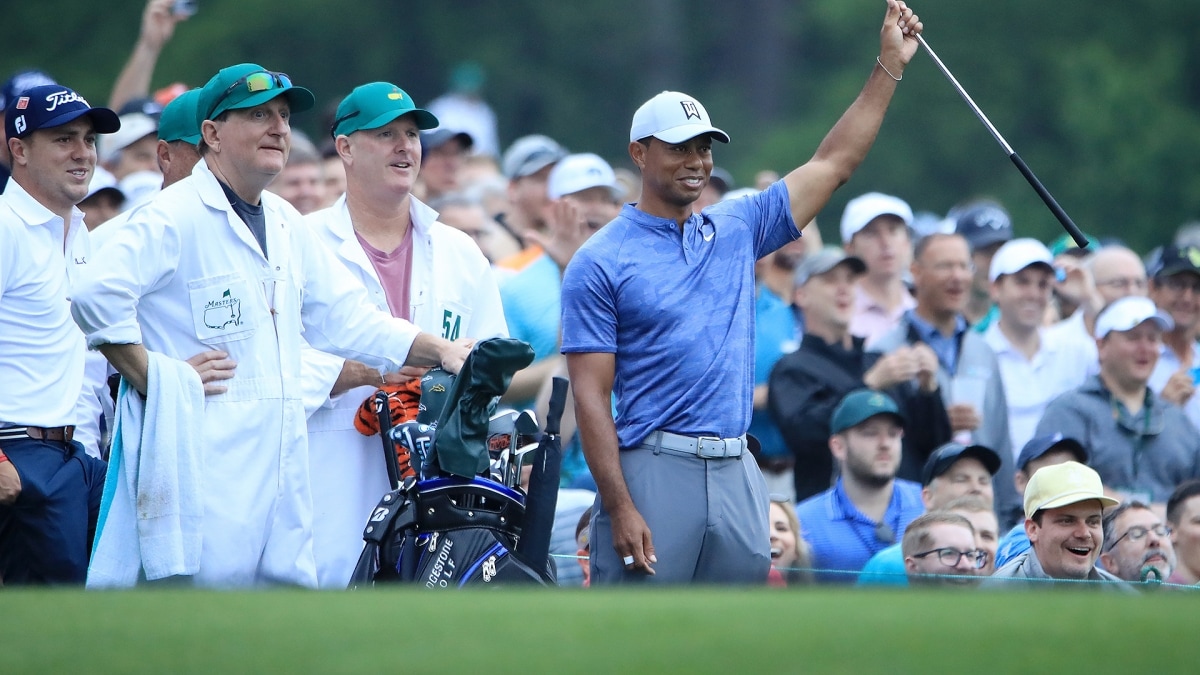 According to Darren Rovell of The Action Network, someone placed an $85,000 bet on ​Tiger Woods winning the Masters at a William Hill sportsbook in Nevada. The payout of such a wager? A cool $1.19 million.

Woods is making his 22nd career Masters appearance, having last won in 2005 and having tied for 32nd here a year ago. Jon Rahm, who finished alone in fourth place last year for his best career finish in a major, and Haotong Li, who finished third at The Open in 2017 and made the cut last year in his Masters debut.

Brandel Chamblee weighs in on Brooks Koepka’s recent weight loss and the impact it’s had on his game ahead of the year’s first major.

​​LeBron James has been the highest rated player in the popular video game series NBA 2K for many years now. The ​Lakers‘ star was removed from sole position of the highest overall rated player, and is now in a three-way tie with two other superstars. James’ rating has fallen from 98-overall down to 96, where he sits on par with MVP candidates James Harden and Giannis Antetokounmpo.

Magic Johnson stunned the basketball world when he announced his decision to step down as the Los Angeles Lakers president of basketball operations. Johnson revealed on Tuesday that he was stepping down after the Lakers’ disappointing 2018-19 season.

The ​Dallas Mavericks host the Phoenix Suns on Tuesday night in what could be ​Dirk Nowitzki‘s last career home game at the American Airlines Center. Dirk Nowitzki (40 years, 294 days) became the oldest player to score 30+ points in a game as he finished with 30 points (11-31 FG, 5-14 3pt FG) and 8 rebounds in the victory over the Suns.

​Dwyane Wade played in his last regular season home game at American Airlines Arena. Prior to tip-off against the Philadelphia 76ers, the court was adorned with the three NBA titles that Wade brought to the ​Miami Heat. Wade thanked everyone that played a factor in his 15-plus year NBA career, while also holding back tears. Wade dropped 30 points on the 76ers.

Literally the worst possible scenario that could have presented itself for the ​Golden State Warriors has reared it’s head. In a meaningless game against the New Orleans Pelicans, ​Steph Curry banged up his ankle and took off towards the locker room.

Winning a national title is sweet, but ​Virginia head coach ​Tony Bennett got a pretty great bonus to go along with it. Bennett received a hefty $5.4 million for his services this season.

It only took 100 days to get here. ​​UCLA‘s prolonged head coach search is now officially over. After getting spurned by several candidates, they’ve got their guy.​Cincinnati‘s Mick Cronin is heading to Los Angeles.

Chris Mullin is out as the head coach at St. John’s. The University is expected to target Arizona State head coach Bobby Hurley. Hurley is 47 and makes about $2.4 million, per USA Today. ASU may have to come up with an extension to keep him in Tempe.

Auburn point guard Jared Harper, who was instrumental in leading the Tigers to the Final Four and a ​bad break away from the title game, will forgo his senior season and declare for the NBA draft.

John Beilein‘s Michigan Wolverines were one of the deepest squads in the country this season. Beilein will need to find a way to replace a good chunk of that depth, however, as three starters are all declaring for the NBA draft. Guards Jordan Poole and Charles Matthews, as well as star freshman ​Ignas Brazdeikis, all announced that they will declare for the NBA draft.

​Kentucky​ point guard Ashton Hagans could have easily bolted for the professional ranks. He will suit up for his sophomore season, which is a huge boost in Kentucky’s quest to reclaim the SEC crown.

​Kentucky‘s PJ Washington is leaving Lexington and declaring for the NBA Draft. Washington is projected to be picked in the lottery perhaps in the top 10.

Bryce Harper is crushing the ​Washington Nationals. ​Harper treated the fans at Citizens Bank Park to an opposite field home run off of Stephen Strasburg on Tuesday evening. Harper’s fourth home run of the year gave Philadelphia an early 4-1 lead. Bryce Harper is hitting .355/.524/.839 for the Phillies.

After going 2-for-2 with two singles, Angels superstar Mike Trout exited Tuesday’s game against the Brewers with a right groin strain in the top of the fourth inning.

According to MLB Stats, the​ New York Mets ace Jacob deGrom has allowed one earned run or fewer in 51.1% of his starts, which is the highest percentage for a pitcher in his first 141 career games since 1969.

​An awkward swing saw ​Giancarlo Stanton suffer a bicep injury which landed him on the IL, the ​New York Yankees saw a good chunk of power siphoned out of their lineup. Luckily for the Bronx Bombers, their star slugger is nearing a return to action.

Joey Votto Cincinnati Reds’ veteran first baseman in Tuesday’s 14-0 win over the Marlins, just two days after the Reds were involved in an on-field scuffle with the Pittsburgh Pirates, Votto was drilled in the back by an offering from Wei-Yin Chen. What’d he do? Well, he took a step or two toward Chen on the mound playfully before picking up the baseball and tossing it back to the left-hander on his way to first base.

Jarrod Dyson’s two-run homer off Jose Leclerc in the bottom of the ninth inning led the D-backs to a 5-4 walk-off win over the Texas Rangers on Tuesday night at Chase Field. The D-backs trailed, 4-2, heading into the ninth, when Christian Walker led off the frame with a single and scored when Eduardo Escobar doubled to right-center field.

The NFL on Tuesday announced the 2019 preseason schedule. Preseason action kicks off with the nationally televised Hall of Fame Game between the Denver Broncos and Atlanta Falcons on Aug. 1, in Canton, Ohio. Other prime-time preseason games of note have the New Orleans Saints making a third consecutive summer trip to Southern California to play the Los Angeles Chargers in Week 2 and a battle of Florida between the Jacksonville Jaguars and Miami Dolphins in Week 3.

Dallas Cowboys owner Jerry Jones was in Minneapolis attending meetings between the league’s Management Council and the NFL Players Association discussing the future Collective Bargaining Agreement. The current CBA was signed in 2011 and is set to expire after the 2020 season. Just two more seasons until that expiration, sides are attempting to get a jump on negotiations and avoid a potential work stoppage.

After hitting free agency and waiting for a deal from New England, Stephen Gostkowski is staying to chase another ring. Gostkowski and the Patriots agreed to a two-year deal, solidifying one of the more volatile positions in the game yet again.

Reports that Danny Amendola and the New England Patriots had mutual interest in a reunion. It only took one day for Amendola to sign with the Lions for $4.5 million.

The Philadelphia Eagles brought aboard a trio of former Alliance of American Football players, and two come with notable accomplishments from the former league. The Eagles announced on Tuesday the signing of Charles Johnson, quarterback Luis Perez and wide receiver/returner Greg Ward to one-year deals.

The Detroit Lions have signed QB Tom Savage, he will back-up ​Matthew Stafford.

Josh Rosen was present for the start of the Arizona Cardinals offseason conditioning program under new head coach Kliff Kingsbury.

Oklahoma quarterback Kyler Murray is one of 23 top prospects who will attend the 2019 NFL Draft. Murray will be joined by fellow QB prospects Daniel Jones and Drew Lock.

The ​projected first-round quarterback ​Dwayne Haskins Haskins plans to watch the draft at a viewing party in Maryland not in Nashville, TN on April 25.

Michigan defensive lineman Rashan Gary is visiting the Cincinnati Bengals and will meet with the New York Giants later this week.

Prior to the start of the Stanley Cup playoffs, NHL fans awaited to see which teams had the chance to select ​Jack Hughes or ​Kaapo Kakko. The winners of the Draft Lottery were the New Jersey Devils, who have the first overall pick for the second time in three years.

The New York Rangers and Chicago Blackhawks each made a significant jump at the NHL Draft Lottery on Tuesday and will select No. 2 and No. 3 behind the New Jersey Devils at the 2019 NHL Draft.

The National Hockey League announced today that it will open the 2019 Stanley Cup Playoffs with a free concert headlined by GRAMMY Award-winning band Cage The Elephant at Curtis Hixon Park in downtown Tampa – nearby the home of the Presidents’ Trophy-winning Tampa Bay Lightning – on Wednesday, April 10. The 2019 Stanley Cup Playoffs Party featuring Cage The Elephant, which will not require a ticket.

Defenseman Slava Voynov has been suspended for the entire 2019-20 NHL season (including Playoffs) for unacceptable off-ice conduct. Voynov’s eligibility to play in the NHL will be restored (assuming good behavior) no later than July 1, 2020. The former LA King has not played in the NHL since October 2014, when he punched, kicked, and choked his wife, and pushed her head into a TV screen.

The San Jose Sharks loaded up in the off-season with a Stanley Cup run in mind, but getting through the Golden Knights, who made a major deadline acquisition to bolster their roster, will not be easy.

It looks like the Los Angeles Angels will be watching the playoffs from home. Unfortunately, so will Mike Trout one of the best in the game. The Boston Red Sox have agreed to a deal to bring in second baseman Ian Kinsler from the Angels. Kinsler, 36, remains a solid performer at his native second base. He has […]

Sports That Matters Powered By  INTERTOPS Sign-Up | Make a Deposit | Get Bonuses October 13, 2019 10 thoughts and takeaways from the Florida Gators 42-28 loss to LSU. (READ MORE) by  Nick de la Torre | Gator Country No. 6 LSU played its first “real” defense of the season Saturday night and shredded it […]