A year after introducing a humidor in which to store baseballs, the Diamondbacks made yet another potentially significant change to the way games will be played at Chase Field: They have replaced the park’s natural grass with a state-of-the-art artificial surface in a partnership with Shaw Sports Turf.

“Our baseball operations staff has completed extensive research, including site visits and player testing and we are all in agreement that this is the best decision for our franchise,” D-backs president and CEO Derrick Hall said. “The challenges with growing natural grass in our climate and stadium have been well documented and we have considered alternate solutions for many years. We decided to make this change because the technology developed by Shaw is the best in existence and will provide a consistent playing surface and benefits to our players on the field while enhancing our fan experience throughout the ballpark.”

The B1K Natural Turf is a dual fiber system comprised of Shaw’s high-performance Strenexe XD slit firm and Shaw’s Bolt mono filament. Shaw Sports Turf is the only company with years of research dedicated to collecting data specific to baseball resulting in the all-new B1K system. Playing on a surface tailored for baseball creates a more consistent ball bounce allowing players to react more naturally when fielding hits. A firmer and more accurate surface also minimizes fatigue and soreness providing less energy rebound and less leg stiffness.  We are honored and humbled to be trusted by DBacks organization to develop a turf system that plays true” said Philipe Aldahir, Director of Research for Shaw Sports Turf. 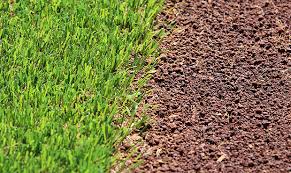 The B1K natural system features Geofill, an all-natural infill made from coconut husks and fibers. This natural alternative infill feels and plays like dirt with added cooling benefits and water savings. The team will reduce its water use by 90 percent, which equals nearly two million gallons.

Currently, the team leaves the roof to Chase Field open for much of the afternoon in order for the grass to get enough sun to grow. After it is closed, the stadium then uses an enormous amount of air conditioning to try and cool the facility down enough for fans to be comfortable that night.

The new turf is made from completely natural materials that are environmentally friendly and the roof will now be able to be closed during the day conserving the amount of electricity needed to cool the building.

What The Player’s Are Saying:

Nick Ahmed: “Just being on it for one day, I felt like it may have been a little slower (than grass),” shortstop Nick Ahmed said. “It was less bouncy than I expected it to be. Just playing on a bunch of other turf fields in the past, which have been very bouncy, it felt like the hops were fairly normalized compared to grass. It just felt a little slower.”

Jake Lamb: “The ball doesn’t come up as much as you’d expect. I’ve never played on that kind of turf. I grew up playing on turf — my college field is turf, any field in Seattle is turf — but that’s like that rubber turf or the AstroTurf. There’s not a big difference between (the new surface and) grass. … (If anything) it’s a tick slower.”

Infield coach Tony Perezchica: “spongy” feel when walking or running on it. He believes ground balls that hit near the mound or close to home plate can “slow down” and that line drives to the outfield tend to “grab” and kick up. He has been told that the more the surface is played on the “truer” it will play.”

Photo Getty Images The Bryce Harper sweepstakes is heating up even more. The Dodgers have re-entered the race to sign the free-agent outfielder, ESPN reported, citing multiple league sources. However, the Dodgers are offering only a short-term deal, per MLB.com, which is not what Harper reportedly wants. He’s still pushing for a long-term contract akin to what […]