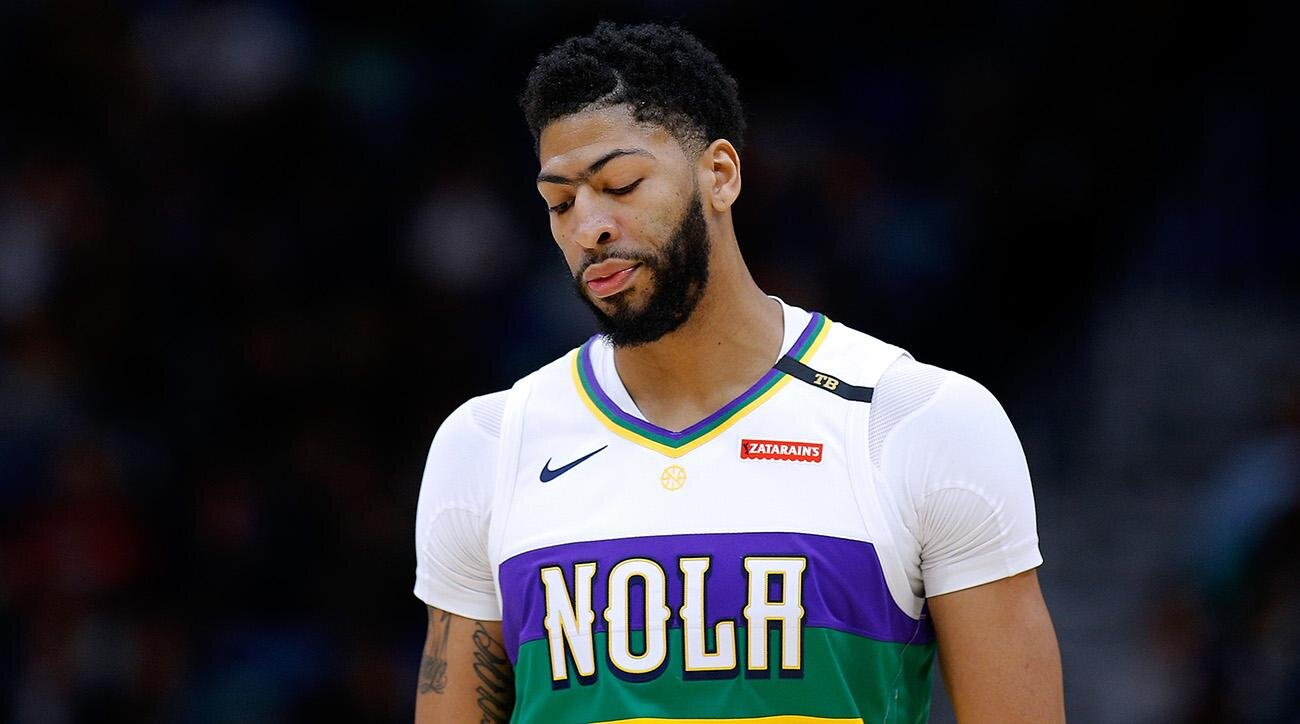 James Harden extended his own historic run, dropping 42 points against the Thunder, eclipsing 30 points for the 29th straight game — two shy of Chamberlain for the second-longest streak in NBA history, but far behind Chamberlain’s record run of 65 games.

Kyrie Irving underwent an MRI this morning at New England Baptist Hospital and has been diagnosed with a strained right knee. His status is day-to-day.

The Indiana Pacers announced Sunday they have signed free agent guard Wesley Matthews to a contract. Matthews appeared in 45 games and made 44 starts for the Dallas Mavericks and New York Knicks this season while averaging 12.8 points, 2.3 rebounds and 2.3 assists per game.

Salah Mejri has re-signed with the Mavericks, tweets Tim MacMahon of ESPN. Mejri was waived Thursday to open a roster spot so the team could complete a deal that sent Harrison Barnes to the Kings.

Los Angeles Lakers president Magic Johnson said the New Orleans Pelicans operated in bad faith during negotiations with his team over a deal for superstar Anthony Davis. However, he said he isn’t dwelling on the trade deadline failure and wants his players to shift their focus forward as well.

Magic Johnson plans to hug it out with the Los Angeles Lakers to help them cope with the fallout from the NBA trade deadline. “It’s a part of business, it’s a part of being a professional athlete,” he said Saturday. “I’m going to hug ’em and tell them that we got to come together and our goal is still in reach, which is to make the playoffs.”

After 10 days of team-wide uncertainty during their widely reported pursuit of disgruntled New Orleans superstar Anthony Davis, Rob Pelinka said he believes the Lakers will bounce back strongly. Pelinka already saw signs of it Thursday night, when Los Angeles beat Boston on Rajon Rondo’s dramatic winning basket just a few hours after the deadline passed and Davis remained with the Pelicans.

Kyle Kuzma dropped an impressive 23 points in the first quarter on Sunday afternoon at Philadelphia. The performance was most points scored in a single quarter by any Lakers player since Kobe Bryant dropped 23 in the fourth quarter against the Jazz back in 2016 — which was also Bryant’s final NBA game.

Anthony Davis is showing he can still produce great numbers. He only needed 25 minutes to score 32 points in his first game for New Orleans since requesting a trade nearly two weeks ago. Davis also had nine rebounds and three blocks in a 122-117 win over the Minnesota Timberwolves on Friday night.

The Philadelphia 76ers made several moves prior to Thursday’s trade deadline. In the biggest deal, they sent Landry Shamet, Wilson Chandler, Mike Muscala and four draft picks to the Los Angeles Clippers for Tobias Harris, Boban Marjanovic and Mike Scott.

Sunday afternoon report from Shams Charania of The Athletic and Stadium, the Hornets have claimed veteran point guard Shelvin Mack off waivers from the Atlanta Hawks.

The Knicks interest in Kevin Durant is obvious. Their intent to go after him this offseason was solidified when they rid themselves of Kristaps Porzingis’ contract at the trade deadline. The rumors are certainly alive and well. Per Brad Rowland of Uproxx, the team ‘coincidentally’ used a picture where he is defending Mitchell Robinson in a season-ticket renewal promotion.

Otto Porter said Wizards management held a private meeting with him before the trade deadline and assured him that he would remain with the team, tweets Fred Katz of The Athletic.

The Raptors have agreed to a new multi-year contract with Chris Boucher, promoting him from his current two-way deal with the team, Shams Charania of The Athletic tweets.

During an appearance on Good Morning America, host and one-time Brady Super Bowl antagonist Michael Strahan said that he is in the camp that sees Brady as the “G.O.A.T.,” but Brady said it’s not a moniker he’ll be embracing anytime soon.

Brian Flores officially hired 16 assistant coaches to join him in his mission to turn around the Miami Dolphins, including Jim Caldwell as his assistant head coach and quarterbacks coach.

The NFL combine ahead of the 2019 draft is only three weeks away. In the meantime here is Mel Kiper Jr. first mock draft, which came out on Jan. 17.

NBC Sports veteran Bob Costas revealed he was removed from the network’s coverage due to comments he made about the NFL’s concussion problems.

The Raiders are negotiating with Oakland-Alameda County Coliseum officials to allow the NFL franchise to play its home games at the venue during the 2019 season.

The MMQB’s Albert Breer broke down the key dates on Murray’s calendar in Thursday’s Game Plan, with key benchmarks arriving soon in both his budding MLB and NFL careers. So what does Murray’s near future hold? Check out his schedule via Breer below.

February 15: A’s position players are due to report for spring training in Mesa, Ariz. Oakland gave Murray a $4.66 million signing bonus under an agreement that would allow him to play one last season of college football, then report to spring training for 2019. So if he doesn’t report next week, that’s a pretty big deal.

February 27-March 2: Quarterbacks go through their four days at the scouting combine in Indianapolis. Murray has been invited. Will he be there?

March 13: Oklahoma pro day. Like the combine and everything else, this one is in direct conflict with spring training.

March 14-April 19: In-house visits with teams, and private workouts. The workouts can actually spill into draft week, while the deadline for NFL teams to fly prospects into their facilities is a week before the draft.

March 20: A’s open their season in Tokyo against Seattle. As for their affiliates, the Triple-A Las Vegas Aviators, Double-A Midland RockHounds and Single-A Stockton Ports and Beloit Snappers all open up on April 4.

The Giants have emerged as a serious contender for Bryce Harper in the past week, but USA Today’s Bob Nightengale writes that the club has “no desire” to make Harper an offer approaching the 10-year, $300 million deal he reportedly rejected from the Nationals in September.

Chicago White Sox reportedly made a $175 million offer to Machado earlier this offseason. The offer is still on the table.

Free-agent left-hander Dallas Keuchel asked for a six- to seven-year contract worth $25MM to $30MM per annum at the beginning of the offseason but has yet to sign a contract. Entering the offseason, MLBTR predicted an $82MM guarantee for the 32-year-old Keuchel.

A’s star third baseman Matt Chapman will be slowed by ongoing rehab this spring, but don’t count him out from the club’s March 20 regular-season opener against the Mariners in Tokyo.

Athletics righty James Kaprielian suffered a setback in his shoulder and will undergo an MRI.

Reliever Alex Wilson had interest from 10 or 11 different clubs, different minor league options Before the Indians signed him.

Any of the following Wil Myers, Manuel Margot, Hunter Renfroe, Franchy Cordero, Franmil Reyes and Travis Jankowski are all in the mix for a spot in the Padres outfield.

Brett Lawrie is mounting a comeback with the organization that got him started. The former first-round Draft pick announced via Instagram on Saturday that he’d signed with the Brewers. Lawrie, 29, hasn’t played organized baseball since the White Sox released him in March 2017.

The Royals announced on Saturday that they signed veteran right-hander Homer Bailey to a Minor League contract. Bailey, the seventh-overall pick in the 2004 MLB Draft, pitched his entire career with the Reds before Cincinnati dealt him to the Dodgers in December for salary relief as part of a seven-player deal.

The Nationals signed free-agent starter Jeremy Hellickson to a one-year deal on Friday. Hellickson will earn $1.3 million in 2019, with up to $4 million in incentives.

One of the opening day questions for the DBacks will be if they can carry three catchers which they have in each of the past two seasons under this regime. Right now it would look like Carson Kelly, Alex Avila, and  John Ryan Murphy.

The Anaheim Ducks fired coach Randy Carlyle. Bob Murray, the team’s general manager, will serve as interim coach for the remainder of the season.

The Toronto Maple Leafs have signed their young superstar to a huge contract, inking a five-year extension with Auston Matthews. The deal will carry an annual average value of $11.634MM, and be paid almost entirely in signing bonuses. Leafs have acquired defenseman Jake Muzzin from the Los Angeles Kings. Going the other way is a package of forward prospect Carl Grundstrom, defense prospect Sean Durzi, and the Leafs’ 2019 first-round pick.

The Chicago Blackhawks have put defenseman Luc Snuggerud on unconditional waivers for the purpose of contract termination.

JENNA WEST from Sports Illustrated reports Clemson still doesn’t know how three players failed drug tests ahead of the Cotton Bowl in late December, according to The Post and Courier.

Miami football is back! As Manny Diaz walked behind one of Miami’s returning players into a recruiting dinner last month, the player spoke up to no one in particular. “I feel like I transferred to a new school,” he said. Behind him, Diaz smiled. “That’s kind of what I wanted to hear,” Miami’s new head coach said.

Duke is investigating a sexual assault allegation made against a former player, according to ESPN’s Myron Medcalf. Former Duke student Meredith Watson claimed she was raped by a member of the basketball team in 1999, per her attorney’s statement. Watson also claimed Virginia Lt. Governor Justin Fairfax raped her during her time as a student.

On Saturday afternoon, the NCAA tournament selection committee continued its tradition (born way back in 2017) of offering the world an early glimpse at the top 16 seeds in the NCAA tournament if the season ended that day. One of this year’s more intriguing subplots among bracket prognosticators is just how much the NET rankings, which the NCAA introduced this season to replace the widely panned RPI, will impact the committee’s choices.

The Big Ten is ranked as the No. 1 conference on kenpom.com, a far cry from the fifth-place finish it had after a down 2017–18.

The Kansas Jayhawks have won 14 straight Big 12 regular season crowns, but road struggles have them sitting back in fourth with five weeks to go. Kansas State Wildcats cruised to the conference lead, punctuated by Tuesday’s home win over KU.

Indiana Hoosiers with a 13-11 record this season, and 4-9 in the Big Ten, and despite wins over three teams listed in the selection committee’s initial top 16, Indiana’s only realistic path to the field of 68 now probably runs through a Big Ten tournament title the Hoosiers have never won.

Lindsey Vonn walked off with her career haul of medals in her right hand, the gold, silver and bronze clinking together almost weighing her down. Whatever it was, the sound was a reminder of what Vonn has come to symbolize an athlete who battled back from one major injury after another throughout her career to win more ski races than any other woman.

Sports That Matters Powered By  INTERTOPS Sign-Up | Make a Deposit | Get Bonuses October 10, 2019 Dodgers fans were not happy with manager Dave Roberts and they let him hear it. The Los Angeles faithful booed Roberts excessively in Game 5 of the Nationals League Championship Series after a string of pitching decisions came […]

Headlines From Week 13 Of The NFL Season

The 2018 season seems like a perfect time for the 49ers to end their four-year playoff drought with two big advantages over the other teams in their division: They have a quarterback who has never lost and they’re going to play the easiest schedule in the NFC West. With the regular season still more than two months […]