Nationals sluggers Bryce Harper and Matt Adams were claimed by unidentified organizations on revocable trade waivers, according to Jorge Castillo of the Washington Post (Twitter link). They join fellow left-handed hitting Nats veteran Daniel Murphy as pending free agents who were not able to make it through the waiver wire.

The fact that teams were awarded claims on these players does not, of course, mean that any or all will actually change uniforms. There are always complicated strategies at play when waiver claims are made in August, and relatively few actually result in transactions.

Nevertheless, the claims do establish a timeline and process for determining whether or not these particular players will be dealt. Harper reportedly hit the wire on Friday, at the same time as Murphy and several other (then-unnamed) Nats players. It’s certainly possible, then, that these three situations will be resolved early this afternoon. Any players placed on waivers on Friday would be due for a decision today.

With regard to each player, the Nats can either work out a trade, revoke the claim, or allow the player to go to the claiming team for no compensation. As the D.C. organization continues to stare at a yawning gap in the NL East race, it clearly faces some difficult decisions.

It is difficult to imagine that the Nationals will simply allow another organization to take over Harper’s contract. After all, the homegrown superstar is a sure bet to receive and reject a qualifying offer this fall, putting the Nats in line to recoup draft compensation if they can’t re-sign him.

That said, salary considerations and the desire to restock the farm certainly cannot be dismissed as motivating factors. Harper is owed nearly $5MM between now and the end of the season. If the Nationals decide that hopes of clawing back into the NL East race are too remote to warrant further expenditure, then perhaps the team will be willing to engage in real negotiations with whatever organization claimed Harper.

Adams certainly seems likelier to move among the two players. He has devastated right-handed pitching, with a .264/.345/.538 slash and 17 home runs in 238 plate appearances taken with the platoon advantage. His $4MM salary is an easy one to stash in most budgets. And at this time of year, it’s not that concerning that Adams isn’t a terribly flexible defensive player. Organizations in need of the bench pop could surely juggle things for a few days before rosters expand on September 1st. And Adams looks to be quite an interesting postseason asset.

Notably, the timing does leave the Nationals with at least a bit of leverage and remaining wiggle room — particularly, with respect to Murphy and Adams. The club could still hold out for some kind of return, pulling the veterans back if nothing is forthcoming. Then, if the situation in the standings still seems desperate later this month, the Washington organization could place all or some of the players back on waivers — knowing, this time, that they’d lose them for nothing more than salary relief if a claim is placed.

The most interesting factor here, of course, is not yet known: which teams won the claims? The Nationals could be negotiating with any number of different clubs on these three players. Truly, it’s difficult even to guess with any degree of confidence. National League rivals had priority, in reverse order of winning percentage. All three players are plausible targets for a variety of contenders. Particularly with regard to a premium performer such as Harper, it’s even possible that a non-contender could have inserted itself into the process.

It’s also worth noting that, per Castillo, several other Nationals veterans were recently placed on revocable waivers. The list is said to include at least three additional pending free agents: starter Gio Gonzalez, right-handed-hitting slugger Mark Reynolds, and catcher Matt Wieters. Whether or not they cleared waivers has yet to be reported.

With the Giants slipping to a distant fourth place in the NL West, the team’s decision to place veteran outfielder Andrew McCutchen on waivers yesterday may be the starting point of at least a light, late-August sell-off. Though the San Francisco organization obviously could still pull McCutchen back — particularly in the seemingly unlikely event that the team is still considering making him a qualifying offer — there’s good reason to think that it may decide instead to let him join another club with brighter hopes the rest of the season.

McCutchen is still owed in the neighborhood of $3MM for the remainder of the season — hardly an insignificant amount of money. It’s enough, certainly, to force any team considering a move to think hard about whether the veteran is really a worthwhile upgrade and compelling fit. By Jeff Todd 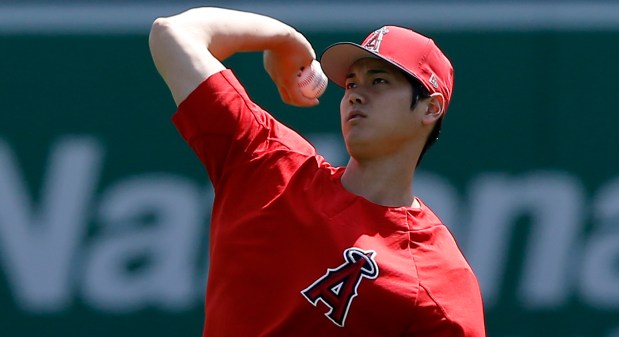 The Angels are hoping for Shohei Ohtani to pitch in the majors again this season, and he now appears to be fairly close to doing that. (AP Photo/Alex Gallardo)

Shohei Ohtani threw 29 pitches in a simulated game on Monday at the Angels’ training complex in Tempe, Ariz., and “all went well,” according to the Angels. Ohtani faced both right-handed and left-handed hitters during his outing.

Ohtani is rehabbing from a damaged ulnar collateral ligament. The Angels are hoping for him to pitch again this season in the majors, and he now appears to be fairly close. Since the Angels said he’s not going to pitch in the minors during his rehab, all that’s left is for him to do is another, longer, simulated game. Ohtani has had no setbacks in his rehab since he underwent a platelet-rich plasma injection on June 7.

Ohtani could return to the mound in September, even if he’s on a tight pitch limit, because by then rosters would have expanded enough that the Angels would have the bullpen depth to cover the innings.

Ohtani is expected to speak to the media on Tuesday before the Angels open a two-game series against the Arizona Diamondbacks. By  JEFF FLETCHER, Orange County Register 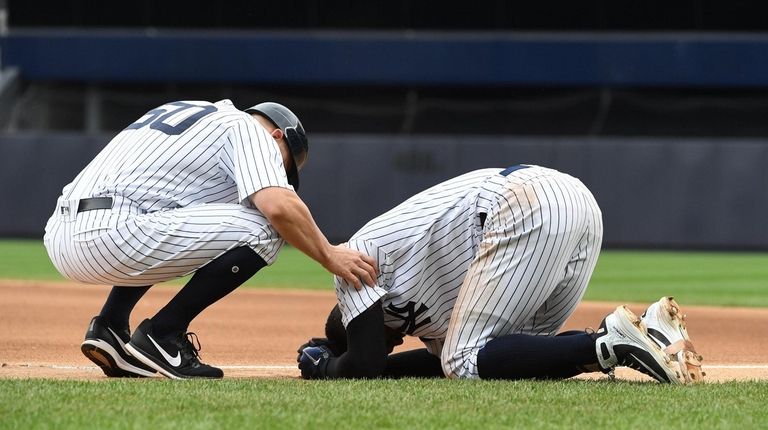 Yankees shortstop Didi Gregorius is down on the field as first base coach Reggie Willits checks on him during the first inning against the Blue Jays at Yankee Stadium on Sunday. Photo Credit: Kathleen Malone-Van Dyke

As expected, the Yankees placed Didi Gregorius on the disabled list with a left heel contusion on Tuesday.

Aaron Boone indicated after Sunday’s victory over the Blue Jays, a game Gregorius left in the second inning after a collision with Toronto’s Kendrys Morales, a DL stint would be likely.

Though Gregorius isn’t expected to be out beyond the 10 days – the club backdated the stint to Monday – it is another blow for the club’s offense that has taken its share.

The 28-year-old, who has played in 118 of 124 games so far, joins Aaron Judge (26 homers) and Gary Sanchez (14 homers) on the DL. Sanchez, recovering from a right groin strain, is expected to start a rehab assignment this week – perhaps as soon as Wednesday. Judge, out with a chip fracture in his right wrist, has a much less definite timetable as he’s still experiencing pain in the wrist.

Second baseman Gleyber Torres, a natural shortstop, could get time in Gregorius’ place, with Neil Walker getting the rookie’s time at second. Utility man Ronald Torres is an option at short and second as well. By Erik Boland, Newsday

Adrian Beltre, who knows something about playing third base, counts himself among Matt Chapman’s growing legion of fans.

Beltre, a four-time All-Star and five-time Gold Glove winner, offered a ringing endorsement of Chapman, the A’s third baseman, before Monday night’s game at the Coliseum.

“What I’ve seen and heard is this guy might be the best third baseman because of how quick he plays the position and how comfortable he feels in the big leagues already,” Beltre said to Texas reporters, expanding on what he told The Chronicle in September. Continue Reading by Ron Kroichick

When the Astros acquired suspended reliever Roberto Osuna it was viewed as a low-price move to bolster their bullpen. Now, it turns out, it was a move to get a closer. Manager A.J. Hinch said as much today, anyway, telling MLB Network Radio that Osuna is going to get most of Houston’s save chances going forward.

This comes the morning after a late innings loss to the Mariners. The closer who Osuna is going to take over for — Hector Rondon — didn’t even pitch in that game, with the damage coming on a three-run Robinson Cano homer off of Collin McHugh. Rondon has blown saves in two of his last three appearances, however, coughing up runs against the Mariners at home on August 12 and against the A’s this past Friday.

Osuna has made five appearances since joining the Astros, allowing one run, striking out three and walking one in five innings of work. Before that he saved nine games for the Blue Jays prior to his domestic violence suspension.

Pawtucket has been the home of the Red Sox’ Triple-A affiliate since 1973. There have, over the years, been some threats that that might change, but they’ve amounted to nothing. Until now. Get read to welcome the Worcester Red Sox. From the Boston Globe:

[T]he Pawtucket Red Sox said Friday that they had signed a deal to move to Worcester, ending an era for the minor league affiliate in Rhode Island that dates back to 1973.

PawSox chairman Larry Lucchino said the team signed a letter of intent with the city to build a nearly $90 million, 10,000-seat stadium that would be open for baseball in 2021.

I just assumed “Worcester Red Sox.” The article says that Lucchino is considering the “Wooster WooSox” as a nickname. I’ll leave it to those of you with a vested interest in Red Sox minor leagues teams to weigh in on that.

And yes, the stadium will be paid for with tax dollars and other public funds, because of course it will be. By Craig Calcaterra

February 21, 2020 Former Houston Astros pitcher Mike Fiers says he has received death threats after he exposed Astros’s 2017 sign-stealing scheme. “Whatever, I don’t care. I’ve dealt with a lot of death threats before. It’s just another thing on my plate,” the Oakland Athletics pitcher told the San Francisco Chronicle on Thursday. Houston Astros owner Jim Crane has had a less-than-ideal […]