Bryce Harper, who said he was tired after taking his cuts in the first round, certainly appeared gassed in the final round. So, too, did his dad, who was throwing to him. But Harper caught fire, going on a tear and tying Kyle Schwarber with 18 home runs before time expired in the final round of the 2018 Home Run Derby. Harper unlocked 30 seconds of bonus time by hitting two home runs at least 440 feet. With his second swing in bonus time, Harper homered to straightaway center field for No. 19. He tossed his bat in celebration, grabbed his trophy, then gave it to his dad before he was mobbed on the field by his All-Star teammates.

Harper hit 13 home runs in the first round, eliminating Freddie Freeman and advancing to the semifinals. In the semis, Harper topped Max Muncy 13-12 to advance to the finals. On Schwarber’s side of the bracket, he bested Alex Bregman 16-15, then defeated Rhys Hoskins 21-20.

Harper is the first member of the Nationals (or Expos) to win the Home Run Derby. Harper participated in the 2013 Derby but finished in second place behind Yoenis Céspedes. Harper is also the first left-handed hitter to win the Derby since Prince Fielder in 2012. The only players to win the Derby in their home park are Todd Frazier in 2015 and Ryne Sandberg in 1990.

As a spectator, the 2018 Home Run Derby was tons of fun. The four-minute clock adds a lot of tension and intrigue even to the initial rounds. Seeing teammates cheer and get excited for their teammates in the Derby is really fun. Of course, watching dinger after dinger is cool, too. Can’t wait for next year, By Bill Baer, NBC Sports

Too many days this season, Bryce Harper has looked more like a young athlete saddled with a terrible burden than a superstar on the precipice of an adventure. He’s hitting .214. The Washington Nationals are playing below expectations. And his manager, Dave Martinez, recently had to call him in and deliver a reminder of the importance of running out routine ground balls.

Somber, distracted and underachieving are never a good recipe for getting the most out of a free-agent “walk” year.

The stage was set for the Harper hometown Midsummer Classic, but given the walk year he’s having, should he really be front and center?

But the All-Star break can mean a reset for many, and Harper found some welcome sanctuary Monday night with a return to his two favorite places: (1) Nationals Park and (2) launch mode.

The 2018 Home Run Derby took on extra meaning for Harper, who participated in the event as a shoutout to the home crowd in what might be his final season in Washington. For sentimentalists, he brought along his father, Ron, as his designated Derby pitcher.

On the verge of an anticlimactic ending, the Harpers began a furious comeback with a nod and some family karma. Down 18-9 to Kyle Schwarber in the final round, Bryce went deep nine times in a span of 10 swings to tie it at the end of regulation. Then he drove the second pitch of bonus time over the fence in center field to win the thing, and all sorts of raw emotions came flooding to the surface.

As magenta steamers rained down from high above the stands behind home plate, Harper walked triumphantly down the first-base line with his bat raised high above his head. Then teammates Sean Doolittle and Max Scherzer came out and handed him the Home Run Derby trophy, and Martinez lifted him off the ground in a mammoth bear hug. It was a moment of sweet relief and unbridled joy in a season with too many negative undertones.

“It’s unbelievable,” Harper said. “We have some of the best fans in baseball, and to be able to do that with my family out there, that’s an incredible moment — not only for me, but for the organization and Nationals fans. I’m very blessed and humbled.”

The narrative is now familiar to fans who enjoy a side of economic intrigue with their baseball. The number $400 million has routinely been bandied around as a free-agent target for Harper, but it is mentioned less frequently these days, when his 23 home runs are offset by 102 strikeouts and a .187 batting average since the start of May. When Harper’s agent, Scott Boras, makes the case that his numbers are deceiving because defensive shifts are “discriminatory” to left-handed hitters, it’s a sign of how much ground he has to cover in the second half.

While Harper struggles, Manny Machado is having a more productive season in Baltimore and laying an early claim to the bigger payday in the offseason. The Nationals are 5½ games behind first-place Philadelphia and five back of second-place Atlanta in the National League East, and they’re going to have to pick up their play considerably to avoid being one of 2018’s colossal disappointments.

“I’m very serious on the field. I’m a very serious player. But off the field, I’m the kid you saw out there tonight.”Bryce Harper

Harper didn’t give much thought to using the Home Run Derby as a springboard to better things. He participated more out of a sense of obligation to the fans and stadium workers who have supported him since he joined the Nationals as a 19-year-old phenom in 2012.

“One of my favorite things is walking in and seeing the workers and really having that relationship with them,” Harper said. “It’s the security guy up front or the guy that works the parking lot. Those are the relationships that you love.

“I’m very serious on the field. I’m a very serious player. But off the field, I’m the kid you saw out there tonight. This wasn’t only for me and my family, but for the cook and the guy that works out front and the people that work upstairs. It was for the whole city of D.C.”

By Home Run Derby standards, the 2018 field lacked the prototypical star power. Three of the participants — Rhys Hoskins, Max Muncy and Schwarber — have yet to make an All-Star team, and Alex Bregman, Jesus Aguilar and Javier Baez are making their All-Star debuts this year. That left Harper and Freddie Freeman as the marquee entrants, and they were pitted against each other in the first round.

Harper came adorned in patriotic garb from head to toe — from his striped bandana to his red, white and blue compression sleeve and wrist band to his color-coordinated socks. His bat even came in patriotic colors and bore the inscription “We the People” on the barrel.

Harper fed off the crowd of 43,698 and eliminated Freeman and Muncy by identical scores of 13-12 in the first two rounds. By the time his turn came around in the final, the event had ascended to full-fledged baseball theatre. A camera caught Harper skipping down the runway and bounding up the steps like Rocky Balboa, and the crowd erupted when he emerged to take aim at Schwarber. 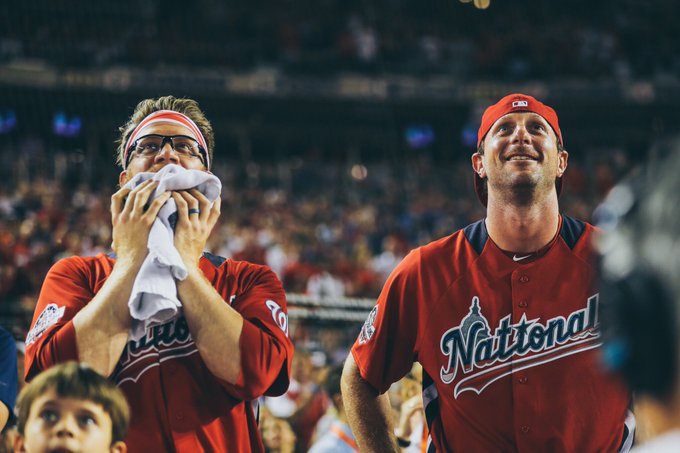 The outlook was grim when Ron Harper struggled to find the sweet spot and his son appeared out of sync with his swing. But with time running out, they suddenly flipped the switch and traveled back in time to Bryce Harper’s youth in Las Vegas. The comeback was a testament to personal pride and muscle memory.

“He came through,” Ron Harper said. “He did great, so I’m really proud of him. I love him to death, man. He’s a great kid. You couldn’t ask for anything better.”

During the post-Derby news conference, Bryce Harper marveled at how “cool” the championship trophy is and expressed his gratitude to share the experience with his dad on the mound and his mom agonizing over every swing from the stands. The Home Run Derby has been around since 1985, and Harper, Ryne Sandberg and Todd Frazier are the only players to win the event in their home parks.

Harper fell short only when asked if he had won any other home run competition in his lifetime. He answered no, but his father set the record straight.

“Bryce has played in a lot of tournaments, and there’s one in Cooperstown at Dreams Park,” Ron Harper said. “There’s a 12-year-old home run contest, and he won it at age 11. The King of Swat, I think it’s called. I told him, ‘You were that guy tonight.'”

As MLB’s 2018 home run champion can attest, it’s good to be the king. But he doesn’t have to be the second coming of Babe Ruth. If Bryce Harper rediscovered a little bit of himself on Monday, the Home Run Derby will have more than served its purpose. By Jerry Crasnick, ESPN Senior Writer

The controversy: Bryce Harper, in defeating Kyle Schwarber in the Home Run Derby last night, didn’t follow the rules. Or else his dad, who was pitching to him didn’t. The rule in question is that the pitcher has to wait for the last hit ball to land before delivering the next one. Given that the Derby is a timed event, such a thing matters, of course, because the faster you get pitches the faster you can hit them out of the park. At least if you don’t get too tired first.

Harper’s dad was a bit quick with the final three pitches in the final round, allowing Harper to get to 18, tying Kyle Schwarber before winning it outright with his 30 seconds bonus time. Watch as Harper waves for his dad to deliver the pitch while the last ball is still flying. Continue Reading, Craig Calcaterra NBC Sports

Sports That Matters Powered By  INTERTOPS Sign-Up | Make a Deposit | Get Bonuses October 2, 2019 Oakland tabbed left-hander Sean Manaea (4-0, 1.21 ERA) to start the AL wild-card game against Tampa Bay. The 27-year-old Manaea was sidelined last year when the Athletics lost the wild-card game to the Yankees, and missed most of […]

Sports That Matters Powered By  INTERTOPS Sign-Up | Make a Deposit | Get Bonuses August 29, 2019 Chicago Cubs outfielder Nick Castellanos sits in front of his locker, slowly wrapping tape around his bats, while his mind is rapidly spinning. He still can’t get over those horrendous uniforms during Players Weekend. He hates the new […]