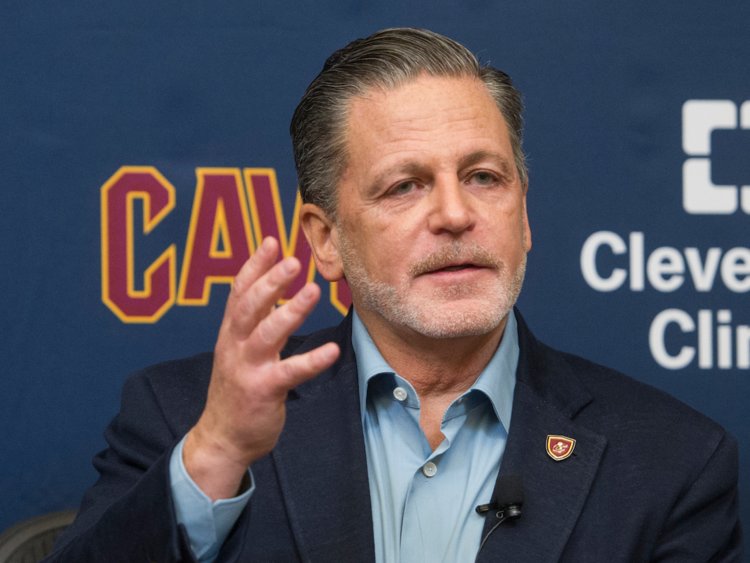 Dan Gilbert, who owns the Cleveland Cavaliers, made his fortune with his mortgage company Quicken Loans and now runs all his companies under Rock Ventures. Phil Long/AP

He makes many of his public appearances as the billionaire owner of the NBA’s Cleveland Cavaliers, but he’s also the chairman and founder of Rock Ventures, his holding company for over 100 businesses, including the Cavs, the real-estate company Bedrock that’s transforming downtown Detroit, and the company that first brought him major success, the mortgage lender Quicken Loans.

About 20 years ago, Gilbert decided to write down a set of principles that would define Quicken Loans’ corporate culture, resulting in the book of “isms,” — that is, “cutesy” sayings, as Gilbert calls them, representing bigger management ideas.

“It doesn’t matter, really, what we do because that could change or additional things could be added,” Gilbert told Business Insider for an episode of our podcast “Success! How I Did It.” “But it’s who we are, which guides decision-making, your actions, your behaviors.” By Richard Feloni

Warriors games on NBC Sports Bay Area averaged an 8.36 rating, a figure that is down 4 percent from last season. Cleveland Cavaliers games on FS Ohio placed second with a 7.98 rating (up 8 percent), followed by Oklahoma City Thunder games on FS Oklahoma with a 7.05 rating (up 7 percent).

The jump mirrors the NBA’s national TV partners that saw viewership rise 8 percent to a combined average of 1.28 million viewers, the best since the 2013-14 season. Viewership on ABC was up 17 percent from last year, with TNT up 13 percent, ESPN up 4 percent and NBA TV up 1 percent.

Sports Business Journal analyzed ratings data for 28 teams across the NBA. Information for Memphis and Utah was not available. Of the 28 teams, 10 were down, 17 were up and one was flat.

The NBA’s best ratings story is in Minnesota where the Timberwolves, making their first playoff appearance since 2004, saw their ratings on FS North jump 76 percent, the league’s highest jump. The Boston Celtics, bolstered by its trade for All-Star Kyrie Irving, saw a 44 percent ratings increase.

The 28-54 Brooklyn Nets had the lowest local rating for the fourth consecutive season with a 0.38 rating on the YES Network.

The Atlanta Hawks, with the Eastern Conference-worst record of 24-58, saw the biggest percentage ratings drop of 53 percent, the team’s lowest mark since the 2006-07 season.

The Orlando Magic wasted no time introducing their crop of draft picks to their fanbase, even finding a way to integrate a partner into it in a unique way.

The Giannis effect is in full force in Milwaukee where the Bucks have cashed in on a new local TV deal with Fox Sports Wisconsin that will see its rights fee climb to $26 million next season.

The two sides agreed to a seven-year deal worth more than $200 million, sources said. As part of the deal, which still needs to be approved by the league, Fox will pay the Bucks $26 million for their rights next year, up from a payout that was in the low $20 million range last season.

With 4 percent annual escalators, the contract averages around $30 million per year. The deal falls in line with similar local NBA deals Fox Sports has signed recently. In March, Fox Sports Southeast signed a long-term deal with the Charlotte Hornets that carries an annual average value in the high $20 million range. By  John Ourand and John Lombardo

There is no hotter brand in sports than the Golden State Warriors, a team that has dominated the NBA the past few years both on and off the court as it collects Larry O’Brien trophies while also building a $1 billion arena in San Francisco. Playing a crucial role in the team’s business success is Jennifer Cabalquinto. By  John Lombardo

Never heard of Wish Shopping before LeBron’s decision last week? Don’t worry, you are about to hear a lot more about them. With placements at the World Cup and now their logo on the jersey of one of the most marketable athletes in the world, Wish is getting what they wished for.

According to MVP Index, the Warriors new lineup has a social value of $148 million. That sound you hear is the team’s social media staffers celebrating selling branded content initiatives to partners.

After Goodyear saw the most value of all NBA jersey sponsors last year according to GumGum Sports, Wish Shopping is in for a treat now that LeBron James will don a jersey with their logo adorned on it. Given the startup is spending between $12-14 million a year on the deal, the presence of James alone makes it worth it.

Sure, LA gets a superstar, but Wish Shopping, who will pay $26 million over the course of the next two years for a patch on the Lakers jersey, has to be smiling pretty big right now.

After announcing his decision to sign with the Lakers, some season tickets rose nearly 40% on the secondary market.

Why it’s important: Outside of Tiger Woods, there might not be an athlete today that moves the needle more than LeBron James. While brokers in LA are rejoicing, can you say extended holiday vacation? The brokers in Cleveland are left with inventory that becomes virtually worthless. Although next season’s schedule hasn’t been released yet, StubHub already put tickets up for sale in zones for the Lakers first home game. The starting price? $550.

Sports That Matters July 23rd, 2019 Welcome back hope you had a great weekend. Thanks for stopping by! Don’t forget to sign up for our weekly newsletter (here) Major League Baseball deadline is July 31st. 1. NEWS Photo: AP Photo/Hans Pennink Mariano Rivera, the career saves leader and the first player unanimously voted into the […]

LeBron James has openly admitted that the way he announced his free agency decision in 2010 — via an actual televised special on ESPN — was a mistake, but that does not mean he will avoid self-promotion altogether this time around. According to a report from The Hype Magazine, LeBron is considering the possibility of […]

Michael Bari Show Daily April 30th, 2019 Welcome back have a great Tuesday! What’s New: The NCAA Wrestling Rules Committee recommended allowing wrestlers to compete in shorts designed for the sport and removing all language in the rules book regarding the length of a wrestler’s hair. The NCAA Playing Rules Oversight Panel has approved hydration […]